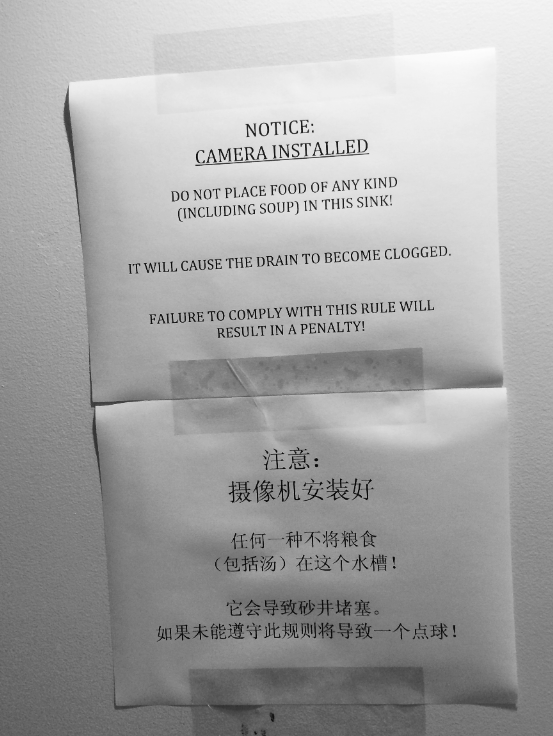 The offending sign posted anymously
on the second floor of Mason Hall.
COURTESY OF ZHOUYANG LOU

Students on the second floor of Mason Hall are offended. A sign showed up this week which read “NOTICE: CAMERA INSTALLED DO NOT PLACE FOOD OF ANY KIND (INCLUDING SOUP) IN THIS SINK! FAILURE TO COMPLY WITH THIS RULE WILL RESULT IN A PENALTY!” under which there was the same sign, but in grammatically incorrect Mandarin Chinese.

“It was really offensive of course,” said sophomore Yuxiao Pan. “I think it should not be in Chinese, and the Chinese is wrong. There were lots of grammar mistakes.

Students took issue with the assumptions made by the sign: that the Chinese students were responsible for soup being poured down the drain and that they could not speak English, despite attending an English-speaking university.

Luo added sticky notes to the sign that pointed out that someone Chinese didn’t necessarily put food in the sink. Another student circled the errors and pointed them out via sticky note.

Pan also felt the sign carried a generally rude sentiment, not just toward Chinese students. She thought it was condescending and impolite to the residents of Mason 2.

“I personally am deeply offended and as a DePauw community it is never okay to generalize people’s cultures,” said sophomore Mason resident Madison McIntyre.

As of now, the residents of the second floor of Mason do not know who posted the signs.