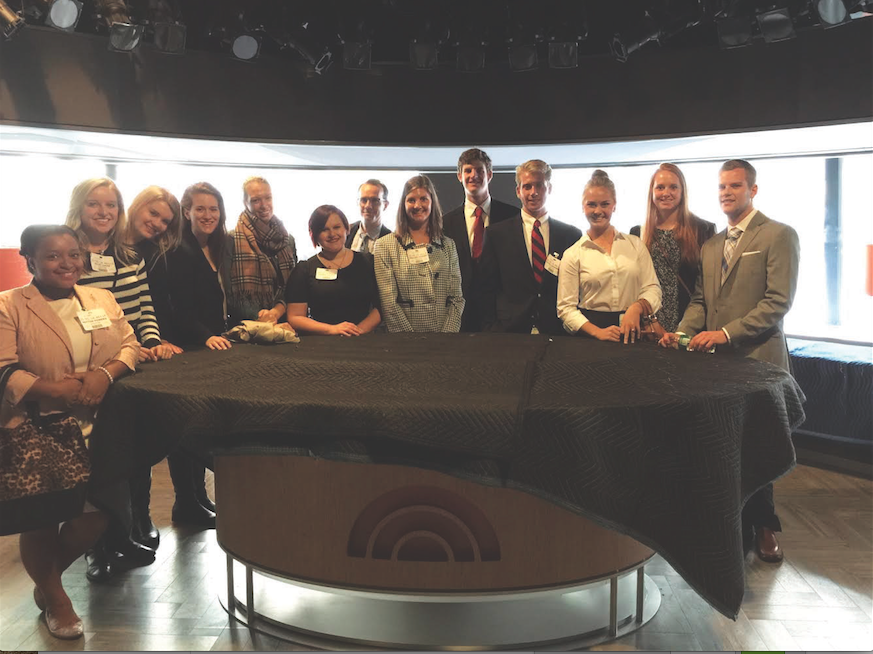 While some people were home resting over Fall Break, a group of 28 students and some faculty members traveled to New York City on a Career Exploration Trip.

"We took [the students] to four companies," said Jonathan Nichols-Pethick, director of the Media Fellows program. "We took them to Goldman Sachs, then we went to Spotify, NBC, and Time, Inc.."

Each company provided the group with a presentation discussing their work, including aspects of their jobs that would appeal to both the MoFos and the MeFes. They were also allowed to tour most parts of the buildings.

The group left from DePauw in the early morning hours of Sunday Oct. 19 and returned the evening of Oct. 22. Every morning was packed with tours and meetings at different companies, but nights were left open for free time.

For Morgan Weller, a Management Fellow, this was her first time exploring New York City. Her favorite part of the trip was visiting Time because she can see herself working there in the future. However, the most valuable part of the trip for her was networking with DePauw alumni.

"The first day, we went to an alumni networking event where we had the opportunity to chat with several DePauw alums who live and work in New York," Weller said.

The students were asked to prepare for the trip by not only researching the companies, but also by having questions to ask the alumni.

The group did a few other things together such as going to see the off Broadway play titled "This is Our Youth" starring Michael Cera and Kieran Culkin, and taking a tour of Wall Street. As the trip came to a close, the students were allowed more free time.

Uriah Brown, a first-year in the Media Fellows program, spent most of his free time seeing as much of the city as he could.

"I did a little shopping in Time Square," he said. "Two of my friends were actually in New York and showed me around Brooklyn. I got a chance to hook up with them and hang out. They showed me the city."

Nichols-Pethick hopes this short trip was useful for the DePauw students who attended; he looks forward to doing it again in the future.

"When I came back I was so tired that I couldn't imagine doing the trip again, but with some distance and some sleep, yeah, I would do it again," he said.