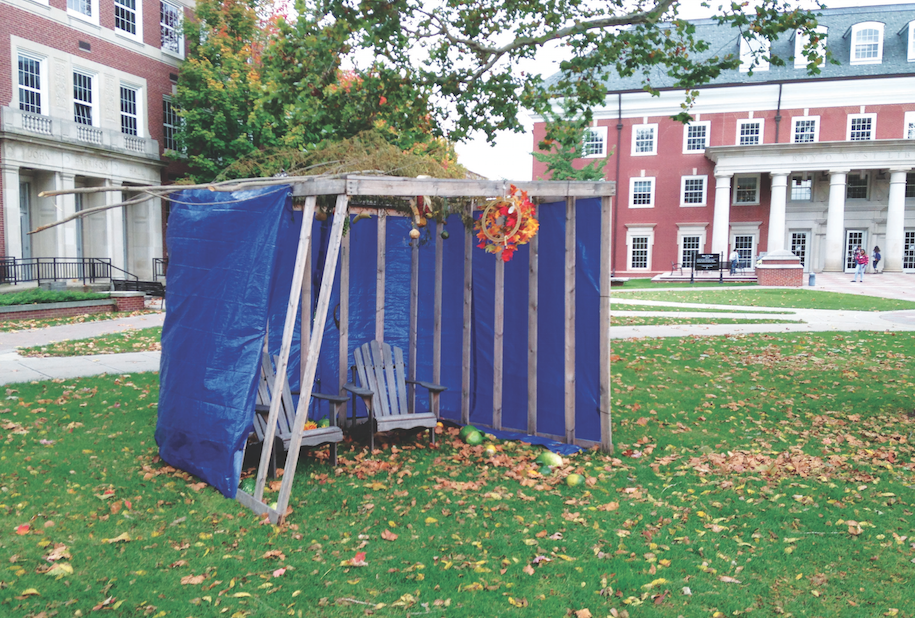 Though Peace Camp has packed up and the tents taken down, one large blue structure still remains standing in the Holden Memorial Quadrangle.

The structure is called a sukkah, which means hut, and is to commemorate the Jewish holiday of Sukkot.

“Sukkot is an extremely joyous holiday for the Jewish community,” said Lance daSilva, DePauw’s Jewish Life Coordinator. “The holiday immediately follows Yom Kippur, or the day of atonement, where we ask God for the forgiveness of all of our sins in the past year.”

The sukkah is a temporary dwelling meant to symbolize the types of huts the Jewish people constructed in the dessert after their freedom from Egypt.

“We are celebrating redemption,” daSilva said.

Sophomore AJ Wolfe, the current President of Hillel, DePauw’s Jewish organization on campus, said that Sukkot is one of the more festive holidays in Judaism.

“Grwing up, Sukkot was a time for gathering with friends and eating in the sukkah,” Wolfe said.

Sukkot is also a holiday to celebrate the harvest, since it takes place in autumn.

Within the hut there are lulav (“Fruit of goodly trees”) and etrog (“Branches of palm trees”).

“We shake the lulav and etrog in the sukkah in all four directions,” daSilva said, “to symbolize that God is everywhere.”

In addition to this, it represents the four aspects of the human, the heart, the eyes, the lips and the body.

“We are giving our whole to God,” daSilva said.

Though the sukkah on DePauw’s campus is set up infront of the library, they are typically set up in the yards of synagogues as well as the yards of people in the Jewish community.

DePauw facilities constructed the physical structure of two by four boards.  The decoration was done by Hillel.

A large part of Sukkot is helping other people and inviting them to eat and sleep in them.  The one on campus has two of the chairs from East College Lawn set up in it, as well as different vegetables.

“The sukkah deals a lot with themes like helping out the homeless and feeding people in need,” said daSilva. “It really worked perfectly having it around during Peace Camp this year.”

For many years the hut has been set up outside of the Center for Spiritual Life, but last year Hillel decided to move it somewhere it could be seen.

One of the concerns about moving it to the heart of campus, however, is vandalism. 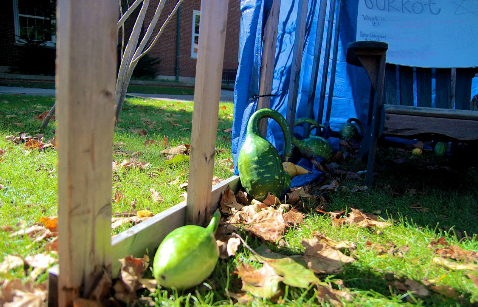 Gourds decorate the inside of Hillel's sukkah
in Holton Memorial Quad in observance of the
Jewish holiday Sukkot.
SAM CARAVANA / THE DEPAUW

“We haven’t had any issues with vandalism of ritual objects in the past,” daSilva said, “but I know there have been other vandalism issues on campus during big weekends such as Old Gold, Little Five and the weekend of Greek Gods and Goddesses.”

One of the main concerns is that non-Jewish affiliated students aren’t aware of what the sukkah actually is.

“I would like to know more about it,” said sophomore Megan Hadley.  But I think if students did know there is no way they would vandalize it.  For the most part I think students have respect for other religions, the furthest I can see anyone going is making a rude comment, not actually taking physical action.”

“We were happy to have the sukkah next to Peace Camp this year because we could educate people on the meanings behind it,” said Akmal. “The key to acceptance is education.”

Though daSilva lives in Bloomington and only makes the commute to DePauw once or twice a week, he says he has not seen any such vandalism to the sukkah so far.  The structure will be in the Holden Memorial Quadrangle until October 16.