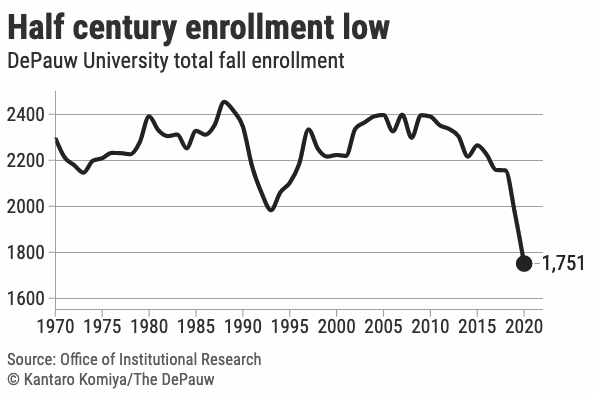 DePauw University’s enrollment has decreased by 25.6 percent since 2011.

The only time DePauw had fewer than 1751 students enrolled was after the Great Depression and before the 1960s, according to the book DePauw: A Pictorial History.

The decline in enrollment is not unique to DePauw. Ten out of the 12 liberal arts colleges within the Great Lakes College Association (GLCA) reported lower enrollment rates of first-year students this fall than they did two years ago, according to Terry Cowdrey, vice president of admissions.

Liberal art colleges across the United States have been facing challenges in decline, which can be correlated to increased tuition costs, concerns about student debt, and a shrinking population of young people. The impacts of COVID-19 have recently heightened all of these factors.

Each year, the DePauw admissions office collects data from students who are admitted but do not enroll. Students who do not enroll, primarily do so out of concerns for tuition and financial aid, better fit/ larger school/athletics, academic programs, and closer to home.

Led by President Lori White, the university has a strategic plan to guide DePauw in future decision-making and how the University lives out its values. This plan is in the beginning phases, according to Amanda Ryan, assistant vice president of admissions.

To address some of these issues, the admissions office has been doubling down on their marketing efforts, working with professors about advertising specific academic programs, and there is an alumni admissions program, including alumni referrals.

The goal of these efforts is to bring in classes that resemble the size of classes from 3-5 years ago. “National enrollment challenges are real, and it will take the help of the entire campus community,” Ryan said.

Between Aug.1 and Nov.15, DePauw has brought 590 visitors to campus. A number that Cowdrey says the admissions staff feels encouraged by.

Tours have had to adapt to COVID-19 restrictions. In the past, multiple families were allowed at a time, but, this semester it’s been limited to one family with one tour guide, and face masks are required.

“This year, all the people giving tours right now are really giving it their all, and I'm glad that DePauw brought back tour guides because people are giving and trying their best,” junior tour guide Kate Saunders said.

More students are applying and getting admitted to DePauw; however, those numbers aren’t translating to the number of students who actually decide to enroll. For the class of 2024, 5,490 students applied, 3,767 students were admitted, but only 382 students enrolled in the fall of 2020.

In response to this problem, Cowdrey said, “it's about helping students see the value in choosing DePauw. And, helping their parents too, because, in a lot of families, the parents are, you know, have an influence certainly in ultimately where their sons or daughters enroll. So that's kind of how I look at it.”

This year as of Nov. 16, 2020, DePauw has admitted 1,331 students and has 13 students who have already put their deposit down compared to 0 last year at this time. Usually, DePauw waits until mid-November to send out acceptance letters but, this year, merit-scholarships were determined earlier than normal allowing admissions to speed up their process.

One of the first future Tigers in the class of 2025 to commit was Caleigh Claar, who committed to play on the women’s lacrosse team last November.

Claar’s grandmother, Constance Claar ‘58, and father, Andrew Claar ‘94, both attended DePauw, which put the school on her radar.

Claar said the sense of community that she felt at DePauw when she visited in the fall of 2019  made her decision easy. “I can without a doubt picture myself getting everything I could possibly want out of my experience here, which allowed me to be so confident in my choice committing to play for the women’s lacrosse team.”

DePauw is competing with colleges across the country, which has pushed the admissions office to notify students as early as possible, and it’s part of the effort to bring numbers back up.

Due to COVID-19 complications, the admissions staff is no longer traveling for recruitment, meaning that applications can be reviewed sooner.

“It's exciting to be able to tell students earlier, especially since some students completed their applications in August,” Cowdrey said, “In past years because admissions staff were involved with recruitment travel until at least early November, application review did not typically begin until November.”