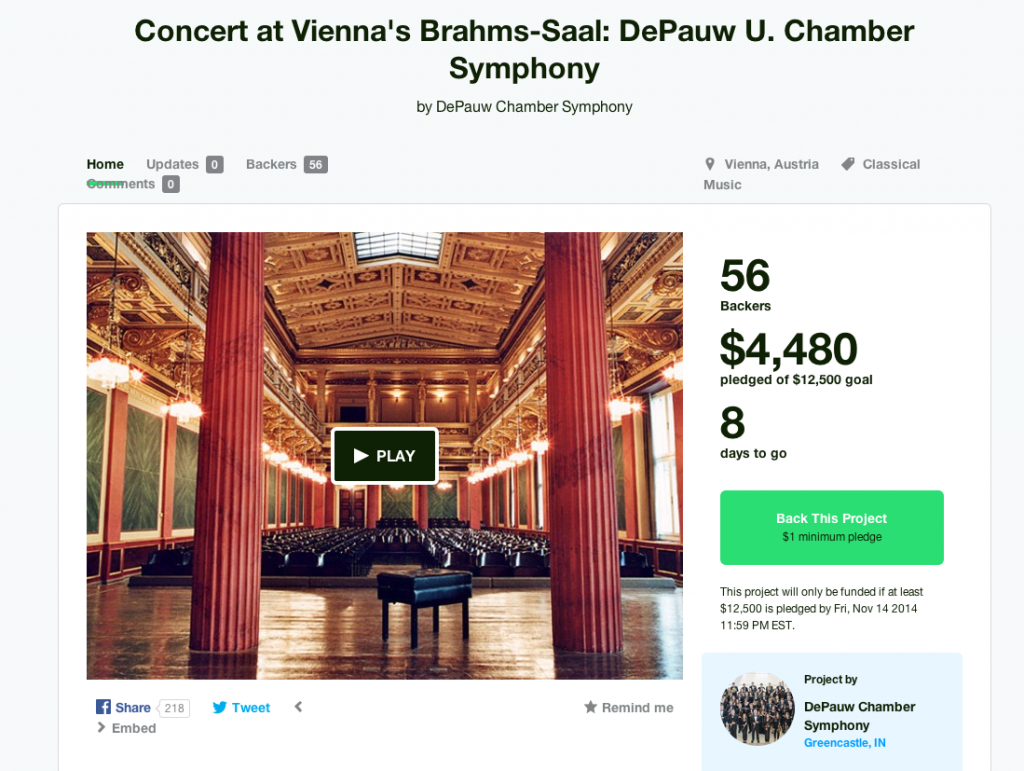 About every other year since 1975, the DePauw University Chamber Symphony goes on a touring Winter Term trip. The 2015 trip is going to Austria to perform around the country.

“Going out and focusing on performing for audiences you don't know, and winning them over, is a quality component in the development of our performing musicians at DePauw!” wrote Orcenith Smith, director of the DePauw University Chabmer Symphony, in an email.

In January, the DePauw Chamber Symphony has the rare opportunity to perform at the Brahms-Saal venue in the Wiener Musikverein, a concert hall in Vienna, Austria.

“The Brahms-Saal is one of the most prestigious venues in the world,” said senior music student Federico Papi. “It’s like the Carnegie Hall of Vienna.”

By the time the performance date had opened up for DePauw, however, the budget for the tour had been finalized, and the group had to fund their performance another way. They decided to use Kickstarter, the popular crowdsourcing website.

“We looked at the opportunity to crowd-fund as a part of the new curricular direction for the School of Music students, the 21st Century Musician curriculum that includes an entrepreneurship element,” said Smith “Students have designed the Kickstarter website and created the video information.”

The video, which was edited by sophomore flautist Eleanor Price, shows the symphony performing pieces by Johannes Brahms and Johann Strauss, Jr. and interviews with Smith, student musicians and the Dean of the School of Music, Mark McCoy.

“The thing I like most about international concert tours is that you never bring home the same group you left with, because it’s a life changing experience,” said McCoy in the video. “And we hope you help support us as we make this happen."

Price, who is among students going to Austria, was glad to be able to put together an important part of the web page.

“It gave me a chance to really contribute to the campaign and feel involved in the Kickstarter process,” she said. “Even if we don't succeed, I'm glad to know I did my part.”

If the campaign does not succeed, the orchestra will still be touring and performing in Austria including other prestigious venues.

“An early concert in the tour has the DePauw Chamber Symphony playing at one of Europe's most famous music conservatories, the Mozarteum in Salzburg,” Smith said. “We are the first American college orchestra to have played there in its Solitär Room."

The 33 students interested in the trip are sharing the link to their campaign, which includes a video and information on the Brahms-Saal, the DePauw Symphony Orchestra, their potential performance and campaign, which ends Nov. 14 and whose goal is $12,500.

The way Kickstarter works, if a goal is not met, then those trying to gather funding don’t get to keep any of the money raised. At time of printing, the campaign had 56 backers and has raised $4,480. According to the web page, the spot is reserved for the DePauw orchestra until the end of the fundraising campaign.

“We need to reach out to as many people as possible,” said Papi, who, though he does not plan on going on the trip, is helping with the Kickstarter campaign. “It would be a way for DePauw and the DePauw School of Music to gain visibility to perform at such a venue.”