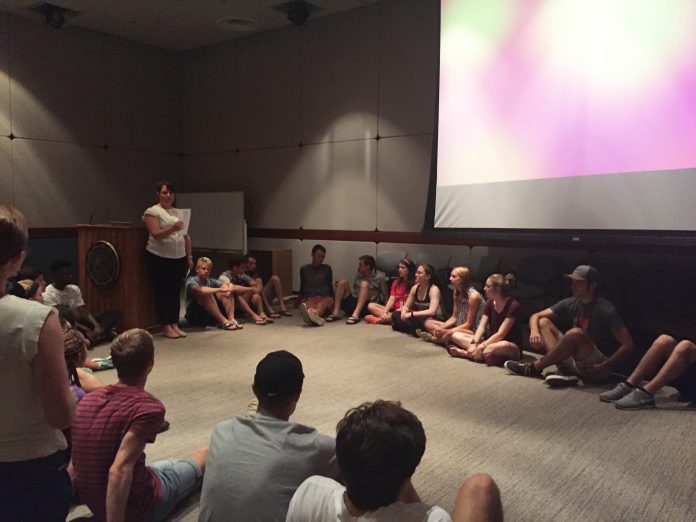 The DePauw University Campus Climate Team took steps last week to build a more inclusive campus environment following the Sept. 4 incident in Humbert Hall where a racial slur was written on the whiteboard of an African-American student.

The team offered each residence hall diversity and inclusion programs. “The Campus Climate Team (CCT) assesses the environmental impact that the bias incident has had on the community, develops programming and education as restorative measures, and works to prevent future incidents,” said Jeannette Johnson-Licon, Interim Associate Dean, Intercultural Life.

The residence hall programs were not required for attendance by residents, though participation was highly recommended by Resident Assistants. The program began with students watching videos on how to differentiate between a hate crime and a biased incident, which is a conduct, speech or expression by bias or prejudice. According to the video, a hate crime is a combination of a biased incident in commission of a criminal activity.

The video was also previously shown at the faculty meeting on Sept. 12, where President Mark McCoy answered faculty questions. “The BIRT (Bias Incident Report Team) team created the video that I showed at the faculty meeting and I had seen that an hour beforehand and I thought that was well done,” said McCoy.

The video was followed by a couple of different speakers who discussed the difference between a hate crime and racial bias. The videos and speakers sparked conversation among students and ended with a question-and-answer session with the speakers to addressing any concerns or ambiguities.

A RA, who wished not to be named, found the meeting very constructive for students and for herself. “It’s important to have these events because it gives everyone the same type of perspective and educational background in order to understand each other better,” said the RA, “It opens up the minds of students and allows different perspectives to be understood on how to handle these situations.”

Sophomore Quinci Miller, an RA at Hogate, found the meeting to be beneficial. “I really liked how the university split us up within our buildings and had us pair up with someone that we didn’t know. We would be a listener for the first minute and then be the speaker for the second minute,” said Miller. “It really opened up my eyes in being able to really listen to someone as well as be heard and feel like you have your own voice.”

Miller also felt the experience was an eye-opener for herself as well as students, some of whom have not been around a diverse student body and encountered such bias incidents prior. “I was really able to relate to a lot of the freshmen in the sense that they didn’t realize it was a bigger issue than just this one incident,” stated Miller, “A lot of them didn’t really know how to react in that sense, and it made me realize that we need to inform them more on why this is a big issue too.”

The programs have seemingly made a strong impact on campus, according to an anonymous RA. “Overall on campus, there has been a lot of unity. Last week with the “No H8” activities going on, Greek houses had banners supporting the program, and I think that’s something that’s really impactful,” said the RA, “It was nice to see those fraternities and sororities displaying something that has to do with the multicultural community.”

Students have spoken about divide between the different communities on DePauw’s campus. However, with the programs and activities last week, students said they feel these communities are beginning to grow closer. “There’s a lot more connections going on and I really hope that it stays that way because it can feel like there is a division between the Greek community, multicultural community,  and everybody else,” said the anonymous student, “There’s still not really that connection. However, one thing that has happened lately is a bridge being formed, and I hope it stays that way.”

Miller said the overall goal for the RAs was to ensure that their students understood that they have a huge support system to rely on at DePauw. “I really wanted the residents there to feel that they were heard and that all of their concerns and questions were answered,” said Miller. “I really wanted to express to them that, as RAs, we’re there for them, we’re their support system.”

The administration intends to create a climate where acts of hatred are less likely to occur. “We want to create world in which this kind of thing doesn’t happen,” said McCoy.

In addition, the administration is working on improving their responses to biased incidents across campus, especially as it was criticized for not acting quickly enough on the Sept. 4 incident. “It’s somewhere between a timely response mandated by the government and a campus-wide email,” said McCoy, “We’re all meeting on that to make certain that we’re all moving down the line.”

While the meetings overall had a positive goal in mind, not all of the students felt that they were entirely effective, especially in not attracting more students. First-year Humbert resident Jay Klein felt measures could have been taken to create a more efficient program. “The attendance was not as strong as it should have been,” Klein said. “I felt that not everybody thought it was important or relevant to them, but everybody needs to understand what went on and how they can help make it a safer place.”

Klein hopes in the future these meetings might be made mandatory instead of optional. “I would have hoped that all of Humbert showed up, but not everyone did,” said Klein. “I still feel like the problem has not quite been solved and not everyone understands the magnitude of the situation at hand.”