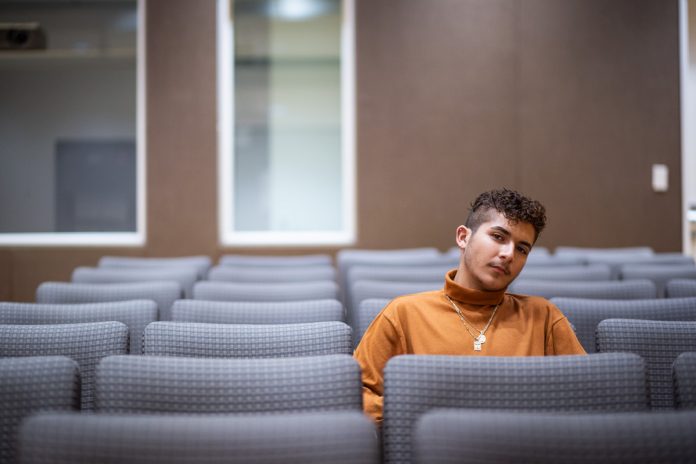 Moisés: Turtlenecks - it’s the season. I always feel like I have it together when I got a turtleneck going on. And then the jacket in part is just [because] it’s cold, but also denim’s making a comeback. Denim goes through weird phases. Sometimes it’s a move, sometimes it’s not. I think one of the controversies with denim [is that] some people [say] they have to match, but I don’t believe in that.

To bring it [back] to identity at DePauw, prior to [me] coming, I was used to wearing [a] uniform. It’s tricky because I think that a lot of a queer idenity can be expressed through clothing. But at the same time, I think of how I can perpetuate stereotypes too.

Byron: What do you mean?

Moisés: For me, I’ve always struggled with being in queer spaces because they’re very white-centered and within that comes a lot with socioeconomic class. So, a big thing for me lately has been how can I create a sense of a queer identity that doesn’t fall so much into the standards of how I should represent myself.

Byron: How do you think you should represent yourself?

Moisés: Well, I always struggle with this. But at the same time, I don’t think anyone can best represent what it means to be like self-identifying as queer and Latinx but me. And I think for me and thinking of fashion, this gets complicated for me real quick ‘cause I almost feel like I have two sets of wardrobes - one in the states and one in Mexico.

Byron: What’s the difference between them?

Moisés: I question if I should I be placing so much emphasis on what I wear. But it’s complicated because sometimes I do think it kind of projects the energy or the vibe I’m feeling for the day.

I was volunteering in Greencastle once and this customer walked in and he was telling me the clothes that I was wearing were too feminine or that I shouldn’t be wearing what I was. And really all I was wearing was a long flannel. But I had a crop top on. To me--it’s nothing new. I’ve come across that on the daily. 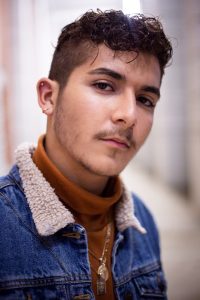 At first, I think I did police myself for awhile in terms of what to wear, because I was like, why deal with it? But then I realized it was much deeper in terms of discovering identity or a form of expression. To me, it was a form of rebellion.

Truthfully, depending upon the spaces I come across highly influences what I will wear. Once, when I had experienced an immigration ICE raid, I thought a lot about fashion. At that point, you’re wearing whatever you got on. And [I] remember being told how feminine my clothes appeared and how much risk that would run me. I would catch myself uncuffing my pants at the bottom or tucking in the sock or if my shirt was tucked in--bring it out. Situations like that kind of push you.

Byron: Does that discourage you from trying to be yourself or dress how you want?

Moisés:  I still subconsciously think about [what I’m going to wear]. And the [ICE Raid] experience taught me you really don’t know what spaces you’ll be in with whatever clothes you’re wearing. And it’s a tricky situation because here at DePauw, maybe we do have a culture or we do believe it’s a form of expression. But one thing I quickly learned was that you run a lot of risks with whatever you got on.