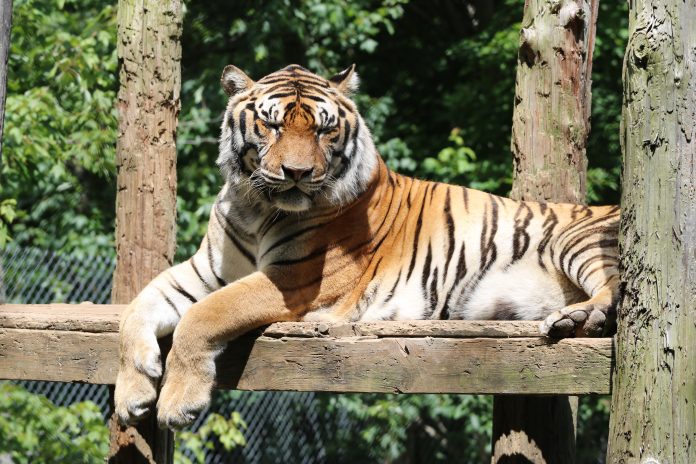 This Monon Bell season, make sure you’re a fan of the real tigers out there.

Earlier this month, the New York Times reported that a “man-eating” tigress was shot dead after two years of eluding capture in India. Last Saturday marked an end to “one of the most intensive tiger hunts in recent memory.”

The natural response is outrage, though the villagers in the area celebrated. Wildlife conservationists everywhere cry out for justice. The residents of Mumbai held rallies in opposition. People for the Ethical Treatment of Animals India are pressing for an investigation to be opened on the case.

So, what can we do here in Greencastle, Indiana?

The obvious answer is monetary. Donations to the Wildlife Conservation Society or the World Wildlife Fund are always appreciative. You can get creative with it! Get a printed tiger on your credit card (seriously)! “Adopt” a tiger with the World Wildlife Fund. Buy a calendar. Even follow these organizations on Instagram and like their ads. Every little bit of exposure helps.

Another important action is that of understanding. Understanding why tigers matter so much is key to their survival. The tiger plays an important role in preserving healthy ecosystems. These ecosystems support us in the way of fresh water and the meat that humans eat. The World Wildlife Fund also advises that tiger preservation is linked to forest preservation and carbon sequestration (or the way carbon dioxide is removed from the atmosphere) efforts. By helping tigers, you help humans too.

India matters so much in this discussion because, according to the BBC, the country holds 60 percent of the world’s tigers. Also, one of the main causes of human-tiger conflict is humans invading the tiger’s habitat. There have been several reportings of this invasion in India.

Another cause of human-tiger conflict is poaching. We’ve all seen the stereotypical tiger-head rug in the movies. It’s a shame that those actually exist and are one of the most sought-after poached items. Tiger body parts are supposedly used in medicine, too. TRAFFIC, an organization combating animal trafficking, says that “tiger bone, skins, claws, teeth, blood and others, often for use in supposedly ‘medicinal’ products.” Tiger claws and teeth are also used as common trinkets for jewelry and tourists to buy.

Boycott these products. No matter how cool a tiger tooth necklace looks or what the internet tells you drinking tiger blood can do for you, don’t buy it and don’t use it. Take the power from the poachers. If they have no demand, they’ll have no reason to supply. A living tiger is a lot cooler than a dead one.

The last big task I leave you with is to advocate. Tigers can’t speak out for themselves, so that makes it our responsibility as humans. Post on social media about it. Watch the news and pay attention to animal trafficking stories. Educate others so that we can end the pain for tigers everywhere.