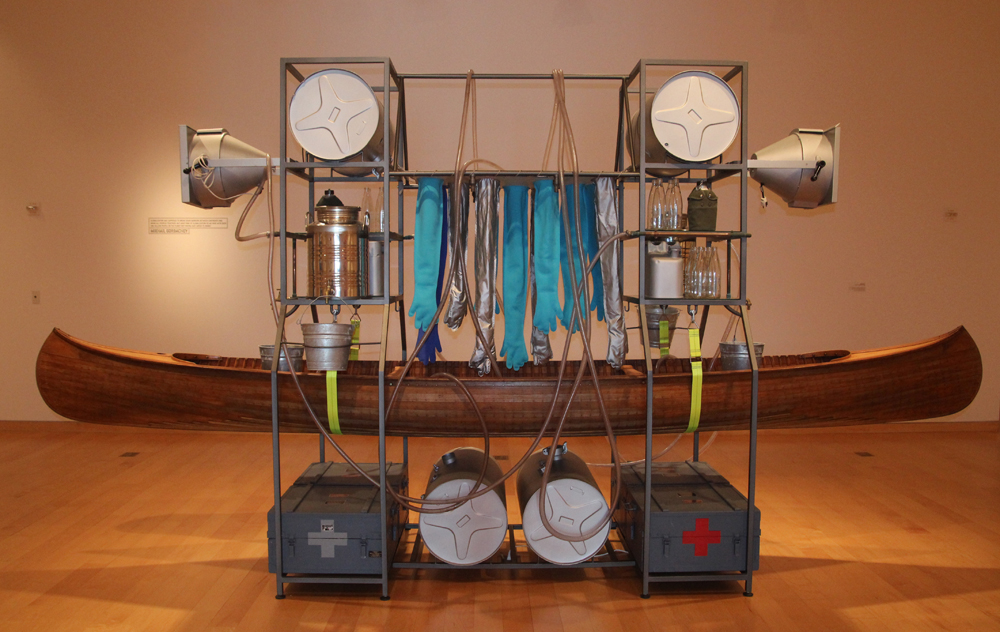 This event took place around the opening of Lucy and Jorge Ortas’ art exhibition Food-Water-Life that will be present in Peeler until the end of the academic year.

The Ortas’ use their artwork to create large public meals and open up conversation among members of the community. Their work deals with ideas of sustainability and thinking about where our food comes from. Some of the Ortas’ work that is currently on display in Peeler has been used on the street to collect, cook, and serve food to others.

The gallery talk was lead by Craig Hadley, the director and curator of exhibitions and university collections. The exhibition deals with the “21st century problems of humanity,” according to Hadley, and is broken up into three separate areas: food, water and human rights. Food and water are both on the ground floor, this area of the exhibit deals mainly with the ideas of food inspiring a closer community and the importance of clean drinking water for all. Around the exhibit are quotes, from people such as Nelson Mandela and Chinese proverbs, which directly interact with the ideas being presented in the Ortas’ work.

The upper floor deals with the idea of human rights, specifically the idea of: boarders, boundaries and being a global citizen. The Ortas’ went to Antarctica and colonized a small artist village, so show a world free of boarders. The Ortas’ “walk the line between artist and environmentalist,” said Hadley.

Students paid $5 and faculty $15 to attend the talk and dinner, with an estimated turn out of around 60 people. The meal that accompanied the gallery tour was inspired by the Ortas’ interest in the dialog that their work inspired.

The meal took place at the Prindle Institute for Ethics and was served by Bon Appetit, lead by head Chef Gordon Halls. The menu was an (almost) all-local meal. There was a local watercress salad with local granny smith apples, local crumbled goat cheese and roasted beats with orange citrus dressing. There were roasted local turnips, local grilled corn on the cob, and local asiago basil whipped potatoes and local roasted chicken with fresh local apple cider pan sauce. There were Hub cookies for dessert.

Patrons picked up cards as they left for Prindle that told them which of the five tables to sit at; tables included the broccoli table, tomato table and green bean table. Each seating card had a short fact about local food and the menu for dinner, along with a drawing of their vegetable.

The tables at Prindle were decorated with clay vegetables that were made in intro and advanced ceramics classes. Each attendee got to take home their ceramic plate, which was decorated by ceramic students, and members of the community during an open studio event held earlier in the semester, each portraying a different vegetable from the DePauw University Garden. Keeping your designed plates is an Orta tradition; some of their plates are on display at the start of the exhibition.

This meal was the brainchild of Professor Meredith Brickell. “Ceramic artists know how to bring people around a table for food,” said Brickell. Brickell and three students and one Peeler fifth year intern organized this event from the start of the semester, meeting once a week for thirty minutes each to organize and develop this idea into the meal and conversation.

“The goal of the dinner was to invite a critical discussion in our community about the issue of local food,” said Peeler fifth year intern Becca Zucker, who helped Brickell and the student coalition develop and present this dinner and talk. “We didn't seek to just celebrate local food; rather, we wanted to use the event of a meal to bring people together to talk about something they might not usually.”

Not all of those who attended were art students. “I came because my anthropology of food class,” Said junior, Danielle Wenning. “We have been more interested in eating locally and learning more about my food and where it comes from, eating locally and sustainable and kind of what that means.”

“I think this was a really unique opportunity that DePauw provided to teach its students about sustainable food options here on campus,” said junior, Leeann Sausser. “I loved how it brought so many people together from so many different backgrounds,” said senior Lauren Arnold. “It brought people together and got us to talk actively and proactively about food and ethics and work together as a community to serve our bodies the best.”

This was an event for all ages and majors. A truly enjoyable experience and one that those who attended hope is offered for years to come.