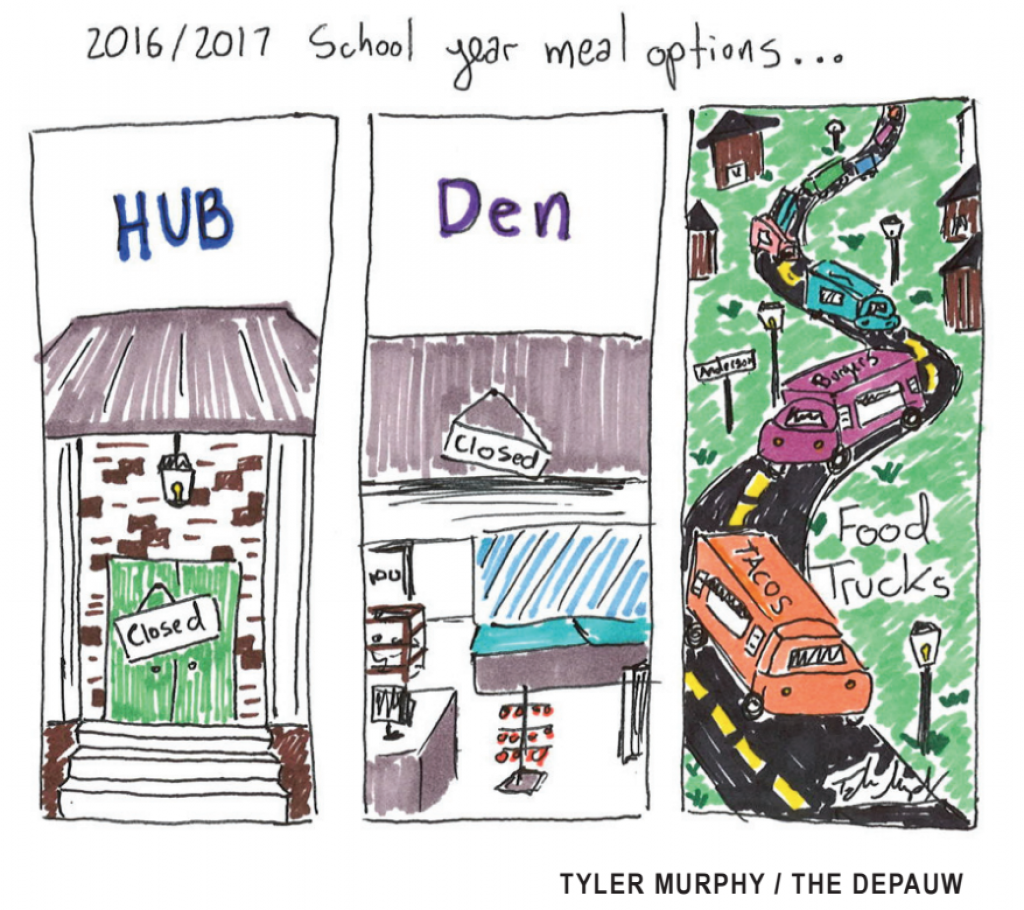 The Den, the Inn at DePauw’s social center and food trucks all have one thing in common: they’re potential solutions to the gap between the Hub and Hoover.

DePauw University’s administration is deciding whether or not to tear down the kitchen of Hub before the completion of Hoover Hall and what students would do in the interim period if it exists.

“We’re in the evaluation of options right now,” said Brad Kelsheimer, vice president for finance and administration. “We’re looking for a way to accelerate all that construction.”

This would mean tearing down the Hub immediately following commencement in May in order to get started on the plaza that will take the place of the current Hub kitchen and eating area.

“It buys you five months of warm weather to do outside work,” President Brian Casey said. “The sooner you can finish all of the construction the better.”

With an expected completion date of Oct. 31, 2016, waiting until Hoover is up and operating means delaying work on the plaza because of the impending winter.

It’s not just the plaza that would have delayed construction if the Hub kitchen stays up and functional come May. The second phase of renovations to the Union Building would also be delayed.

Kelsheimer believes the ending construction sooner rather than later will enhance the student experience.

“The sooner we have construction done and fences down on the south half of East College lawn the better,” Kelsheimer said. “And if there’s a price to pay for that then can we figure out how to get that done.”

Both Casey and Kelsheimer said that a decision has yet to be made as to whether or not the Hub’s tear down will proceed the opening of Hoover.  Both said that student ideas and concerns will be taken into consideration before making the decision.

“There will be some sort of an interim period,” Rose said.

“I know the school is exploring different options right now,” Rose said. “Once they come up with it, they’ll let me know. I’m kind of at the mercy of them.”

Rose couldn’t comment on what he believed to be the best solution.

“I have opinions, but ultimately they’re the deciding factor,” he said.

The question becomes where would students eat if the existing eating area in the hub is demolished before Hoover is ready for students.

“The problem is much like the library, where would people eat,” Casey said.

Kelsheimer said they are still exploring the options one of which could be using the Den, which is considerably smaller in size and expected to also close once Hoover opens.

“We’ve talked about keeping the den open for a period of time,” Kelsheimer said. “We could serve more out of there if we needed to.”

Using the social center at the Inn at DePauw is also an option.

“The seating capacity there is not far off from the hub right now,” Kelsheimer said.

Increased flexibility for out-in-town dining is another option on the table.

“That ties really nicely for some development that’s being planned for downtown,” Kelsheimer said.

Casey said that a student group will be formed to look at the options.

The final interim option discussed is Bon Appetit operating out of food trucks and quasi-permanent tents, much like those used for the world cup.

“I don’t know if that is an option they’re still exploring or not,” Rose said. “Nothing is certainly set in stone.”

Casey, however, laughed at the mention of food trucks being a possibility.

“We would not be eating out of food trucks,” Casey said.

“The Hub will still exist,” the employee said. “It just won’t be there.”