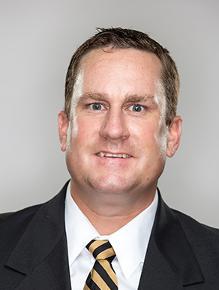 Coming from the bright lights of music row where country tunes fill the air waves all the way to the small, quiet town of Greencastle which he calls his home. Once atop the peak of the college baseball carousel, with a long resume of former players turned MLB stardom, all the way to Division III where the love for the game outweighs the stakes at hand.

The goal is still to win. That will never change, no matter the circumstances.

In his second season as head coach of the DePauw Tigers baseball team, Blake Allen is on a quest to change the culture of DePauw baseball. After five seasons as an assistant coach for the Vanderbilt Commodores in Nashville, Tn., one of the premier powerhouse programs in all of D1 College baseball, Allen looks ahead to a new chapter in his career. Formally a DePauw outfielder from 1996-97, Allen returns back to his roots.

From the very beginning, Allen knew he always wanted to be a coach.

“Growing up in St. Louis my dad coached me a ton. I just knew from then on that is what I wanted to do. I had great mentors and coaches that taught me the game growing up, and were positive influences in molding me,” Allen said.

He then assisted in both baseball and football at Franklin College for the 2003-04 year and served as recruiting coordinator.

Allen then took the big leap. He served two stints from 2004-08 and 2015-16 for a total of five seasons with the Vanderbilt Commodores with coaching positions that included first base coach, assistant hitting coach, bullpen coach and catching coach. In that time, Vanderbilt appeared in four NCAA regionals with a 210-101 overall record, while also securing a Southeastern Conference championship.

During his time at Vanderbilt University, Allen coached 45 players in which were selected in the MLB draft. Two of which became MLB all-stars.

Allen was mentored underneath the legendary coach Tim Corbin, who is currently in his 16th season at the helm for Vanderbilt baseball. Corbin, who was named coach of the year in 2014, the same year the Commodores won their second national title.

“It influenced me tremendously learning the game under Tim Corbin. He was the best organizer, the best leader of people that I have ever been around. He spent a lot of time training the mind more so than the baseball part of the game,” said Allen.” “Ultimately, he does both very well, but at the end of the day he is a great leader of young men, a great human being.”

He moved on from Vanderbilt to Western Kentucky University, where he served as the assistant baseball coach and recruiting coordinator for seven seasons (2009-15). In his time with the Hilltoppers, the team was ranked in the NCAA Division I Top 25 three different seasons and made one NCAA regional appearance along with a Sun Belt Conference title.

However, in 2016 Allen came back to DePauw as he accepted the head coaching position with the Tigers. The question at hand is, why come back to DePauw when he was at the top of the Division I baseball landscape? The answer is easy. Family.

“My family was the main factor. With three little kids, while I was at Vanderbilt and Western Kentucky, you don’t have the opportunity to see your family a whole lot,” Allen said.

A coaching position at the Division I level is a year around adventure. Starting in mid-February, a college baseball season can stretch all the way into late June. Countless road trips across the country and back is the life of a Division I coach. Not to mention the recruiting trips in the off-season, that are necessary if you want to stay at the very top year in and year out.

In his first season as the head coach with the Tigers, his impact was noticed. The Tigers finished the year 33-13, only two wins shy of tying DePauw’s baseball record of total wins in a season at 35 set in 2008.

“Coach Allen has brought a new competitive edge to our program, something that was missing in my first two seasons here at DePauw. With the successful season we had last year, you can see the impact he has already made on this team,” senior Collin Einerston said.

The team made the NCAA tournament for just the sixth time in school history, making it all the way to the NCAA Mideast regionals where the eventually fell to Cortland State, ending their remarkable run in Allen’s first season with the program.

“Our main goal is to continue to get better.  I just want to get this program in a direction that every year and year out we are competing for a conference championship,” Allen said.

His goal is to change the philosophy of the program, and it begins with the way the team trains.

“Increasing the speed in how we train and practice day to day is extremely important. At the end of the day, trying to train in a way to prepare your guys to be able to face anything that comes our way is important. That training aspect is the one thing that I have brought from Division I to Division III,” Allen said.

Recruiting solid baseball players is the next step.

“I have been really impressed with Coach Allen from day one. He gives us all confidence and is always positive, he wants us to enjoy ourselves and the game when we play. Off the field he is truly a person that cares about all of our lives,” freshman third basemen Sean Tully said.

As to whether this is the last stop for Allen in his journey across the college baseball coaching landscape, his answer was conclusive.

“I plan on being here for the long haul. We love depauw, we love indiana, my wife loves her job,” Allen said.