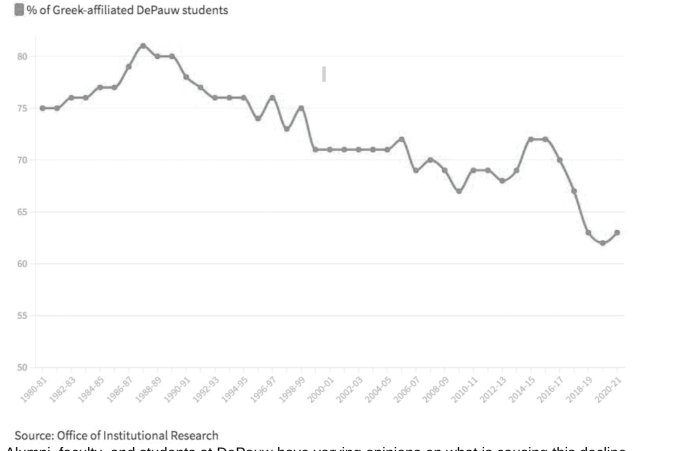 Despite growing concerns around a decline in Greek affiliation at DePauw, the results of the Interfraternity Council (IFC) and Panhellenic’s primary recruitment process that took place from Jan 28-31 revealed a consistent turnout.

265 men and women joined chapters, according to director of fraternity and sorority life (FSL) Frae Binder. This year's percentage of Greek-affiliated first-years at DePauw remains consistent with the 2020-2021 year at 53% according to the most recent data. The official numbers for the total number of Greek affiliated students has not yet been updated.

Due to COVID-19, this recruitment process looked different than years past, with the first two rounds being held virtually and the third round in-person. After recruitment was held entirely online in 2021, this year’s final round was the first official in-person recruitment event since before the pandemic.

Recruitment chairs, first-years, and faculty all agreed that although there were challenges with a hybrid recruitment, the weekend was overall a success.

Each chapter’s recruitment leaders were in charge of organizing both the virtual and in-person rounds for their chapters and agreed that it was one of their biggest challenges of the weekend since it had never been done in years past.

The recruitment chairs were tasked with coordinating zooms and breakout rooms, managing spaces for their members to participate, and ensuring potential new members (PNMs) were having positive experience.

Kelly Truax, junior and recruitment chair for Alpha Phi, said her chapter pushed to have the second round be in-person, but ultimately “understood that the needs of the other chapters were greater.”

First-years who went through the recruitment process this year, Madelyn Reinhardt and Kevin Dagvadorj, said they did not experience any issues during the virtual rounds of recruitment other than minor instances of weak wi-fi connectivity.

However, Reinhardt and Dagvadorj agreed that conversations over zoom felt less personal. Connor Gibson, sophomore and recruitment chair for Phi Kappa Psi, felt similarly, saying it was “challenging to have meaningful and genuine interactions with all of the potential new members” virtually.

As a sophomore, Gibson had never been on the other side of recruitment, making this year’s abnormal recruitment process even more difficult due to his lack of experience.

Emma Konrad, junior and recruitment chair for Kappa Kappa Gamma, also dealt with a lack of experience during the process as she was sworn into her leadership position only a few months prior to recruitment. “I was sort of learning as I went, but it turned out to be one of the best years yet,” Konrad said.

Truax, Gibson, and Konrad all said they felt supported by the other members of their chapter throughout recruitment, making these challenges less stressful. “People very much just pulled through with whatever circumstances were thrown at them,” Truax said. “They understood that the end goal was just to make this a good experience for the PNM’s.”

This recruitment was also the first for Binder in her new position as director of FSL. She credited much of the success of the weekend to these chapter leaders as well as DePauw students. “The collaboration and heart our students put into sharing their brotherhood and sisterhood with so many new students is just one of the many reasons I’m so thankful to serve as the FSL Director at DePauw,” Binder said.

Throughout the weekend, both chapter leaders and first-years felt motivated by the third round being in-person. “We were all excited that there was at least one day of somewhat normal in-person rush, '' Gibson said. “I think getting to have guys come over in-person for the third round was big for us as a house because we were able to have better, more genuine conversations in-person rather than on zoom.”

Reinhardt agreed that it was easier to make genuine connections during the third round.

“Being in person helped me to get a better feel for where I wanted to spend my next four years for sure,” Reinhardt said.

Truax credited a better overall experience in the third round not only to being in-person, but also FSL's support. “Frae placed a lot of emphasis on us recruitment chairs going back to our chapter and being like ‘make sure we show these PNMs who we truly are’,” she said.

Konrad was also appreciative of all the effort put into recruitment across campus. “DePauw administration, Panhellenic, the COVID mitigation team, and many others all did what they could to ensure recruitment was still happening, even with the COVID threat still prevalent…” she said, “…I would say all of the Greek life at DePauw is really grateful for that.”

Dagvadorj and Reinhardt both said the highlight of their weekend was concluding it with an in-person bid night. “The best part of the weekend was definitely bid night. I loved how welcoming it was and to finally have the process over and be where I wanted to be and for them to want me back,” Dagvadorj said.