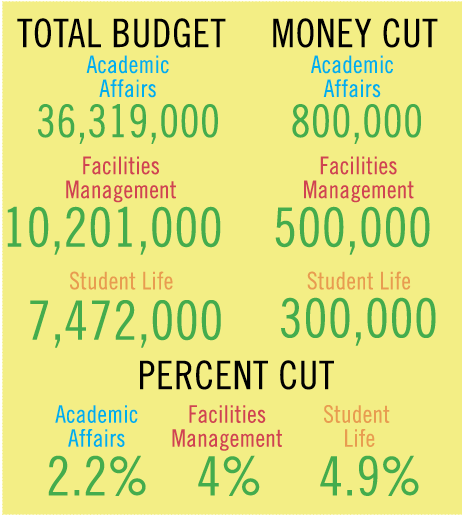 The financial fallout of DePauw’s small freshman class—a $2 million budget shortfall has affected everything from faculty development to the endowment.

According to Vice President of Finance and Administration, Brad Kelsheimer, the university lost an estimated $2 million after the Office of Admission missed its goal of total students for the incoming class. The freshman class of 514 was below the 650-projected number. Fewer students means less tuition income. With additional unforeseen expenses, DePauw was forced to make up a total of $3 million in total budget adjustments.

Kelsheimer was adamant that university wide cuts are not taking place.

“The overall amount of dollars we will invest at DePauw in costs will be higher this year than last year,” he said. “In every single division that is the case.”

DePauw’s day-to-day budget is consistently shifting because the various expenses and savings that occur throughout the year, he said. These unforeseen costs can range from building maintenance and broken steam lines to utility bill increases. There are few consistent numbers; most lines in the budget are in influx, according to Kelsheimer.

He believes it is best to decentralize the university’s budget, and avoids telling department heads and vice presidents where to trim or add.

“We set the general parameters, and the divisions have the ability to increase or decrease specific budget line items, and really control and own the budget,” Kelsheimer said. “I believe that’s essential.”

Vice President of Academic Affairs, Larry Stimpert, further explained the process. “We looked at what budget adjustments were going to be necessary for this current year based on the smaller class size,” Stimpert said. “Brad Kelshiemer and I talked quite a bit about what part of that cut needed to come from the academic affairs area, and we agreed on an amount.”

That amount was $800,000 a two percent decrease of the total academic affairs budget.  “That nevertheless left us the challenge of, how are we actually going to find the money we need for the coming year,” Stimpert added.

Stimpert opted to scale back funding from faculty professional development, which provides money for conferences, workshops and research, which take faculty away from Greencastle.  There will be less money for faculty members who go to conferences, but don’t present.  He also pulled back some of the funding to support sabbatical leaves for faculty members and additional funds for living expenses.  Stimpert ensured the reallocations would not affect faculty leaving this year.  The changes will, however, begin in the 2015-2016 school year.

Around $100,000 of reallocation cuts from academic affairs will result from tightening the faculty’s professional development policy, an almost 13 percent decrease from the 2013-2014 school year. Stimpert’s move has drawn criticism from faculty members.

Professor of Communication and Theater, David Worthingon, believes the re-allocations show “a lack of respect for the kind of efforts we put forth. In some ways, it’s saying you aren’t worth what we’ve been giving you. That doesn’t feel good.”

Chair of the Faculty, Bridget L. Gourley, believes vice president Stimpert, “might have been caught between a rock and a hard place,” she said.  “You’re not going to succeed with something if you don’t have lots of opportunity for early input.  [The faculty] certainly know after a change has been made.”

Worthington continued with similar sentiments, saying, “It wasn’t clear why it needed to come from this funding.”

Professor of English, Eugene Gloria, encourages Stimpert to be open to revising his changes.  “I hope these newly imposed changes are not etched in stone,” he said in an email. “I hope that calm, responsible conversations with a more varied faculty population can persuade him that the new changes are doing more harm than good.”

“What I tried to emphasize on Monday [at the faculty meeting] is we don’t want to see any faculty member’s scholarship or creative work suffer,” he said.  “The door is always open to conversations about their [the faculty] specific needs to support their scholarship.  We want to make sure we sent that message loud and clear to folks.”

Despite the backlash from faculty, Stimpert described DePauw’s overall program as “generous.”  He mentioned plans to increase what is commonly referred to as PDF or professional development funding for faculty in the coming years.  “This is $2,000 we give to every faculty member who requests it to support their research expenses.”  Furthermore, Stimpert plans to increase student-faculty research funding.  “That’s actually been declining lately, but ultimately that’s an area we need to increase the funding for that activity,” he said.

The results of the small class, however, are not exclusive to academic affairs. According to Kelsheimer, facilities management was forced to slash an estimated $500,000, nearly 5 percent, from its operational budget.  Most of the money came from the closures of Bloomington Street Hall and Senior Hall, however there are other ongoing conservation efforts.  Further, student life cut $300,000, or 4 percent, from of its budget.  An additional $250,000 of contingency funds was reallocated to other areas.

Kelsheimer said those three departments (academic affairs, student life, and facilities management) were the most affected areas. The re-allocations might have been worse if the Board of Trustees had not agreed to dip into the endowment to come up with $1 million to help mitigate the shortfall.

“It’s always going to be difficult to balance a budget at DePauw, probably,” Kelshiemer said.  “Difficult choices have to be made.  Prioritizing the student experience and employee base is important.”

Despite the number of reallocations, Kelsheimer was able to confirm the Board of Trustees granted faculty raises of 3 percent for the 2014-2015 school year.