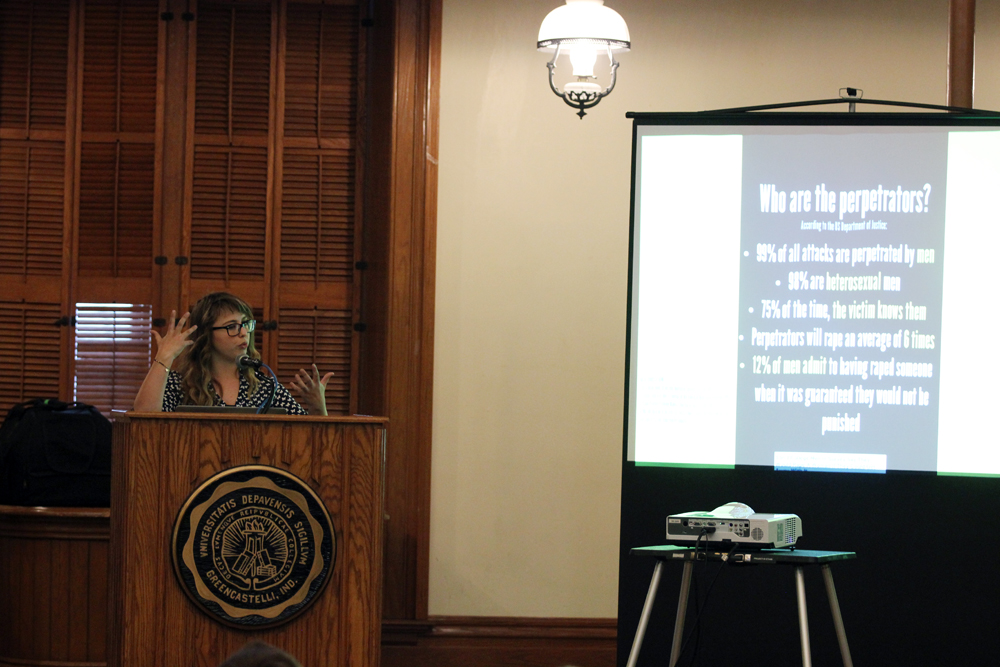 Blogger Laci Green breaks down the statistics of who
commits rape during her lecture Wednesday night. Green's lecture titled
"Taking Down Rape Culture" was a part of code T.E.A.L Week.
SAM CARAVANA / THE DEPAUW

Green served as the main speaker for Code T.E.A.L. week. The week’s activities are aimed to talk, educate, advocate and listen to the dialogue around sexual assault in an effort to eradicate it here on campus.

Code T.E.A.L was officially recognized by DePauw Student Government last semester after being around for three or four years, according to Student Body President Cody Watson.

“It’s one of those things where many of our great and upcoming leaders are really active in both student government and Code Teal—raising awareness for us, so we can raise awareness for the rest of campus,” he said.

Green’s talk aimed to “zoom out” and look at the larger theme of rape culture, instead of focusing on specific instances of sexual assault.

She defines this broader picture as, “a culture in which sexual violence is common, considered inevitable, there’s this attitude that there is nothing we can do about it, and so [sexual violence] is tolerated and excused.”

“I think that in any circle where rape jokes are told, it could be really harming for someone who has actually lived through that, and it indicates pretty clearly someone’s ideas about it,” said Green.

Charlie Douglas, junior and co-president of Code T.E.A.L., said, “This is a really important cause. I feel like a lot of people on campus have been affected by [sexual assault] or know someone who has personally been affected by it. So, if that is not enough of a motivator, socially it is something that we can fix.”

DePauw has a smaller student body than a lot of universities, but when The DePauw asked Green if she thought rape culture differed on smaller campuses she said, “I don’t think it’s any different.”

However In her speech, Green stated that multiple studies have found that rape is three times more likely to happen at fraternity houses.

“I think the campus overall has a lot to learn about consent and making sure that we are actively communicating about the lives we want to have here on campus," said Watson. "I think that a lot of the times it is very easy for us to take control of things such as classwork, or job searching, or those kinds of immediate things."

Yet, the crowd that night in Meharry had one overwhelming characteristic—most of those attended were female-identified.

The YouTube star shared some alarming statistics: 75 percent of the time, the victim knows the rapist; perpetrators will attack an average of six times; and 99 percent of attacks are perpetrated by men.

“Now this is where, in the conversation, a lot of walls go up. ‘Woah, woah, woah, you can put this all on men, you’re a man hater!’” she said.

When The DePauw asked Green what men on campus can do specifically to combat the stereotype, she said, “I think that first and foremost—this is for everyone—but especially for guys, it can be intimidating to enter this conversation [around rape culture] and people get defensive. People get upset, but if you come in with an open mind and open heart, come learn about it and raise awareness, you could become an advocate in your own community. It’s really that simple.”

Douglas, one of two male members in the Code T.E.A.L. organization, said, “Combatting rape culture starts with a conversation that is easy to start, easy to continue, and it might be awkward at times; but I think that is something that our culture has to accept and start talking about.”