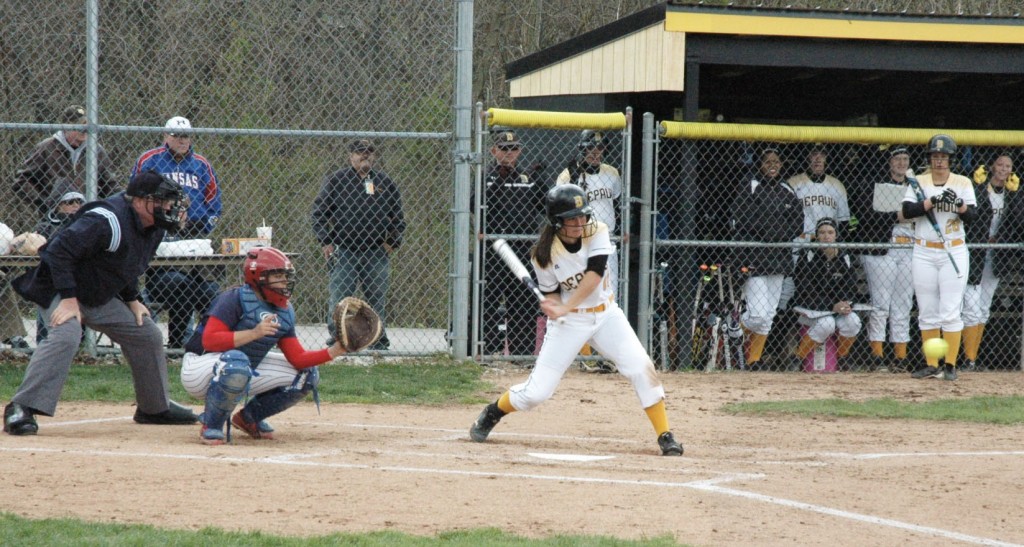 Gabby Smart, batting .346 overall and a .571 in conference play, lines up another shot in the Tigers sweep of Hiram on Saturday. KALEB VANARSDALE / THE DEPAUW

After getting off to a slow start in the regular season, DePauw softball made sure not to do the same with the beginning of conference play.

In the midst of 50 mph winds, the Tigers (8-11) dominated Hiram College (5-17), sweeping the doubleheader and outscoring the Terriers 14-1 over the two games.

“I think the two conference wins helped us calm down,” said first-year pitcher Brooke Bandy. “We played some tough teams early in the season, and it’s nice to know all that hard work paid off.”

“The team played with excitement, intensity and focus while staying loose,” Hanrahan said. “No one pressed the panic button when adversity reared its face.”

But there was little adversity at all.

DePauw broke out the bats early in game one, scoring three runs in the first inning. By the third, the Tigers had a commanding 7-0 lead, and would cruise to a 9-1 victory.

“We need to continue to score in every inning, because we play some strong offensive teams who could come back,” said senior first baseman Linsey Button, who knocked in two of the team’s runs. “[It’s] more comfortable to play with a lead, and increasing that lead only takes pressure off our pitcher and… defense.”

Much of the same was seen in game two.

After both teams failed to score through the first three innings, DePauw finally broke through. The Tigers took a 2-0 lead in the fourth and later added three insurance runs to win 5-0.

Bandy also produced a quality start, striking out six over five innings to pick up her third win of the season.

Gibson and Bandy, both ground-ball pitchers, were perfect fits for the day’s conditions, as they kept the ball out of the air.

The Tigers' sophomore ace Emma Baldwin was given most of the game off.

“[Emma] makes many hitters pop out because she has so much spin, especially on her rise ball,” Hanrahan said. “We knew that when the ball got in the air, it would be hard to track down and catch.”

Baldwin still made an appearance in relief, striking out four over two shutout innings to close the game for the Tigers.

“Honestly though, the wind came in bursts and… didn’t affect the pitching too much that I saw,” said Baldwin. “It did make it harder on the catchers, though, because the ball would move late sometimes with bursts of wind.”

The Tigers continue conference play today with another home doubleheader, this time against Ohio Wesleyan. The program has not lost to the Bishops since the 2012 season.

“[This past weekend] reminds the team that we are still the same people who have come out strong in conference each year, and this year should be no different,” Hanrahan said. “We perform in April and May at our best and they should believe that this year should be the same.”

First pitch of game one is scheduled for 4 p.m.