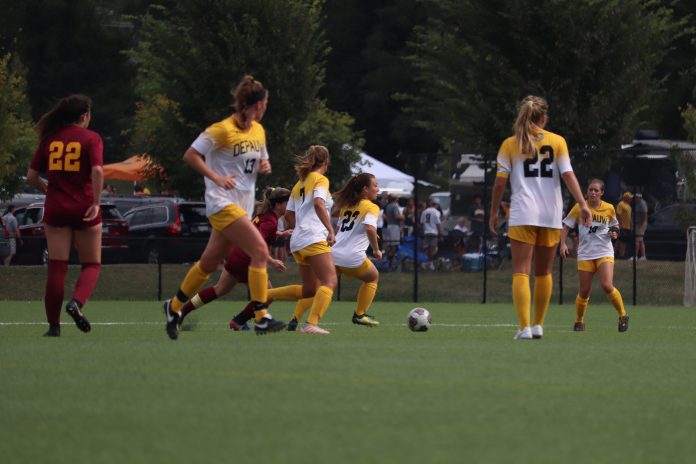 DePauw controlled the ball early on in the game through aggressive pressing and dominant ball possession. The Tigers’ offense created many chances to score in the first 25 minutes, with  a total of five shots compared to Kenyon’s one. The Tigers also had four free kicks on the Ladies’ half but could not find the net.

The game went on in favor of DePauw, but the Ladies caught up, creating layers of defensive lines to contain the Tigers’ well-positioned passes and started speedy counter attacks. Their tactics proved to be efficient as no goal was scored during the first half.

With support from midfielders, DePauw’s shooters continued to make chances from both long shots and headers, but Kenyon’s center-backs did not allow any goals. Goalkeeper Jillian Countey stretched herself to make saves for the Ladies. The first half ended goalless.

“I think we did a great job of creating opportunities for ourselves to score during the first half,” senior Shaili Kumar said. “We did all the right things, but the odds weren't in our favor to put the ball in the back of the net until the second half.”

Kenyon turned the game around in the second half. With loud cheers from the stands, they found the rhythm in the offense, forcing DePauw to defend. The Tigers did not lose control in Kenyon’s possession game. The defenders promptly tackled and cleared the ball when needed, reducing pressure on their defensive half.

Kenyon pushed hard to look for a goal but failed to do so. They put the Tigers’ goal in constant danger with 10 shots but senior goalkeeper Reanna Stiehler stood firm with her saves. While not having a favorable second half, the Tigers took advantage of Kenyon’s high backline to produce counter attacks.

As the game came to an end, DePauw found the late goal. With one minute left, senior Alex Berkley received the ball from a clearance. She smashed the ball 24 yards out into the bottom right corner. The strike was too powerful for Kenyon’s goalkeeper to block. The game ended 1-0 for DePauw.

Despite the win, coach Cristin Allen thought it was not the team’s best. “We do not prefer to play a game where our opponent has any chances,” she said. “The type of game we prefer to play is always where we dominate offensively, and defensively give up nothing. We want the game to be in hand for us and keep possession and control the flow.”

The Tigers were named the NCAC champions of the regular season with 20 points and also the only team with an undefeated record. “I think the first place standing means a lot to the team,” Stiehler said. “It shows the importance of good coaching and hard work, and how much that can impact a team just in one season.”

The Tigers will host Kenyon College for the semi-final of NCAC tournament on Nov. 6 at 7 p.m.