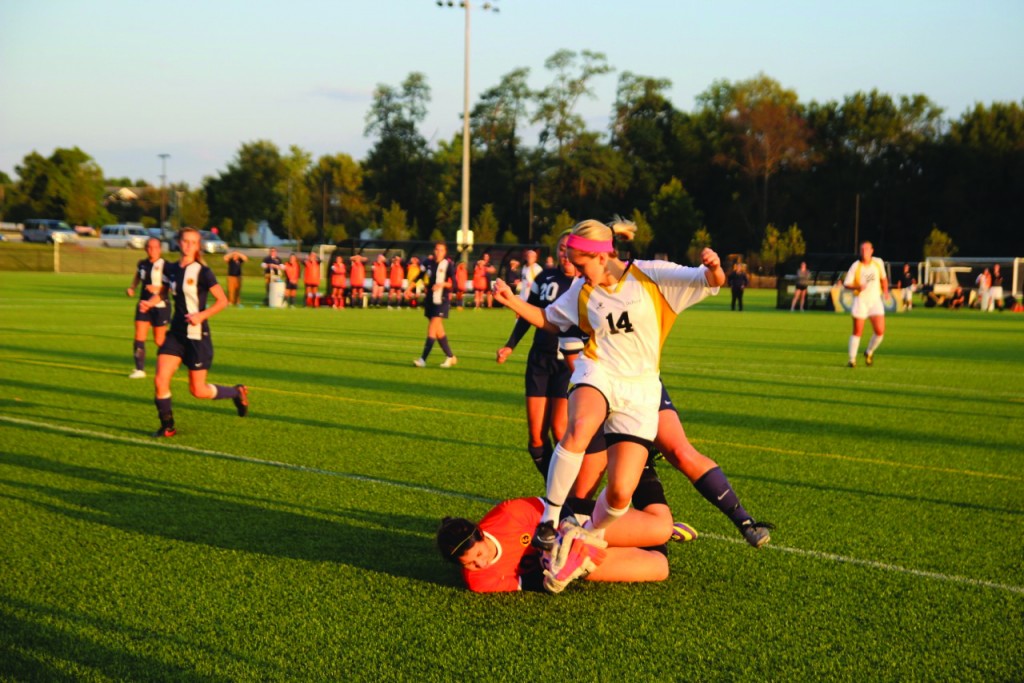 Both teams saved all of their action that night for after halftime.

“Our issue has been that we can’t put 90 minutes together,” senior goalkeeper Emma Cooper said. “We had a slow first half tonight.”

Five minutes into the second half, in the 59th minute, senior Stephanie Martin received the ball from senior Chloe Jacobs, dribbled around her defender and buried the ball in the back of the net.

“We were moving the ball a lot better in the second half,” Martin said. “We need to take care of the ball like that all the time.”

Later in the half, Allie Amato for Franklin received a yellow card, putting the ball back in the Tigers' possession, where they again attempted to attack the net.

Three Tigers crashed the goal, and Franklin’s goalkeeper collided with one of them, causing the ref to call a stop in play—exactly when Meredith Schoenfeld nailed a shot into the open net. The Tigers' second goal for the night wouldn't count. DePauw coaches and fans alike were not pleased with the call.

Franklin’s head coach kept calling out to his players “keep knocking at the door” as DePauw’s defense stopped them time after time.

Just as DePauw was about to close out the game, Franklin’s Jessica Silva fired off a shot and broke her ankle.

“I didn’t see it happen, but I saw the damage,” Cooper said. “I could see a couple of bones sticking out. It was rough.”

Silva's teammaes weren't the only ones affected by her injury. The Tigers sympathized with their opponents.

“Thankfully they got it all taken care of, and we’ll be praying [for Silva]," Martin said. "It’s just that when anything like that happens, it’s hard on not only the game itself, but everybody.”

After a 41-minute delay for the injury, the play resumed for the last 1:07 of the game. The Tigers held on for their second win of the season.

“It felt good,” Cooper said. “It was a little weird seeing as we had forty minutes of standstill. It didn’t feel as good as it should have given the circumstances, but it still feels good.”

In the second half, the Tigers maintained possession of the ball and gave themselves the edge in the game.

“We started working the ball more and took care of it,” Martin said. “That first half just hit us a little harder but we knew we had to pull things together and we did it in the second half. This was the second game where our first half wasn’t what we wanted it to be, we need to transfer how we play in the second half to the first half.”

In terms of the rest of the season, Martin has an idea on how to continue winning.

“We have to continue to improve our mental focus as the season goes on," Martin said. "As long as that improves we will have the ability to put 90 minutes together.”

The Tiger’s next game will be at Hiram College on Saturday evening as they open up NCAC play.