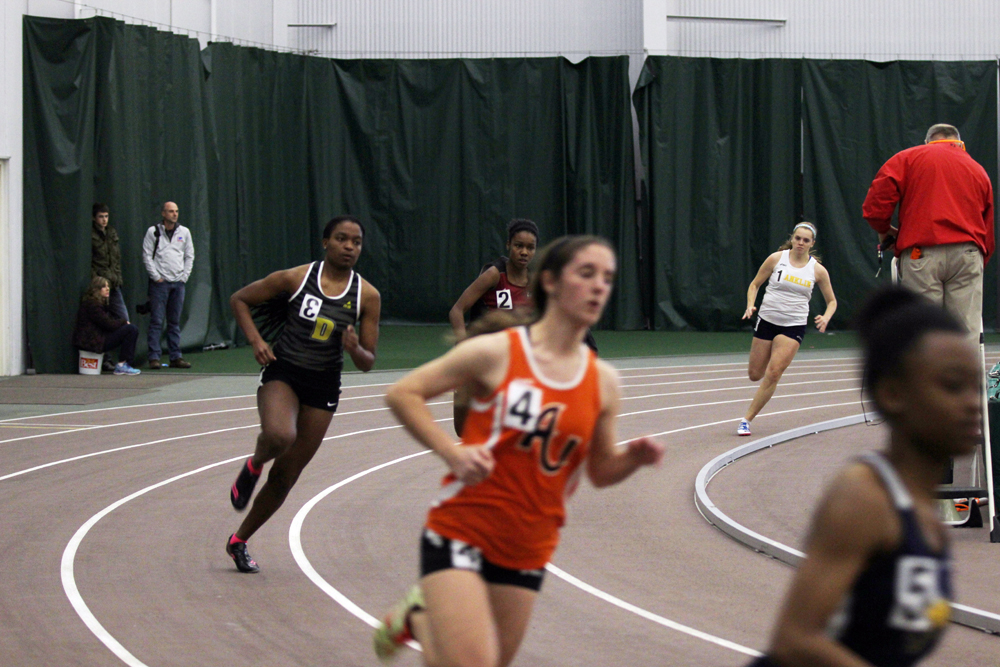 Sophomore Odessa Fernandes rounds a turn
as she runs the 400 meter race.
DePauw hosted the DePauw Invitational on Saturday
in which the women's team took 1st while the men's placed 3rd .
SAM CARAVANA/THE DEPAUW

“It feels really great,” Burke said of winning her event. “I am just hoping to improve as the season goes on. The women's team was extremely excited to win overall, and I think it is just the momentum we need to head into the season with a strong mindset.”

The season has only begun, and while Burke is confident in her team she knows they’re aware of the other challenges they face going forward.

“It feels great to start with two early wins, but we know the competition will get harder, so we need to keep our focus,” Burke said. “The rest of the season will be difficult, but I believe we have the assets and dedication to have strong performances throughout.”

Another member of the team, junior Maggie Royalty, has been impressed with the efforts in the offseason this year.

“With the new Welch Center we are able to lift a lot more which makes us stronger as a team,” Royalty said.

The Welch Fitness Center was recently renovated, making it easier for many athletes to take advantage of new equipment.

“The team has been hitting the gym a lot more this year than the previous years I have been here—we started lifting first semester so I think that has helped a lot,” Royalty said.

The men’s track team placed third out of fifteen at the Invitational on Saturday, behind Rose-Hulman Institute of Technology and Anderson University.

“I think it's a great sign for our team that we're performing well and being competitive this early in the season,” said first-year Kevin Kenney of the first two meets DePauw has had this season. The Tigers placed second in their first invitational of the season.

“Third out of 15 this weekend certainly leaves us excited for the coming weeks,” senior Will Bond said. “The goal of these first few meets is to get our legs under us and find the event where we can each individually be most successful come the conference meet in 3 weeks. To have some team success so early in the season is a bonus.”

The biggest highlight of the meet was junior Marcus Dozier’s first place finish in the shot-put and the fact that he broke his own record that he set last week.

“It's always good to see Marcus Dozier kill it in the shot-put,” senior Noah Gatwood said, “and to break yet another record, that was fun.”

“Marcus is an excellent leader because he brings a team-minded attitude despite his amazing individual accomplishments,” Bond said. “Having a returning All-American on the team is also a strong motivator for some of the rest of us to try and reach that point.”

Other notable performances include freshman record-setting first-year Josh Ebikwo finished who second in the 200 meters (23.14).

“There were a lot of second place finishes across all the events and our freshman class is making some good scoring contributions,” Gatwood, who also finished second in his event, the 5,000 meters (15:32.64) said. “A lot of good things are happening and we are all very excited.”

Both teams host the DePauw Classic next Saturday starting at 11 a.m.