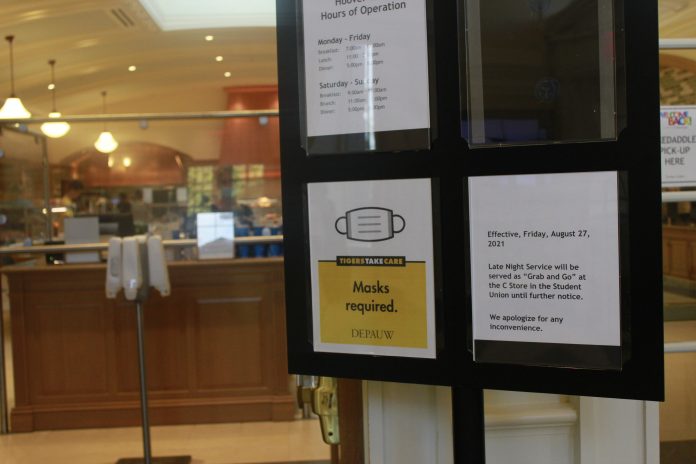 Due to a lack of staffing, Late Night will continue at the C-Store until 11:30 p.m. instead of Hoover this semester.

Blend, the smoothie stand in the Lilly Center, is also on hold until it can be completely staffed by students, according to John Hecko, general manager for Bon Appetit at DePauw.

“My job in the service industry is to always say yes … This is the first time in my life where I have to tell people no,” Hecko said.

The problem is that many of the positions, which were unfilled during the pandemic have remained unfilled since, according to Hecko.

Bon Appetit and the University are not unique in their staffing shortage, however. Restaurants and businesses throughout Greencastle are also facing difficulty with hiring staff. Starbucks, for example, is currently only able to stay open Tuesday-Saturday from 8 a.m. to 1 p.m.

Luckily for DePauw, Bon Appetit’s Farm to Fork program has eased some supply chain issues. Bon Appetit at DePauw sources roughly 45-50% of their meat and produce, including all of their beef, from local farms.

“We've never had an issue with getting those things because of those specific relationships,” Hecko said.

Depauw dining services has also been able to lean on nearby Bon Appetit locations like Rose-Hulman. After a Pepsi factory in Indianapolis collapsed two months ago, beverage orders halted. Hecko was able to continue ordering through Rose-Hulman’s distributor in Terre Haute, but due to low staffing, Hecko has had to drive to pick those orders up himself.

Despite the lack of Late Night and Blend, Hecko has worked to add food options as well, partnering with Umami to offer sushi for lunch at Hoover every Tuesday, and everyday at the C-Store (while supplies last).

Still, some students remain disappointed by the lack of a dine-in Late Night experience.

“[Late Night] was the highlight of my freshman and sophomore year,” senior Natalie Michaels said.

“I understand there are staffing shortages, but especially in Greencastle, there are limited options for what students can eat after 10 p.m.”

Bon Appetit has reimagined some of the menu options in Hoover, working harder to meet the needs of students and create better international food options.

For Hecko, scaling down Late Night is not only a necessary step, it’s a measure of sustainability as well.

For students interested in employment, Hoover and Blend are hiring, as well as most businesses on campus and in the community, according to Travis Linneweber, associate Vice president for finance & administration.