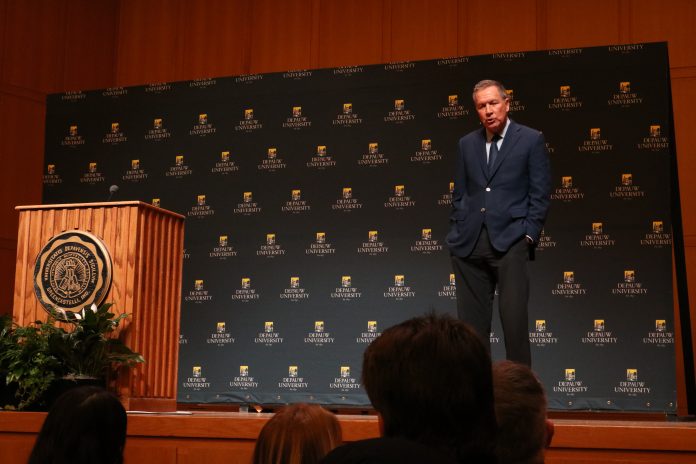 Kasich made clear he did not come to DePauw to only talk about politics, but rather how each individual can influence those around them. “I think we should all work to change the world,” Kasich said, “You’re motivated by the people around you.”

To guide those in the audience on how to influence others, Kasich shared a few individual stories, as well as advice on leadership. “When you try to make change and stand up for something you believe in, you’re going to be criticized,” Kasich said.

He also commended other world famous leaders, such as Nelson Mandela and Martin Luther King Jr., noting how they stood alone in their beliefs and complimenting their work. “It’s not easy to be a leader and you have to be prepared to stand alone,” said Kasich.

Kasich spoke about how today’s political division is unlike anything he has seen before and that we should, “get out of our silos,” regarding polarized political parties. “Don’t just read things you agree with. You ask how we can get rid of the division in our country and it starts with you and me.”

Ken Owen, special advisor to the president, opened the the question and answer portion with, “I want to address the elephant in the room,” Owen said, “What are your plans for 2020?”

Kasich responded that he would not rule out a run but also said he would not run just to hurt another candidate. Despite his loss in 2016, Kasich claimed to have loved every minute of his campaign adding that it was a fulfilling experience.

Mistakes often come with running a political campaign. Kasich spoke about how he deals with mistakes, mentioning he fails all the time. “I’ve made terrible mistakes. I get up the next day and ask how I can help the world,” Kasich said.

Continuing the theme of individual impact, Kasich asked the audience if knowing life ends makes us want to live a bigger life or a smaller one. “When you live a life bigger than yourself, that’s when we forget about the fighting as a country,” Kasich said, “Divided we do not stand, united we do.”