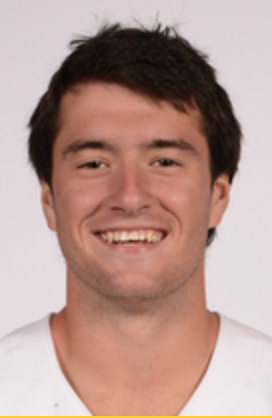 Sophomore Andy Hunt is an integral part of the this year’s Tigers offense. He is also senior quarterback Matt Hunt’s younger brother. Gathering 689 yards and ten touchdowns this season as an underclassmen, Andy Hunt was an asset to the Tigers high-powered offense. The crowning moment of his season was sealing the Monon Bell victory and catching the game winning touchdown from his brother on a fade to the right side of the endzone.

TDP: How did you feel going into the weekend?

Hunt: Going into the game we felt the most confident we felt in awhile. We knew we needed to not turn the ball over if we wanted to win, and we didn’t turn it over once. So we felt prepared.

TDP: How important was the senior class to your success?

Hunt: The seniors have celebrated a lot and they deserve to. They earned it after all the years of tough losses. For the younger guys, we’re focused on taking this momentum into next season. These seniors are really hard working. They came in 2-8. We came into a team that was pretty good. They took a leap of faith to come here and play, and we all really respected that.

TDP: What does it mean for you to bring back the bell?

Hunt: The two years when Matt was here and I was still in high school, I went to both Monon Bell games and I got the feel for it. Talking to him and his friends and seeing what it meant to them. Especially when they give their senior speeches, it hits you and your like “wow, what would it feel like to come so far.” Last year too, we had a devastating loss to Wabash so it was nice getting them back after so long.

Hunt: It’s a long week. Every day people ask you, “are you going to bring it back?” Extra pressure from around the school, but never from the team. Coach Lynch did a great job of keeping us focused. He harped on the fact that the game was about us, not about anything else. Definitely the buzz around campus can get to your head. When gametime hit, we were ready to go.

TDP: What was it like before the the final drive?

Hunt: When we were in the offensive huddle, we were staying positive. We do two-minute drills once a week, so we were just staying positive the whole time. The coaches had faith in us and never had a pessimistic attitude. Some guys really stepped up in the game. Ian played really well and opened it up for a lot of us. The seniors stepped up during the game and helped keep our heads level.

TDP: What was going through your head after you caught the game-winning touchdown?

Hunt: That’s a route we run a lot in the summer with some guys, and we run it a lot at practice. I knew that if I could get open and Matt would see me and be able to get the ball there. That final play was awesome between Matt and I, but to see him and his friends and the excitement on their faces, it was the best thing I could’ve asked for. For all the younger guys, that will really motivate us in the off season.