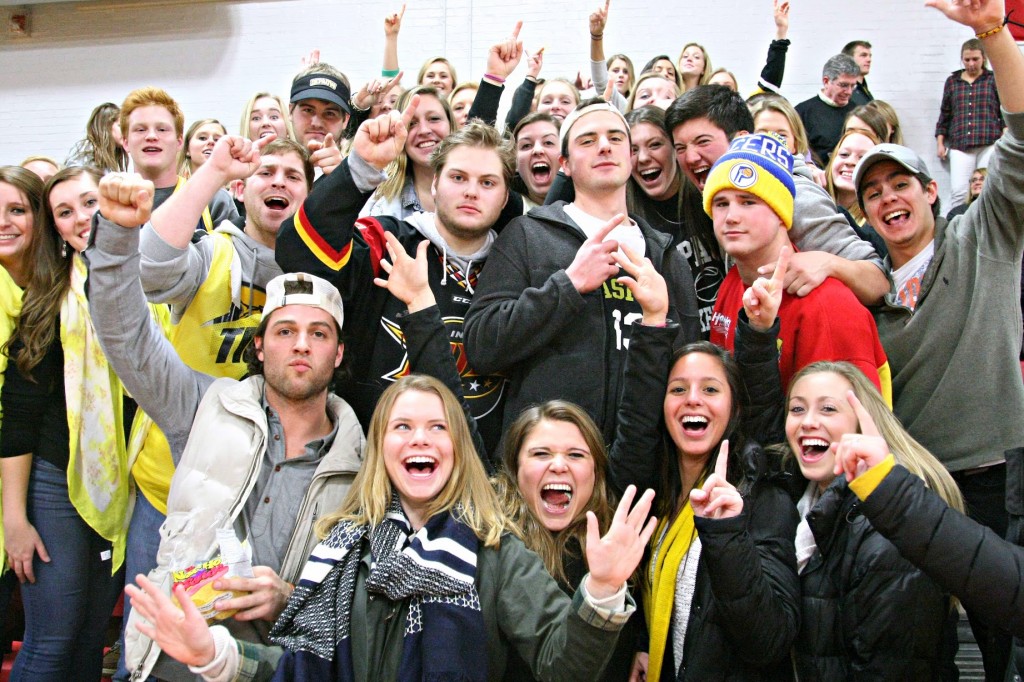 As someone who’s sat through games where DePauw couldn’t even fill a quarter of the stands, the athletic director has seen enough.

“There’s a point where you say, ‘you know what, they do that really well’,” said Baker-Watson, who came to DePauw in 2012. “When DePauw has played Wabash, their students have done a great job bringing school spirit to the game.”

And despite the rivalry, DePauw really does have to hand it to them.

When they aren’t ringing the Monon Bell 24/7, Wabash freshmen are learning and memorizing “Old Wabash”, the school’s song, for their homecoming week. On Fridays, one can find most of the school’s administration wearing red. And of course, there’s The Sphinx Club, the Little Giant’s cheer organization that makes itself heard loud and clear during football games.

“If anything, more people abide by the traditions now than during my day,” said Wabash Athletic Director Joseph Haklin, who graduated from the college in 1973. “School spirit is more intense now than it was back then.”

It seems as if DePauw has undergone a completely opposite transformation. While any sporting event against Wabash is likely to draw a respectable crowd, DePauw’s games, matches and meets against other teams don’t seem to matter.

But it’s not as if DePauw can’t get to the level of Wabash. During these past weeks, student government has been taking a step in the right direction.

In preparation for the football team’s home opener this Saturday against Wooster, the organization, with the help of Baker-Watson, have implemented an official student section, which will be marked by gold tape.

“[Attendance] has been pretty stagnant for games that aren’t Monon,” said senior Anna Gawlik, Vice President of Student Life. “Obviously people go to the games, they’ll go to Wabash, they’ll come here. But the amount of people that go and watch the game is not anything to be proud of.”

After seeing student sections come and go at Blackstock Stadium, Baker-Watson is hoping this will be the year where the fans take full advantage of the special space allotted to them.

“We never really took it away, but a student section is only valuable if there’s participation and people actually in there,” said Baker-Watson. “Just because I put up a sign that says ‘students sit here’ doesn’t mean the students are going to get there. So let’s have the students sit in that space.”

Student government will also be doing raffles this weekend, Old Gold Weekend and Monon, with prizes including an iPad Mini and Apple Watch. But while Monon will be an easy draw, Gawlik is especially hoping to see a big turnout for Old Gold.

“We’re trying to get Old Gold to be an actual homecoming game, instead of people not knowing what’s going on,” said Gawlik, who plans on having a block party and concert that night after the Tigers game against Wittenberg. “I think it’s going to help students to get school spirit by seeing people, who were once here, still have it.”

DePauw can increase school spirit. But will it? That’s a question only students can answer.

With student government having provided the school with the necessary resources to make a change, this Saturday will be a test run in hopes of restoring Tiger pride.