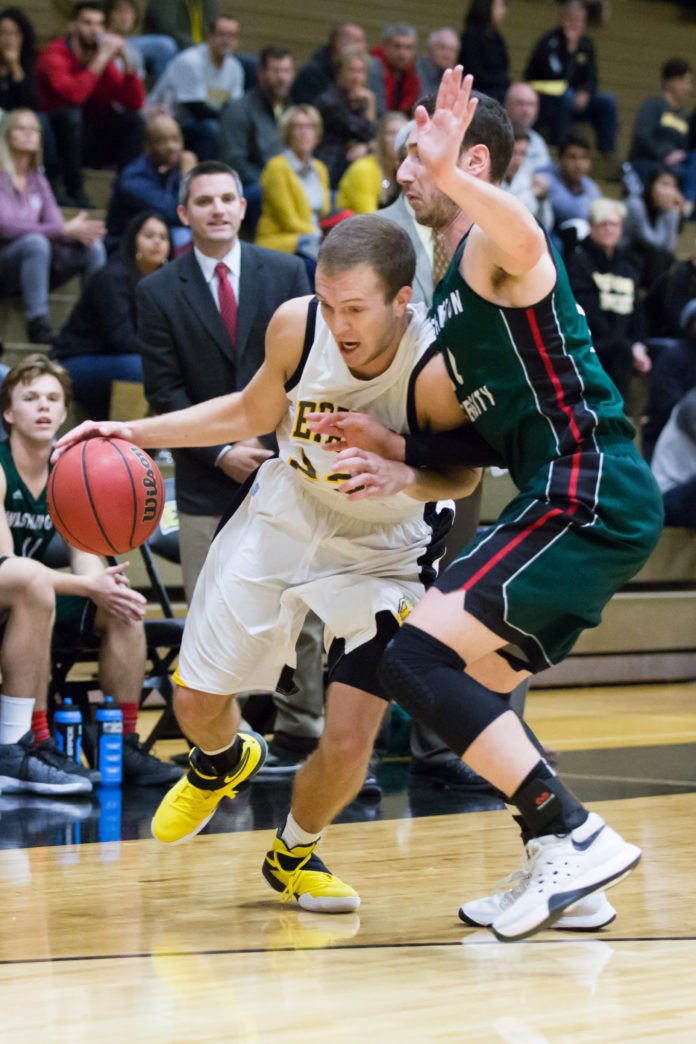 Through the first five games of the season, the DePauw University’s men’s basketball team has seen ups and downs ending with a 2-3 record.

The DePauw Tigers battled 20th-ranked Washington University in St. Louis until the end, but couldn't pull off the upset in an 84-77 loss on Saturday. Despite the loss, senior Luke Lattner became the 26th player in DePauw History to score 1,000 points. Lattner finished the game with 22 points despite fouling out.

“It was a surreal moment,” said Lattner. “Honestly, I didn't even know that was the case until an hour or so after the game, but it was fun. Would have loved to win the game, but we are gonna keep working to be at our best as the season goes along.”

Washington out rebounded the Tigers 37-28 and outscored DePauw 38-30 in the paint. Following the defeat Washington improved to 2-0, while the Tigers dropped to 0-2.

The Tigers continued their season over Thanksgiving break in a tournament hosted by the University of Chicago. They began the tournament with a win over East-West University with a final score of 86-77 for their second straight win and to pull even at 2-2 on the season.

Lattner led all-scorers with 26 points and 6-10 shooting from the field. Junior Jack VandeMerkt was a jack-of-all-trades and had his second consecutive double-double with 12 points and 10 rebounds.

The Tigers shot nearly 20 percent better from the field than East-West and outrebounded them 51-33.

The following day, second half troubles left the Tigers disappointed as they fell to Chicago 56-71. With the loss, the Tigers fell below .500 on the season to a record of 2-3.

“We felt that we had a chance to win the game Sunday against Chicago,” said senior point guard, Nate Jahn. “We were up at half, but just ran out of steam late.”

DePauw held a 35-34 advantage at halftime before Chicago outscored DePauw 44-21 in the second half. DePauw was held scoreless for six minutes where they saw an eight-point deficit turn into a 57-42 hole with 9:48 remaining.

“In the second half we went through a drought on the offensive end and went through a stretch of time where we had trouble scoring,” said junior guard, James Clarke.

Lattner led with 18 points and was the only Tiger to reach double digits. Jahn scored nine points after shooting a perfect 3-for-3 from beyond the arc. Junior Mason Hankins scored seven off the bench.

“We will get better as the season goes on and our timing and chemistry will improve,” Lattner said. “We keep saying it's not about how we are playing now but how we are playing in February so we just have to stay patient and keep trusting our stuff, each other and the whole process.”

The Tigers are back in action Saturday, Dec. 3 against Ohio Wesleyan who is ranked No. 2 in the Great Lakes region.