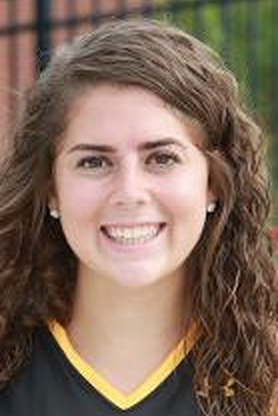 After earning a hat trick in the Tigers 5-2 victory last Saturday, sophomore forward Paige Berliner chipped in another goal along with two assists in DePauw’s 10-1 blowout win over Earlham on Wednesday night. This week, The DePauw had the opportunity to sit down with Berliner to discuss her personal improvements as a sophomore and where the team stands more than halfway through the season.

The DePauw (TDP): Looking at your stats, you’re two goals away from your freshman year total, as well as already having surpassed your total assists. Do you see more of your improvement from your stats or how you’re playing overall?

Paige Berliner (PB): I think both…. We have a really different team this year, so how I’m playing this year is a lot different than last year. We had a lot of very good players last year who kind of controlled the ball, and this year, it’s a lot more of a team effort I think. So that definitely helps with growing assists… But I don’t focus on it too much, I kind of just go game by game.

TDP: Building off of that, how have you felt that you’ve personally made to get better in comparison to last season?

PB: I definitely worked a lot harder offseason this year than I did in the past. I knew what more to focus on…coming from last year. And also, just being an upperclassmen on the team, you need to step up. I think that’s kind of pushed me a little bit harder this year.

TDP: What have you seen differently your second time around as a sophomore in the game?

PB: It’s less stressful this year than it was last year. I wasn’t used to playing at the speed of college field hockey last year. It’s been an easier transition.

TDP: What’s it been like playing under two different coaches in your two years at the collegiate level?

PB: It’s been really different, but I didn’t get the chance to know our freshmen coach (Gina Wills) that well, so it wasn’t too big of a change. I think it was a lot bigger of a change for some of the upperclassmen. But so far, it’s been really good. I’ve liked playing for two coaches. I’ve learned two different coaching styles, which has been nice.

TDP: While most of the team’s games have been Conference, you’re still 6-1 against these teams. What does that mean for the team? Is there a different feeling heading into a conference game vs. a non-conference game?

PB: There’s definitely more pressure on us for conference games because we want to be in the NCAC tournament. We play every conference team twice, which is really different from other sports… If we make a mistake in one game, like, we lost against Kenyon, we know what to fix coming back, which I think is important too.

TDP: What goals/improvements is the team looking at for the remainder of the season?

PB: We’ve played every conference team once now, so I think we’re trying to just improve on little mistakes we’ve made in the last game, hopefully beating Kenyon the next time we see them around… Right now…we’re just thinking about what we could do best for the NCAC Conference Tournament.