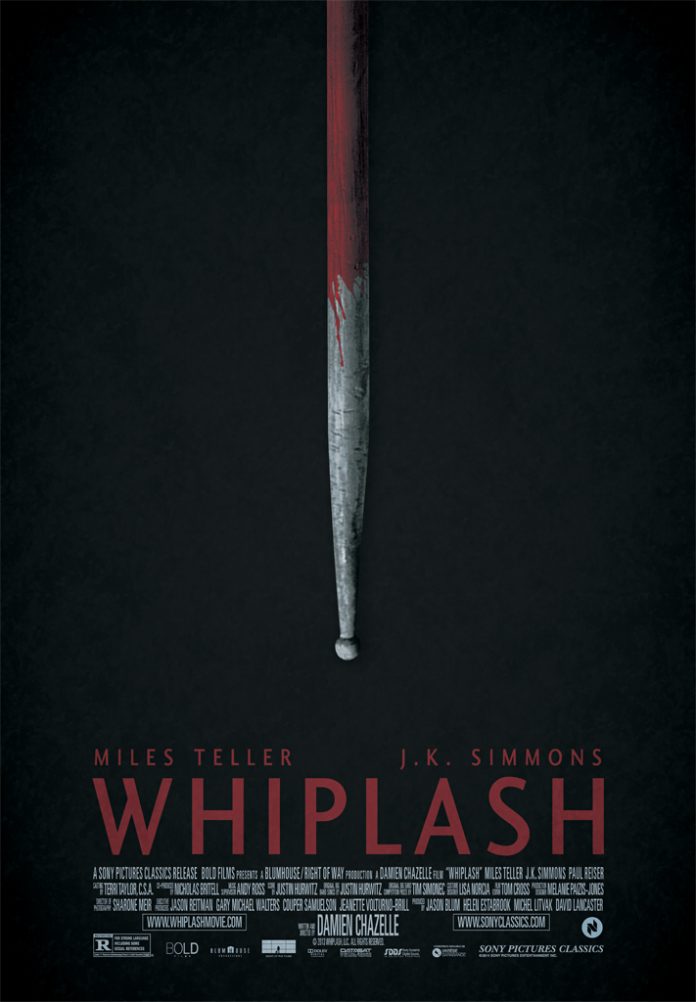 Music is indispensable for films, an essential tool to immerse the audience in every scene. Damien Chazelle’s “Whiplash” is such an example. Winning three Academy Awards, “Whiplash” sets a gold standard for how good music can be when combined with sensational acting.

“Whiplash” is a story about Andrew Neiman, a first-year jazz drummer at the fictitious Shaffer Conservatory, a prestigious music school in New York. Having played drumset from a young age, Neiman aspires to become a great jazz drummer like his idol, Buddy Rich. Terrence Fletcher, the infamous director for Shaffer’s top bandr, invites Neiman to join his studio. But Neiman quickly realizes the dark side of Fletcher’s studio, facing physical and verbal abuse.. Their relationship becomes more complicated throughout the film as they work together.

“Whiplash” is more of a thriller than a musical. Audiences feel the rising intensity in the band’s practices. All the members in the band are sweaty, strained and anxious. Music has become their language, and they are obsessed with trying to push beyond their skills. Fletcher’s offensive insults and authoritarian leadership keep the group on their toes, and anyone who cannot take the stress is left behind. . Fletcher’s harsh method turns the rehearsals into a race for survival, where every chipped note means horrible punishment for the students.

While it may be extreme and dramatic, “Whiplash” pinpoints the two characters’ love for music. Neiman pursues perfection at the expense of blood and tears. Fletcher discards his morality to push his students towards excellence. Neiman’s obsession for greatness leads him to ignore his hatred for Fletcher, but his obsession comes at a cost.. Fletcher is heavily fixated with the idea of training the second Charlie Parker, the legendary jazz composer. When asked about his brutal teaching, Fletcher shows his conviction: “The real Charlie Parker will never be discouraged.”

Along with the intense plot, the music in “Whiplash” makes it special. Chazelle was intentional in choosing Neiman as a drummer. Every beat elevates the tension built up through the band’s rehearsals.. Neiman’s 15-minute solo performance on stage under Fletcher’s conduction is arguably one of the best scenes in the film history.

Paired with extraordinary music is exceptional acting. Miles Teller as Neiman captures the blind obsession of a young musician chasing greatness.. But J.K Simmons as Fletcher really steals the show. Bald, muscular, and always angry, Simmons’s performance is terrifying and cruel. His actions exceed all definitions of rudeness: throwing chairs at people, slapping his students, ignoring others’ emotions.

The film’s controversial yet powerful content provokes questions about work ethic and greatness. Neiman and Fletcher are no protagonists, as the two make many indecent, if not inhuman, decisions throughout the film. However bad they can be as human beings, their incredibly strong will is undeniable. Whether it is determination and diligence, or merely blind obsession, their dedication is what sets them apart from others. Perhaps that is the message Chazelle wants to tell his audiences: If you want to be great, you have to be different, no matter the cost.