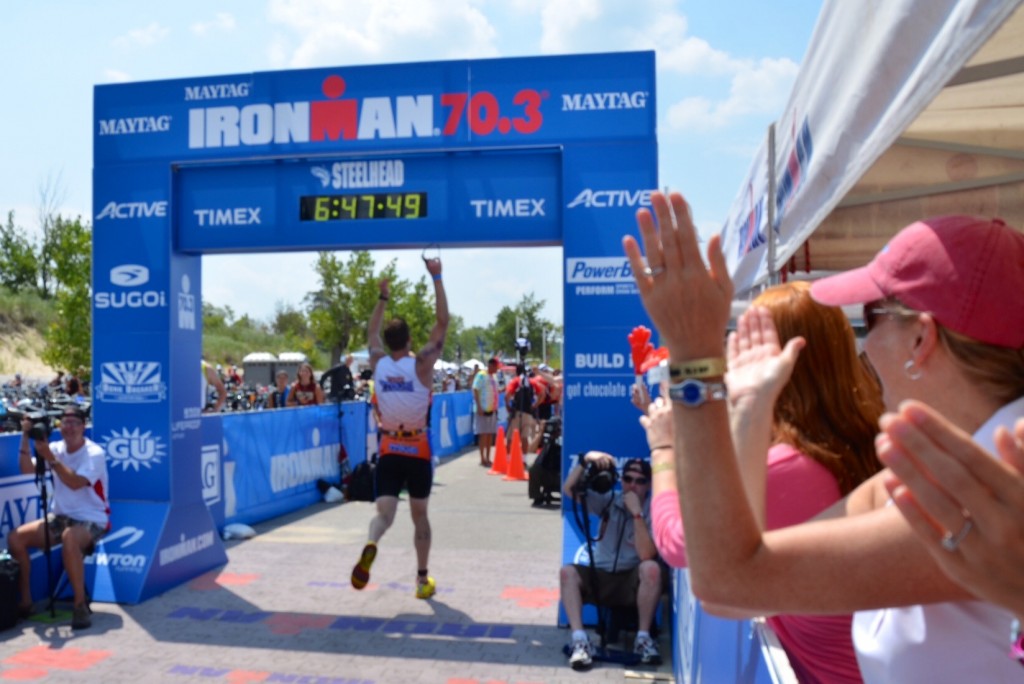 Chase Hall crosses the finish line in the half Ironman in Michigam.
PHOTO COURTESY OF CHASE HALL

With the opening of the new Welch Fitness Center, many opportunities have now been unlocked for athletes and even for those just trying to get in shape.

Many students have already started to take advantage of them, but the balcony of treadmills holds the potential for DePauw students to find new athletic abilities yet to be harnessed.

A select handful of faculty and alumni have been in on this secret for years now and have accomplished incredible feats because of it.

The Ironman triathlon is an event for the superlatively fit and brave souls ready for an adrenaline rush like no other. Consisting of a 2.4-mile swim, an astounding 112-mile bike ride and a grueling 26.2-mile run, the Ironman is not a triathlon for the weak.

Jonathan Coffin, Chief of Communications and Strategic Initiatives, completed an impressive three half Ironman Triathlons as well as two full ones.

“Ironmans are my way of focusing on fitness, eating right and trying to be healthy,” Coffin said.

Chase Hall ’13 completed his first half Ironman in Michigan three weekends ago after competing in a slew of other races since his time here in Greencastle. Hall also competed in the Little 500 race here on campus.

The Ironman, as well as other races, take months or even years to train for. “I suppose I’ve really been training for the last five years,” Hall said. “It takes a lot of time, but the exercise is always rewarding and a good habit to have.”

“The person who really got me started was Emily Watts,” Coffin said. Watts ‘11 worked in admissions and did her first Ironman in Whales. “A year after she graduated, she qualified for the Kona Ironman in Hawaii,” Coffin said. “She pushed me to do one in Muncie. We trained together all the time.”

Although Greencastle probably won’t be hosting the Olympics anytime soon, it is surprisingly an ideal location to train for the Ironman.

“Weirdly Greencastle is a really nice place for training,” Coffin said. “There are great roads for biking, good terrain for running including the Nature Park and access to a pool.”

Hall’s training includes three six-to-seven-mile runs, at least a six-mile bike ride and a mile-long swim three to four times per week. Weekends work better for Coffin, as well as the summers when Greencastle slows down.

There is an up side to all of this training however. Athletes of this caliber get to stuff their faces with as much food as they can fit in their stomachs in order to maintain the nutrients their body burns off from all of the training.

“One of my favorite perks is getting to eat double the amount of food as any normal person would typically eat,” Hall said. His diet on any given day consists of a protein shake, breakfast, a salad for first lunch, a second lunch, then two dinners after work. 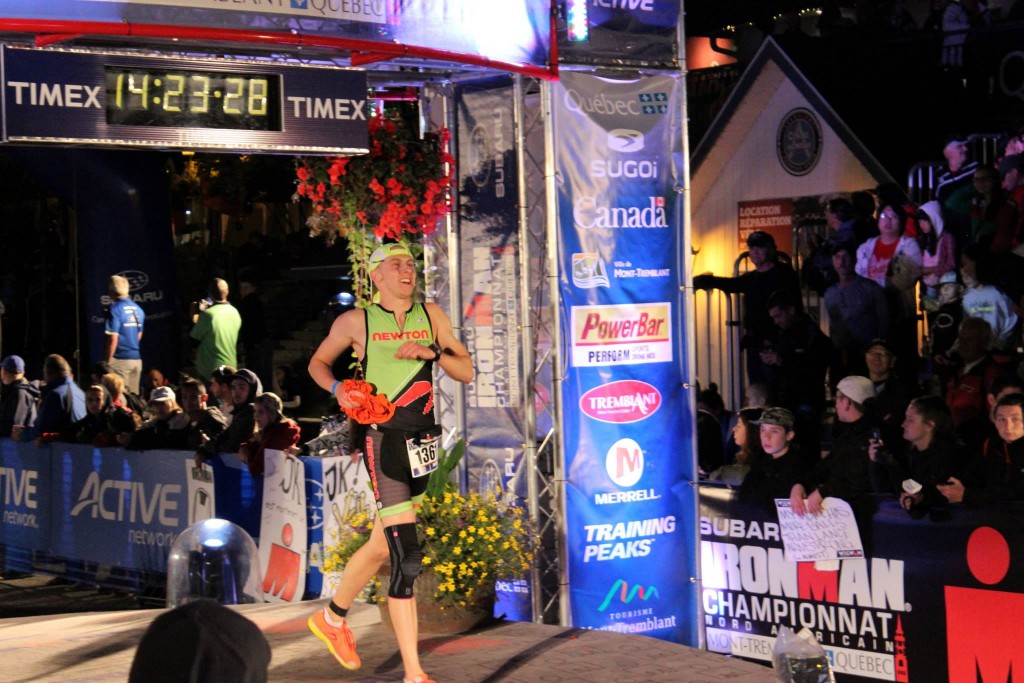 “You have to fuel well if you want to exercise that much,” Hall said. For snacks, he eats fish, a variety of nuts, his favorite being almonds, and kale. “I eat a lot of kale,” said Hall.

Many competitors have special foods they eat during the race as well. “I like to eat Fig Newtons and Chex Mix on the bike,” Coffin said. “My secret food while on the race was Sour Patch Watermelons. I would eat one as a sort of treat at certain mile-markers.”

Another that many people find odd is Coca-Cola, according to Coffin.  “Flat Coke is commonplace for Ironman athletes to start drinking in small sips from maybe mile station 18 on,” Coffin said. “It is great short term energy but you must keep drinking it at certain intervals or you crash. It totally got me through the last six miles of the race.”

The training is one thing, but the actual event is one of, if not the most strenuous events out there today. “Nothing you train for can truly prepare you [for the actual event],” Hall Said. “The run is absolutely the hardest part.”

Competitors complete all three events consecutively, so when it comes time to complete the third leg, many fall behind. “Getting off of that bike and knowing I still had 12 miles to run was exhausting, definitely the hardest three hours of my athletic career,” Hall said. “At that point, I was basically just living on the adrenaline.”

“Bricks are the most important form of training for me,” Coffin said. Bricks are when one bikes and then immediately follows it with a run. “Since [running] is a different movement than biking, and your legs are tight and beat, then all of a sudden, you are making them run, it can be extremely difficult.”

While competing in a competition like this seems crazy and the training nearly impossible to maintain with school or work, Hall finds the end result immensely rewarding.

“I often get asked the question, ‘What can be enjoyable about a race like this?’” Hall said. “It is definitely the atmosphere. Everyone [in the race] is really encouraging and will give you thumbs up if they see you walking or start to pass you. Meeting my new competitors is something I look forward to, the atmosphere makes it enjoyable, and you smile a lot more than you might think.”

Coffin has similar reasons for his competing.

“There is nothing more amazing than seeing that last person cross the finish line right before the midnight cut off,” Coffin said. “Seeing their face when the announcer says, ‘You are an Ironman.’ That’s a pretty cool feeling.”

Hall has plans to continue his athletic endeavors in the future as well. “I competed in a half-marathon in June and will be competing in a full one this December,” said Hall. “I’m 23 now, and my goal is to complete a full Ironman Triathlon by the time I am 25.  I would love to do it somewhere cool, too, like somewhere out west maybe.”

“Crossing the finish line is awesome so that helps a lot,” Coffin said, “and so does looking around you at all the people cheering you on. Usually, the setting is quite beautiful as well.  I told myself, ‘Well, at least when I’m in pain and everything hurts, at least I can look around and see everything is really, really beautiful.”

Hundreds of Ironman competitions are held all across the United States, as well as in other countries, and many take place in scenic areas. The 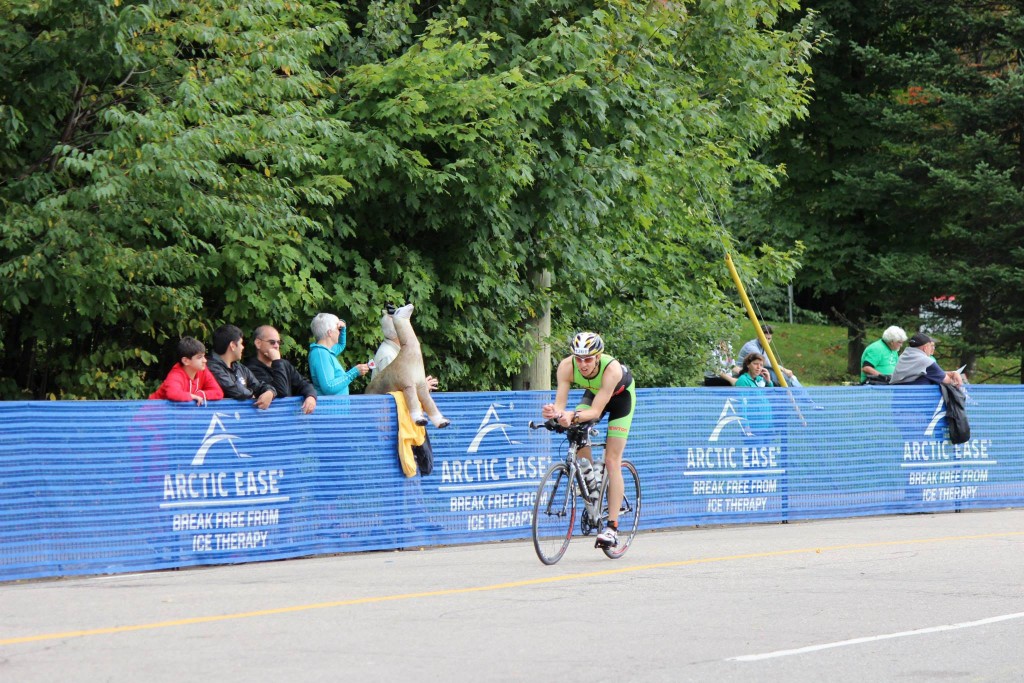 Jonathan Coffin rides in the bike portion of the Mont-Tremblant Ironman.
PHOTO COUTESY OF JONATHAN COFFIN

competition in Kona, Hawaii, is ranked one of the top Ironman spots around by avid triathletes.

“I would argue that Mont-Tresblant rivals Kona in terms of beauty,” Coffin said, “but mountains are more my thing.”  Coffin’s first Ironman was in Boulder, Colorado.

If there were any eager students on campus looking to use Welch to its maximum capacity, there are plenty of races close by, the closest and most charming being held in Muncie, Indiana, in July.

“Anyone can do it,” Coffin said. “People always think it is a big deal, and it certainly isn’t a small deal, but anyone who puts their mind to it can do it. I’m always floored when I get passed on the bike by a 70-year-old who is just knocking it out of the park. If that’s not evidence for you then I don’t know what

In fact, Coffin didn’t do any sports in college. “I actually used to think running for fun was stupid,” Coffin said.

That sure isn’t the case now.

“It’s the most miserable amount of fun you will ever have,” said Hall.