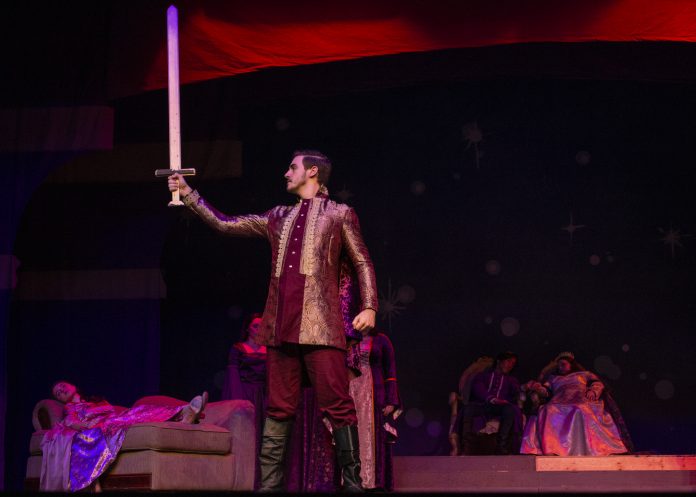 The sound of instruments filled Moore theatre as the orchestra warmed up in the pit. The crew scurried around the stage sweeping every last particle of dust and correcting every wrinkle in the set. All this in preparation to bring two fairytales to life in Moore Theater.

Thomas said she’s not in the school of music but enjoys acting. As Maleficent, she had the opportunity to play a villainous role.

Thomas said she hopes the audience will tap into their curiosity.

“I hope that they will be inspired to tap into their curiosity because I feel like that’s a common theme between the both of the operas,” Thomas said.

Also, senior Anna Roth plays two characters in Sleeping Beauty. She plays the old woman in the tower (La Vecchietta) and La Duchesse (The duchess). She plans to pursue vocal performance after DePauw.

“It really is amazing that I get the opportunity to participate in shows like this here like that. There are full scale opera productions that us as undergraduate students can participate in because it gives us so much more preparation for the real world,” Roth said.

Students have prepared for this performance since mid-January and performances are scheduled for 7:30 p.m. from Thursday to Sunday and 2 p.m. on Sunday.

Roth said she hopes that audiences will have a great time with classical and operatic music.

“They’re both really active and really colorful shows. I hope that it brings the audience joy  and some nostalgia. And at the same time, I hope that they’re accessible enough that audiences can have a fun time with classical music and with operatic music when that’s not something that people usually listen to,” Roth said.