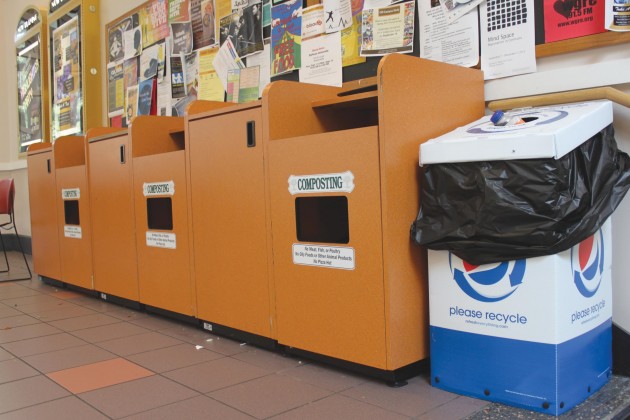 What’s in your trashcan? For most people, trash talk is a rather unusual conversation starter. We dispose of our trash and continue on with the day. But for the university facilities staff, waste management is a constant discussion topic. The staff, which works at all hours of the night, works to clean the campus before most students even eat breakfast.
On average, DePauw produces approximately 100,000 pounds of paper and 50,000 pounds of compost each year. These estimates are compiled from the staff’s monthly reports, according to Facilities Director Tony Robertson.
Randy Young, a facilities staff member, begins his shift in the GCPA at 6 a.m., collecting trash and recyclables from various offices in the Music Library. He then moves to the lower level of the music wing closest to College Street, commonly referred to as “Bum Alley” by students. Since the area is a common evening study space for students, coffee cups and sandwich wrappers are often left behind.
The morning shift is also responsible for collecting the waste from CafÃ© Allegro in the Great Hall, the Music Library and the copiers. They often end their shift by gathering the trash and recycling from the trash bins located around the perimeter of the GCPA.
All residence halls have trash collection between 7 a.m. and 4 p.m. with one housekeeper being in charge of two floors. Their shift begins by cleaning the common area, lobby, stairways, television room and laundry room. After a 30-minute break, the housekeepers then clean their assisgned floors and head to the recycling rooms.
As part of the university’s efforts to be greener, the trash and recycling bins have been placed in separate locations on every floor in hopes to eliminate the confusion over the recyclable nature of certain products. The trash cans are located in the bathrooms and kitchen while the recycling bins are located in the middle closet on the floor. Despite this effort, facilities staff member Candy Price said that some floors are better at recycling than others.
More popular buildings, such as the GCPA, Julian and all of Academic Quad, have trash collected multiple times a day. Workers from all three shifts are in charge of maintaining their cleanliness around the clock.
Ron Howard, head of the Greencastle division of Republic Services, provided insight on the detailed process on waste management in a phone interview.
“The trash is picked up from the campus every day depending on the volume,” Howard said. “Once it is collected, the waste and recyclable material are shipped to various locations across Indiana.”
The waste is dropped off at the Greencastle Transfer Station, located near the city limits. It is then placed inside an industrial-sized trailer. Once the trailer is filled completely, it is then transported to the Sycamore Ridge Landfill in Terre Haute.
The recyclable material is transported to sorting facility in Indianapolis on 96th street and segregated into different bins. This location accepts all recyclable material, including all plastics 1-7 and aluminum 1-10. Once the sorting is completed, the material is sold to vendors all over the country. Paper is distributed to mills across the state. Aluminum is sold to big brand vendors, such as Pepsi and Bush, to remake aluminum cans that can be used to distribute their products back into the market.
Students have commented on the overall cleanliness of the academic buildings on campus, especially during the week. Those taking morning classes rarely complain about a disorderly classroom. Junior Courtney Bowers has classes throughout the day in several academic buildings and rarely notices a change in cleanliness.
DePauw still has room to improve. High traffic areas, such as Roy, the GCPA and the dining halls have proven to be the most difficult areas on campus to keep clean. With people always on the go, spills and crumbs are inevitable, making the space appear unkept.
“If people throw away recyclable material in the trash, it is considered contaminated and cannot be removed and recycled,” said Sheri Comer, a facilities staff member.
Littering has also been a common complaint among students. Freshman Norah Gorman recounts that some mornings, entire meals and other random trash are tossed carelessly on the sidewalks.
“It makes me mad because I hate littering,” Gorman said.
The absence of the facilities staff on the weekend has also affected the campus’ overall appearance.
“After a weekend, there is trash everywhere. I can find red solo cups and beer cans all over the place on a Sunday morning,” Bowers said.
DePauw has already begun a movement towards more effective sustainability, such as the ban on plastic bottles sold in the dining halls and the monitoring of sprinklers on campus. With a campus wide effort, the university can transform itself into a greener environment.