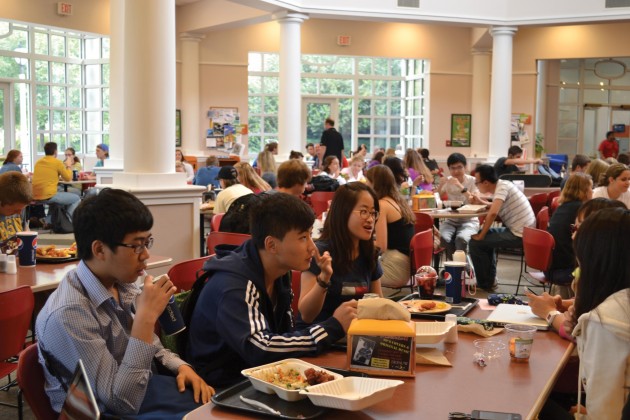 Walking through the Hub at lunch paints a picture of separation. Students rush to sit with floormates, members of their greek houses or teammates. It's the same with international students, who often tend to sit with each another.
"That's not an indication things are bad - they just want to relax with people [they] identify with," Loutfi Jirari, the director of International Student Services said.
A national survey given by the National Survey of Student Engagement to college freshman and seniors ranks DePauw higher in having deep conversations between international and domestic students than schools similar to DePauw and larger institutions across the country.
The survey asked students how often they have had a conversation with a person who is a different race, from a different country or has a different ethnic background. Thirty-nine percent of DePauw freshman said they often had these conversations - higher than the national average of 26 percent. Similarly, 33 percent of DePauw seniors reported to have had these same conversations, which is also higher than the national average of 26 percent.
DePauw's numbers have risen since 2006.
And so has DePauw's international and minority population, which grew to 30 percent this year, Jirari said.
"We do it better than most," said Dorian Shager, the dean of Campus Life. However, Shager does think that we can get better at diversifying DePauw.
Differences in culture and, at times, a language barrier separate domestic and international students.
"I think living in the middle of Greencastle is completely different than where [international students] are from," sophomore Kevin Tolley said. "And it's difficult to adjust to a whole new set of social standards."
Jirari believes that international students shouldn't be the only ones trying to fit into a different culture.
"We talk a lot of stuff about the American perspective. It should be everybody," Jirari said. "The students need to make an effort to reach out to minority and international students."
Heavy influence of greek life at DePauw is another reason why international students and domestic students appear separate from each other. Living in a greek house, at times, separates the members from the rest of campus, not just from international students.
"My close friends don't go [to the fraternities] so I don't go. I don't feel comfortable going by myself," said Shuyang Yu, a junior from Shenzhen, China, who goes by Cherry. "It's not like the U.S. students intentionally separate us."
Yu thinks that some of the older, junior and senior, international students appeal less to the fraternity goers than some of the younger students do.
"I don't think it's black and white, that there is no interaction," Jirari said. "I wouldn't say there's nothing, and I wouldn't say it's perfect."
DePauw does offer services to help ease the transition for international students. Additional classes in English are provided as well as information about health insurance and transportation. A pilot group, Global Leaders, promoting diversity began last year. Five students from each grade meet every other week to talk about international issues.
"We have good intentions," Jirari said. "And having good intentions is the first step."