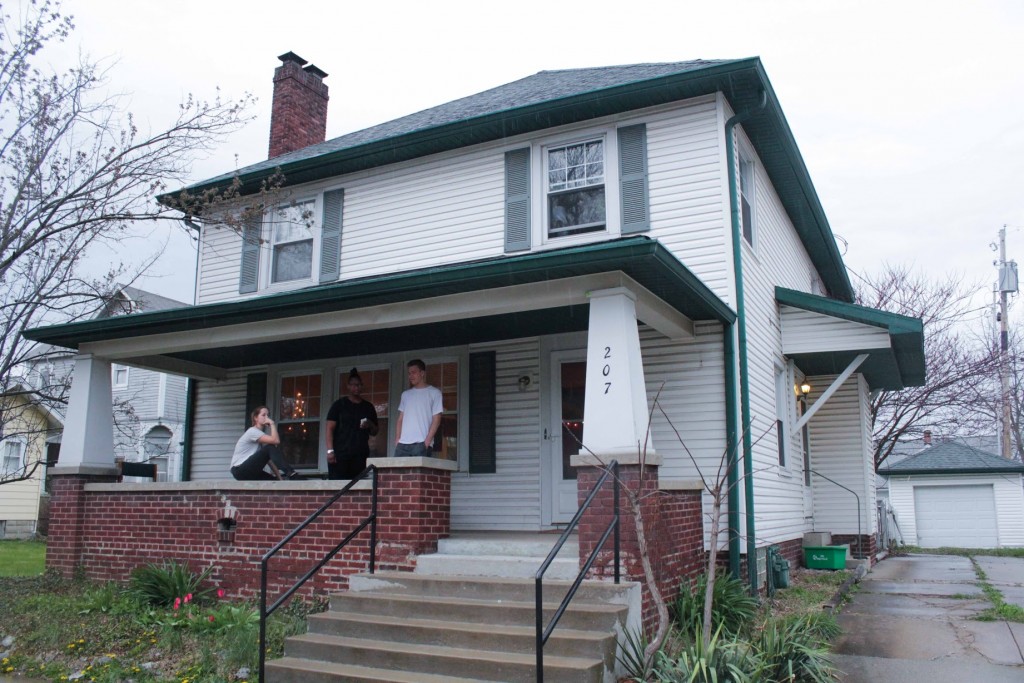 Residents of 207 E Poplar reached out to Public Safety after their rainbow flag was ripped down during spring break. ZACHARY TAYLOR / THE DEPAUW

Early into the spring semester, the residents of 207 E. Poplar Street hung a rainbow flag on their porch.

They called themselves the Halfway House, as three of the six residents are gay.

The flag lasted a little over month; it was ripped down over spring break.

Senior Brandon Peters was the only resident on campus at the time. He was working at Printing Services for the week. After work on Monday, Peters returned home and noticed something odd.

“I came back and there was a cup of liquid that hasn’t been here before that was splattered all over the floor,” Peters said. “I’m assuming someone just chucked it out our house during the day. …Someone was aggressively pounding on that door for about five seconds.”

Peters went to his room and called Public Safety. He said the dispatcher suggested that he take the flag down for his safety. He stayed with a friend who was also on campus.

Peters returned to his house the next day and noticed the flag was gone.

“It was ripped," he said. "Some of the rings were still hanging, so it was clearly just yanked off.”

He wasn’t sure when exactly the flag was torn down. Peters said that Public Safety called him that Friday and apologized for not doing enough that night.

Unfortunately, this wasn’t the first incident at the Halfway House.

A week before spring break, Viti heard a man screaming hate speech for several minutes outside their house around two in the morning. Their doors were unlocked.

Sophomore Diamond McDonald, also a resident, explained an event that took place in February around 10 a.m. She was sitting on the porch when she heard voices say, “Hey, black person.” McDonald realized these were children talking to her. She said they continued to antagonize her, even saying “That’s why your mother’s black.”

After reporting what happened during spring break, the residents received many responses from Public Safety and other campus officials.

“It was definitely an outpour of administration caring,” added Viti.

“They want to emphasize that our safety is their main priority,” McDonald said. “When they were here, they were like, do you need anything fixed up? They’re getting locks for the window. They’re going to replace the lights and make sure all the locks in the doors are working. I feel like they are really focused on us being safe.”

“It’s frustrating because we live right by Marvin’s and the public library,” said resident and senior Olivia Traynor, “so there’s a lot of traffic from the Greencastle community.”

“The majority of the traffic around this area is Greencastle residents,” said Peters. “We don’t really interact with the student body.”

But there is only so much Public Safety can do, since no cameras caught the perpetrators in the act and determing the culprit is likely to be very difficult.

“It’s really hard to say who did it,” Traynor said. “It’s kind of scary because if it was the community, how do we handle that? I don’t think it’s a student.”

Director of Public Safety Angela Nally said in an email that they were willing to face a camera on the flag if the residents continue to be antagonized, and that they have initiated extra patrols around their house.

“I think we’re definitely going to hang a flag,” said Viti, “maybe two of them.”