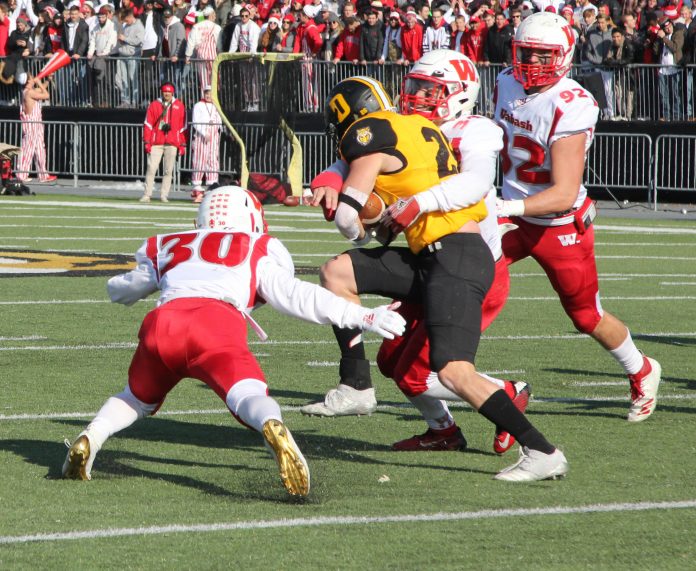 On Saturday, November 13, 2021, the annual Monon Bell game will be held at Wabash College in Crawfordsville, IN. This event is something both the Wabash and DePauw communities look forward to all year. This year marks the 127th Monon Bell Classic and will be the first Monon Bell game played in Wabash’s new Little Giant Stadium.

The rivalry between Wabash College and DePauw University dates back to 1932, and has not changed over the years. Herds of DePauw students, faculty, staff, and alumni will venture to Crawfordsville to support their beloved Tigers and show their Tiger pride in celebration of 127th Monon Bell Classic in the hopes of keeping the bell at DePauw University.

DePauw students can look forward to the Monon Bell festivities all year, but the start of November typically gets the student body in the Monon spirit. Due to COVID-19, underclassmen have not experienced the Monon Bell game, as the 2020 game was cancelled. “I am most excited to experience a big rival football game and have fun with all my friends. I have heard many upperclassmen talk about how fun and exciting it is and I can’t wait to experience that myself,” sophomore Lauren Ringler said.

For some, this will be their first time experiencing the game as a student at DePauw. “I have been to Monon at Wabash before, but this will be my first time going as a student and I’m super excited. I have no doubt that we will keep the bell for another year. Roll Tigs,” junior Corinne Jones said.

For our seniors, this will be their last Monon Bell game as DePauw students.

For senior Jillian Kim, this year’s Monon game is a little sad. “I’m pretty sad that this is my last Monon because we weren’t able to have an official one last year. Last year, I lived in Broad Ripple and everyone who lived off campus had a fake Monon Bell game, but it just wasn’t the same. Everyone dressed like they were going to the Monon game, but it still didn’t feel the same,” Kim said. “The game my freshman year was at Wabash so I kind of know what it will be like riding the bus there and tailgating at Wabash, but I feel like it will be very weird since I haven’t been there since my freshman year.”

Senior Molly Ruggles expressed her excitement for this year’s Bell game. “I am super excited for Monon this year! In general, I think it’ll be packed, tailgating will be crazy as ever, and DePauw will keep the bell. Roll Tigs!” she said.

Ruggles isn’t the only one hoping to keep the bell. Our DePauw Tigers football team, just recently named conference champions this past weekend, are also hoping that the bell remains in their hands. “Monon is going to be as competitive as ever. They have a high powered offense led by their junior quarterback Liam Thompson, along with a dynamic rushing attack. Given this is the first bell game in their new stadium, I am excited to see the environment come to fruition,” senior linebacker Henry Locke said.

Coming off a conference winning season, the football team is spending the week preparing to take on the Little Giants in hopes of keeping the bell, and our student body, alumni, and everyone in between are preparing to cheer them on while they do so. Roll Tigs!