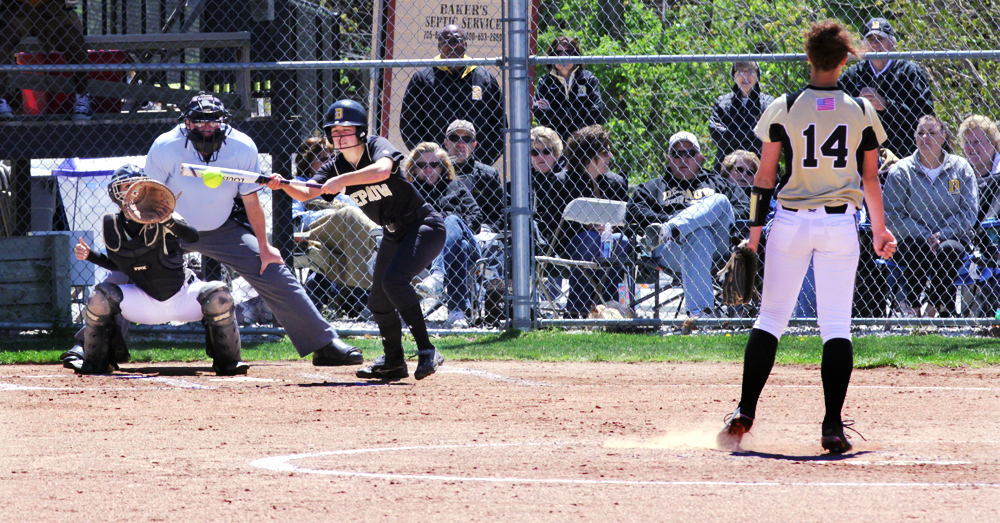 First-year Julia Waggoner (left) hits a pitch during the
Tiger's first victory of the day over Wooster College.
DePauw beat Wooster 9-1 then 4-0 in a double header on Sunday.
ZACH TAYLOR / THE DEPAUW

DePauw University women's softball team didn’t just finish their regular season conference play strong—they buried The College of Wooster, only allowing them to score one run in two games. Meanwhile, the Tigers racked up nine runs in the first game, and four in the second.

“Ending with a sweep was kind of a cherry on top,” first-year Morgan McCord said. “No, we didn't have to win the two games and we would have still won conference, but why not just go ahead and made our record better.”

With this finish, the Tigers officially claim their third straight NCAC title, which allows them to host the conference tournament this weekend.

“It was awesome to end the regular season with a sweep and to make our record even stronger going into the conference tournament,” first-year Alli Dennie said. “It’s nice to have this momentum because we are peaking at the right time of the season, so I feel really good about what we are going to do in the tournament.”

In the first game, the Tigers scored in streaks—hammering out three scores in the second, third and fifth innings. McCord, after stealing second, was the first to score in the second inning.

Other scorers of the second inning included seniors Jennifer Ridge and Taylor Golden, and at the end of the first game, the Tigers had 13 total hits, and nine scores. Sophomore Julia Waggoner, who’s single scored Ridge in the second inning, and junior Sammi Bell led DePauw with three hits each.

“I think our success comes from how strong our whole entire team is, we all are so versatile and anyone can come in and do the job at any given point in the game,” Dennie said. “Our teams defense and pitching was lights out. It's so nice to be able to go out on the field and know your pitcher is going to take care of business.”

The second game was a shut out, with DePauw winning 4-0. The scoring got started right way, with a bunt from sophomore Andi Sarkisian that got Bell to third. First-year KJ Holden came up with a ground ball that brought Bell in.

“I think our execution of the little things contributed the most to our wins,” Ridge said. “We put the bunt down when we needed and came up with the big hits when a bunt wouldn't suffice.”

The second two scores came in the second, and the final score came from a huge play by McCord—after stealing not only second, but third as well—and was brought in on a hit from Ridge.

“My favorite moment from the Wooster sweep was when Morgan McCord stole two bases in a row to get to twenty stolen bases on the season,” Ridge said of the final score.

Said McCord of the accomplishment: “Coach has been wanting a few of the girls on the team who are able to steal bases to get to 20 total stolen bases by the end of these two double headers. So my goal of the day was to get three more stolen bases. the first game I got one, then it was the bottom of the 6th inning, and I was up to bat and this was my last chance to get the two more before the conference tournament. I had been struggling to get on all day, I finally got a single. And as I was standing on first the dug out was going crazy. The other team was probably thinking why are they cheering so much for a girl who just hit a kind of mediocre base hit. But just seeing them go crazy because they knew I wanted to get two more stolen bases was amazing and it was the highlight of the sweep.”

Nine separate DePauw players had hits in the last game, with Sarkisian leading with two. First-year pitcher Emma Baldwin struck out 11 players in the game and picked up her 10th win of the season.

“My favorite moment against Wooster was watching every single one of my teammates enter into the game and seeing them do something beneficial for our team. It just shows the depth of our roster,” Dennie said.

The conference tournament starts this weekend, and will be hosted at DePauw.

“Right now our team focus is on each individual game in conference,” Ridge said. “We are the team to beat in conference, so we need to be at our best for each and every game.”

And even though the Tigers are trying to stay focused on one game at a time, they can’t help but look towards the future.

Said Dennie: “If we win [the conference tournament] it will be a huge accomplishment but winning the tournament is not our end goal...we have been preparing for something much greater.”