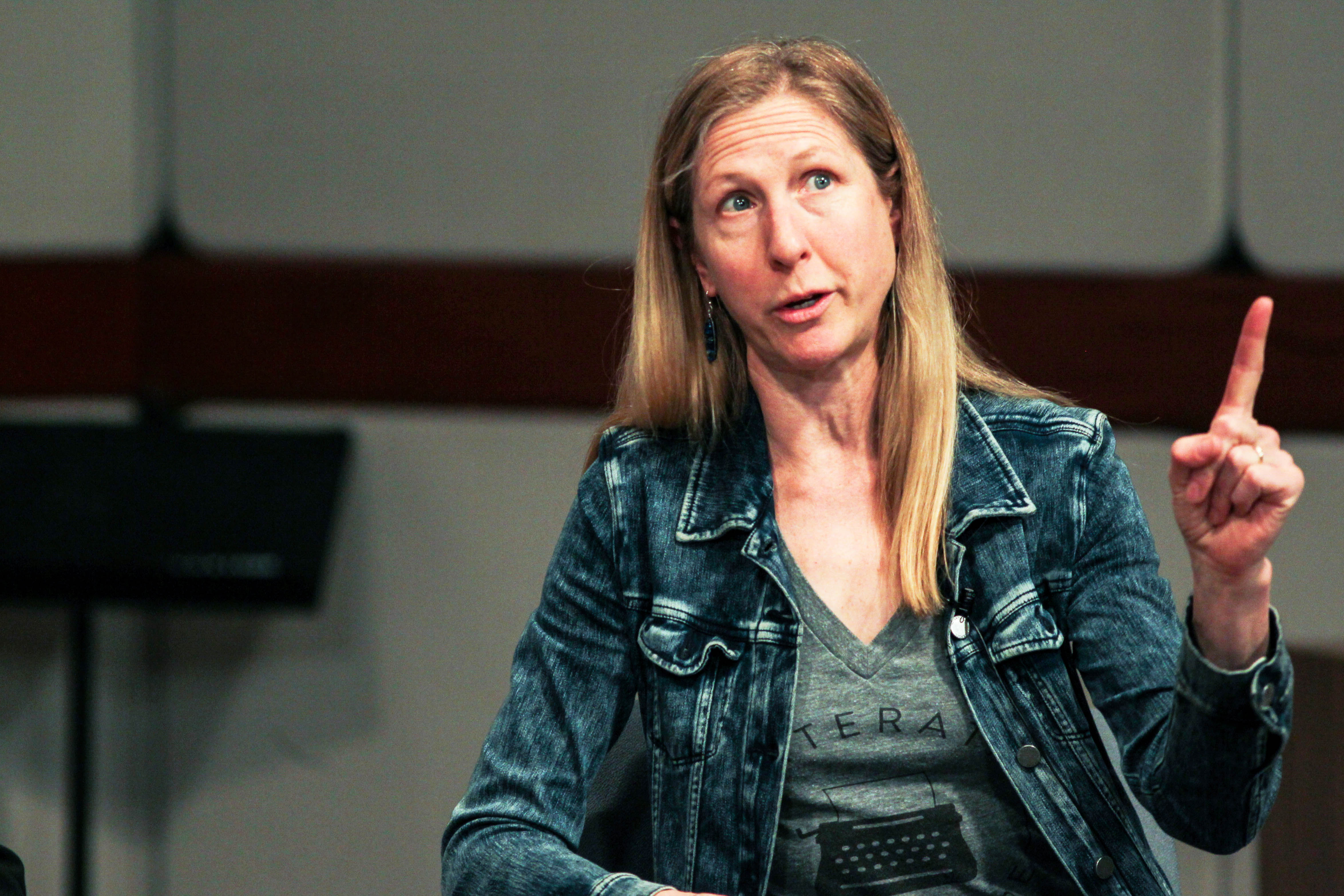 In Watson Forum on Tuesday evening, Eslami, the Boswell distinguished professor of creative writing, moderated and contributed to the conversation on writing as women. She painted a picture of the current political climate by mentioning the women’s strike set to take place on March 8 and the fact that March is Women’s History Month.

Campbell, a guest creative writing professor for the fall semester, will be one of many distinguished writers to spend a semester teaching at DePauw due to a grant named after Mary Rogers Field and Marion Field-McKenna, the deceased wife and daughter of former English Professor David Field.

In addition to this distinction, Campbell mentioned her ironic status as one of “Nine Writers Carrying the Torch for Men’s Fiction" according artofmaniless.com.

In response to Eslami’s question about how gender has affected her craft and career, Spiotta, the most recent-visiting Kelly Writer Series guest, noted that despite women’s established presence in the literary world, it still felt like she was in the minority.

“It doesn’t seem that weird for women to be writing because women have been doing it a long time,” Spiotta said. “Most readers of literary fiction are women, agents are women, publishers are women, but it still feels male dominated.”

Campbell added that the work of minority writers come with certain expectations and added pressures.

“It’s hard to break into writing if you don't write the type of book that meets expectations,” Campbell said. She also said that the common misconception was, “As a woman writer, you represent all women.”

As the conversation transitioned from culture to craft, however, the tone became more optimistic. Eslami’s question about structuring stories ended with a pep-talk addressed to the aspiring writers in the room.

“You get to a point where you run out of steam, but you have to trust yourself,” Campbell said. “The energy is in there. You have to go in there and excavate it sometimes.”

The three novelists took turns giving writing advice, each feeding off the other. Campbell compared novel writing to earning a black-belt: what seemed like the end goal became a starting point. Spiotta agreed, saying more plainly that the meaning of novels change as they’re written and it’s often not until the end that writers discover what the story is truly about.

“It kept me up at night. It was too perfect; life’s not like that,” Campbell said about the ending of a short story that later became her novel “Once Upon a River.” “You know, you shoot a guy’s you-know-what off—that’s just the beginning.”

During a home cooked dinner provided by the Women’s Center for the panelists and audience after the talk, students discussed with each other what they found most helpful about the talk.

Senior and English writing major Benton Crider quoted a piece of Spiotta’s advice that he found encouraging: “If you practice everyday for ten years, you have no idea how good you’ll get.”

“I really enjoy hearing authors talk about craft,” said senior and English writing major Leah Williams. “Even if it doesn’t all work for you, you can take bits and pieces of it.”

Professor Joseph Heithaus, coordinator for the Kelly Writer’s Series, reflected on the panelists and their discussion. Campbell’s presence on campus as the Mary Rogers Field and Marion Field-McKenna Distinguished University Professor of Creative Writing, in particular, held special meaning for him.

Heithaus said of Mary Rogers and Marion Field, “Both of these women were incredibly literary, and for me, because I knew them both very well—Mary is my daughter’s godmother—it’s cool that especially a woman, Bonnie Jo Campbell, is sort of living out the spirit of these two incredible women.”