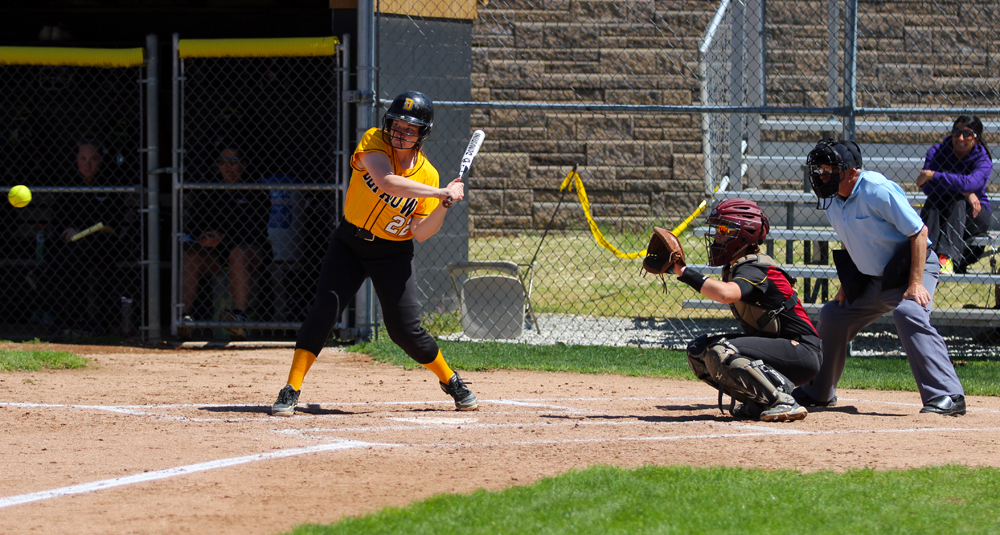 Freshman Kathleen Byers swings at a pitch during
the Tigers double header against Oberlin College.
DePauw trumped Oberlin 11-0 and 9-1.
SAM CARAVANA / THE DEPAUW

With the doubleheader split, DePauw is now 17-10 overall, while John Carroll sits at 16-10.

“Against John Carroll we went in with intensity and never lost it through out the whole game,” first-year Morgan McCord said of the first game.

The Tigers didn’t let up at all against the Blue Streaks. “We made sure that even though we were winning, we kept getting runs,” McCord said.

“This game allowed for the coaches to move people around to see what we need to do for conference games,” McCord said. “It kept John Carroll from coming back like we did in the Hiram game. It shows that we learned something.”

Even though DePauw lost in the second game and only scored three runs, the team isn’t worried about their offense.

“We hit the ball hard all day,” junior Sammi Bell said, “even though the score in the second game doesn't reflect that our bats are hot right now.”

Hitting has continually been one of the Tiger’s biggest strengths this season but their success doesn’t just happen.

McCord focuses more on the mental aspect that she thinks benefits her team.

“Our offense strength came from all of us having a plan going up to the plate,” McCord said. “We all waited to get our pitch instead of chasing pitches that we didn't like or couldn't hit well. We also kept the ball on the ground and made them make the plays, which resulted in errors allowing us to have long offensive innings.”

Pitch selection has been enforced for the Tigers all season. One of the top hitters of the game senior Jennifer Ridge believes that this success can and will be continued through the end of the season.

She had three hits, equaling the output of first-year Elizabeth Getz. Classmate Linsey Godden, who was the NCAC player of the week last week, had two.

“Playing an out of conference game was really fun because John Carroll is a fantastic opponent that is in our region,” Ridge said.

Not only are out-of-conference games enjoyable for the team, they are also beneficial.

“We treated these non-conference games just like we would a conference games with the same amount of focus just to keep ourselves prepared,” McCord said. “I think these two games will help us play better agains OWU.”

When it comes to the out-of-conference schedule, the team feels appropriately challenged.

“Our coaches do an amazing job scheduling our out-of-conference schedule to be tough and competitive,” Bell said. “John Carroll is a great program, Illinois Wesleyan is also a great program and a ranked team.”

“I feel that facing these two exceptionally talented teams will only push our skills to be better and to sharper going into the conference games Wednesday against OWU,” Bell would go on to say.

The Tiger’s play at Illinois Wesleyan today and will face the conference rival Battling Bishops on Wednesday, also away from Greencastle.