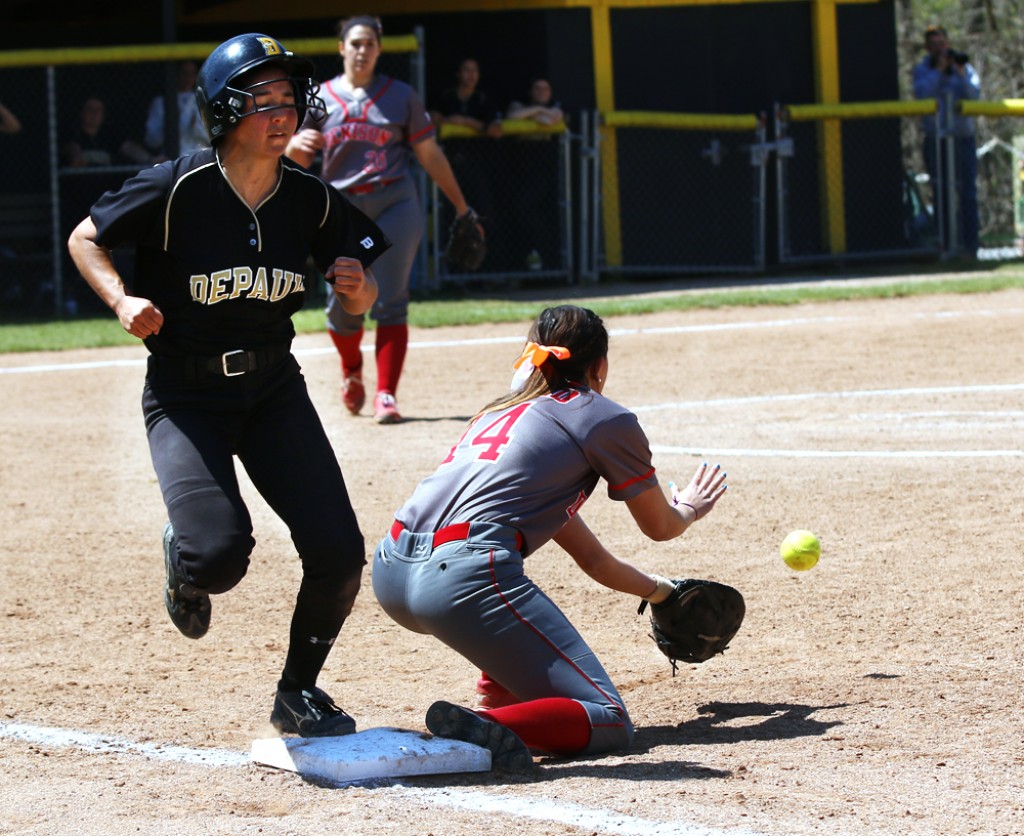 Sophomore Gabby Smart safely makes it to first base during
the Tigers' first round game in the NCAC tournament. DePauw brushed
ast the Big Red 9-2 on their way to winning the confernece tournament.
SAM CARAVANA / THE DEPAUW

After finishing their regular season already as the North Coast Athletic Conference champions, Tigers softball was able to then host the conference tournament this past weekend—and they completed their dominance in the NCAC with flying colors, as a team.

The Tigers defeated Denison University 9-2 in the weekend’s first game, and then were victorious against Wittenberg University 1-0 on Friday. After dropping the first game on Saturday to Denison 8-0, the Tigers responded in the championship game, defeating the Big Red 6-0 to claim the crown.

“To be the NCAC tournament champs again is a nice feeling because the upper classmen tried to describe the feeling to us, but it was hard to imagine until it actually happened,” first-year Morgan McCord said of her first NCAC tournament victory.

“The team is really excited for our win this year,” Baldwin said. “Every year, some players leave and new players come, so each team is different, but the returning players had the drive this year to repeat last year's legacy as tournament champions, and the freshman wanted it too.”

The class of first-years had a huge impact on this weekend—one of the main highlights was a home run from Alli Dennie against Denison.

Said Baldwin of the play: “My favorite moment from the weekend was probably Alli Dennie's home run in the first inning of the ‘if necessary’ game against Denison. It started the game off on a good note, and it really felt like we could rebound and hit against the pitcher who we had just gotten shut down by in the previous game.”

The Tiger’s had just been dropped by Denison in the previous game 0-8, and Dennie helped get the team off to a good start.

“I just felt a spark from my team and everyone's bats came alive, the energy was unreal,” Dennie said.

Thanks to that home run, Dennie was able to spark a rally from the Tigers and led them to defeat Denison in the next game. However, according to McCord, DePauw University was never too worried.

“We have never been swept in conference, and we knew it wasn't going to happen that day,” Dennie said. “Plus Baldwin, our pitcher of the second game, pitches even better under pressure so I knew she was going to kill it.”

Kill it she did—since Baldwin went on to be named MVP of the tournament.

On being the MVP, Baldwin said: “Of course winning MVP was an honor but there is no way to win a tournament without an offense or a defense behind me. My team and their success comes first and I am just glad I could help them win the tournament. Many players on our team could be named MVP and we would all be proud of them and think them deserving. Winning a tournament is a team effort and I couldn't be happier with how my team played. Without a team there is no MVP, so although the honor is nice, the team honor comes first.”

The softball team has consistently referred to their success this season as a team effort first.

“We are able to rise above adversity and pick each other up when mistakes happen. An opponent's great plays, pitches, or hits never cause us to doubt ourselves and our abilities,” said senior Jennifer Ridge.

The NCAC tournament victory has led them into the NCAA tournament in a first round match up against Washington University-St. Louis.

“I am so excited to play Washington-St Louis this weekend,” Ridge said. “We have already played them once this year, so their pitchers and hitters will not be a surprise.”

More than playing the game, however, Ridge is simply enthusiastic to play with her team.

“What I am excited for the most this coming weekend is the chance to showcase our talent and chemistry as a team,” Ridge said. “What makes us different then many of the teams in the tournament is that we don't rely on one or two players, instead we have a team chalk-full of talented, hard working players.”

The Tiger’s first NCAA tournament game will be at 3:30 p.m. this Friday, May 8 at DePauw.