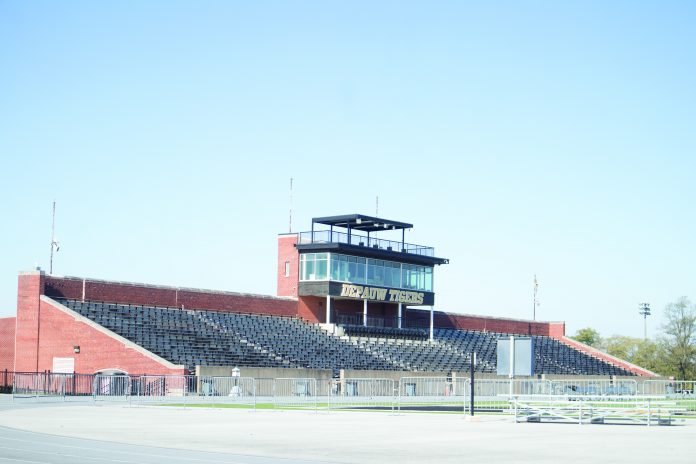 After missing a year of the DePauw Tigers vs Wabash Little Giants football rivalry in 2020, this Saturday, November 13 at 1:00 p.m., Wabash College will host the Monon Bell game. Originally, the 2021 game was scheduled at Blackstock Stadium in Greencastle, but COVID-19 spoiled those plans. The teams agreed upon keeping the back and forth tradition and decided on an away game for the DePauw Tigers this fall, despite the fact that the Tiger’s turn was missed.

Head football coach Brett Dietz approves of the away location, “It’s such a close game, being only 40 miles away, that travel does not really affect either team. There will be a big crowd on both sides,” he said.

This will be Dietz’s first year as the head coach for the Monon Bell game. He has been coaching at DePauw since 2010 and previously served as the offensive coach until January 2020. He recalls the 2016 game played at Little Giant Stadium when the Tigers broke the streak and won for the first time in six years. He said that despite the records going into the game, it is a high energy game every year. Dietz explained the respect both programs have for each other and his excitement to play this rivalry game again.

Senior and student coach Jake Labus shares this excitement. Labus was originally a starting inside linebacker, but after a diagnosis that put an end to his career during his sophomore year, he found a way to stay involved as a coach.

He explained that the team makes a point to treat this game like any other. The team sticks to their traditions of eating in Hoover together and watching films in Julian as a team. The only difference, he shares, is the 45 minute bus ride.

“I actually love going into enemy territory. For me, it’s like free fuel seeing red everywhere and their fans yelling at us. It fires me and my ‘teammates’ up,” Labus said.

He also shared that Wabash's stadium is not a downside either, saying, “[Wabash] just rebuilt their stadium to be more conducive to a bowl-shape. It’s even louder in there, so it’s fun.”

Senior and Captain Charlie Gruner agrees they will keep their focus clear to take care of business. Gruner finds motivation from his family and friends who are traveling from Chicago, Illinois to watch. It will be a very emotional day for Gruner and he is ready to leave it all on the field for one last time against the Little Giants.

“Graduating with only three bell games is a little weird. But not having played this game in two years gives the team a lot of motivation, especially with the great season we have had,” he said.

Contrary to these opinions, some students wish the rivalry stuck to the original plans.

Avid fan and senior Elizabeth Bell was disappointed when she found out Monon would be at Wabash this year. She recalls fond memories of hosting the game during her sophomore year, saying, “When Monon is here it brings energy to campus. I remember the entire ‘Bell Week’ everyone was jittery and anxious for Saturday.”

Bell is still excited to attend Monon at Wabash, but will be missing the extra black and gold spirit this week.

As for the rest of Tiger football fans, they will have to pack up their tables, blankets, and tailgate recipes to travel to Crawfordville. The large tailgating area along the railroad track will provide room for both fans to set up their festivities. Fans and players can plan for Monon 2022––and every even year from now on––to be held at Blackstock Stadium.