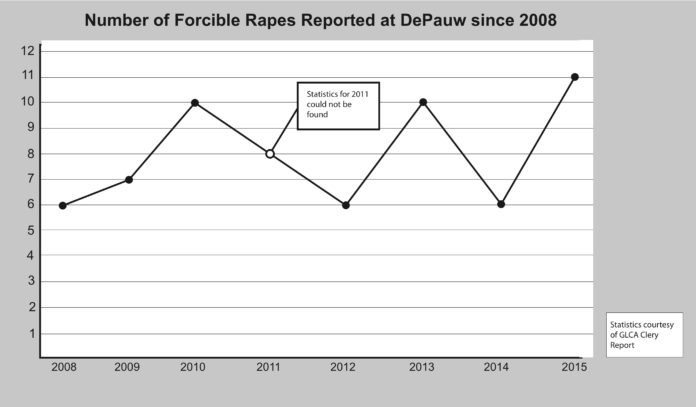 *This article contains some content which may be disturbing or triggering to some readers. Reader discretion is advised.*

Angel Torres was a student at DePauw University for just two weeks before she was sexually assaulted in her dorm room.

Her case was the first reported sexual assault of the 2016-2017 academic year. Her alleged attacker was an upperclassman male whom she considered a friend.

The situation started with a text after midnight on Sept. 6, in which he asked her to  “come kiss him.” He said he hadn’t been drinking and she believed him. “I took him at his word,” Torres said. He came to her room in her first year residence hall. She made it clear to him that nothing else would happen, but the situation escalated without her consent.

“I kept telling him no, I didn’t want anything else to happen,” Torres said. She told him to stop, and he continued.

Torres could sense the situation was not going the way she wanted it to, and her efforts focused on escaping her dorm room. “He wouldn’t let me go,” Torres said. Torres says her alleged attacker violated her, touching her repeatedly in uncomfortable ways without her consent.

Torres was able to get her cell phone and message her friends and roommate for help. When her friends came into the room minutes later, Torres’s alleged attacker was still in the room. “He was motionless, he was just sitting there like a robot,” Torres said.

After he left, Torres’s resident assistants came and Public Safety was called. “That was the point I started to break down emotionally,” she said. “I could barely even talk to the officer.”

For over a month since this incident took place, Torres has been waiting to hear about the fate of her alleged attacker. From the time Public Safety was called, Torres’s case entered a five-part system under Title IX. Torres’s case was first reported, then it was examined to see if there was a break in Title IX policy. It was determined there was, so a formal investigation began, spearheaded by Public Safety.

The second part of the process, where the report is reviewed to see if it fits within Title IX jurisdiction, is an addition to the Title IX process as of this academic year.

Torres is satisfied so far with the attention she has been given by Title IX. “They’ve helped me from the start,” she said. “There’s an active process they’re following.”

The most extreme sanction that can be delivered to a student is expulsion and not being permitted to enter campus.

“I don’t want a student ever to feel like we let them down in a process,” Madison said.

Seung does not feel the University takes the safety of women and sexual assault seriously enough and wants to see more resources and care put into protecting students. “It’s just frustrating to see the University do so little,” Seung said.

Seung believes one of the best ways to prevent sexual assault is to educate and discuss what consent is as well as how to respect personal boundaries.

“This is not how I wanted to start my adulthood,” said Torres, who over a month later is still suffering from the effects of her sexual assault.

Torres has missed classes, met with counselors and has been afraid of being taken out of school by her family, all of which has had a major affect on her life and her mental health.

“I don’t want to leave, that makes me look weak,” Torres said. “This (sexual assault) happens everywhere, so what’s the point of leaving when it’s bound to happen anywhere, to anyone.”

Torres hopes her alleged attacker is forced to leave the University, because she believes there is always potential to have this happen again, to another person.

“I wish people knew how much damage this caused me,” Torres said.

Torres should learn of the fate of her attacker by the end of October.
This story is the second part of a third part series.