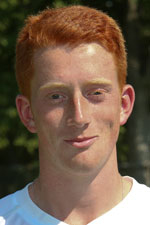 Morrison has been the backbone of DePauw University soccer ever since his arrival to Greencastle four years ago. His 41 career goals for the Tigers ranks Morrison third on the school’s all-time scoring list. In his first season with the program in 2011, Morrison scored 10 goals and followed that performance up with 12 more during his sophomore season. His 14 goals during the 2013 campaign were a career high and led the team. A hamstring injury limited his effectiveness this season, as he scored a career-low five goals, however he did tie a personal best of seven assists this fall. Morrison was a part of two conference championship teams with the Tigers and made two career trips to the NCAA tournament.

After a slow start to his DePauw career averaging 3.3 and 5.3 in his first two seasons, Fernitz exploded onto the scene in the Tigers’ 2013-2014 season. He averaged 14.8 points per game and 9.9 rebounds a night, coming just shy of a double double season. Despite an injury that plagued senior campaign, Fernitz increased his average points per night, scoring 15.2 points per game. As his health improved, Fernitz became an integral part of DePauw’s run to an North Coast Athletic Conference title and then to the second round of the NCAA tournament. Saving his best basketball for last, Fernitz averaged just under 15 points a game during the Tigers’ run through conference and then the national tournament.

What hasn’t Savannah Trees accomplished during her time at DePauw? Her illustrious resume with the Tigers includes three conference titles, four national tournament appearances, a national championship and the top spot on the school’s all-time scoring list. Trees has averaged in double figures in points in each of her final three seasons with the program, including a career-high 16 per night this past year. She’s also been a workhorse for the program. After coming off the bench her freshman season, Trees started all 34 games of the perfect national championship season from 2012. She then started all 32 games her sophomore season and kept the streak going, failing to miss a single game this past season.