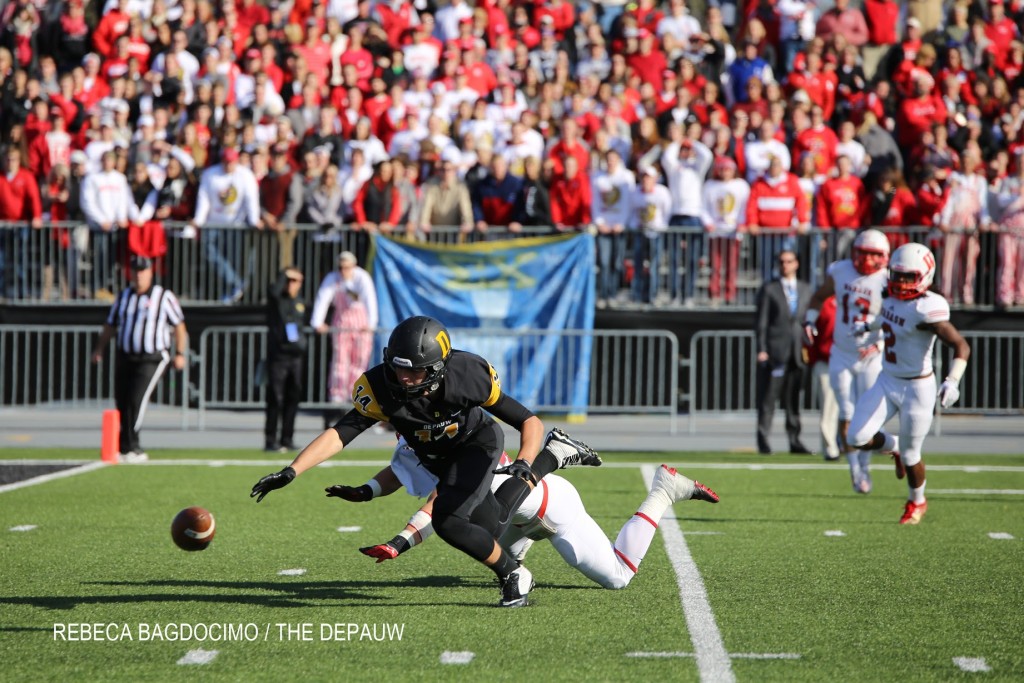 In what was heralded as DePauw’s best chance to end their losing streak to Wabash College, the 2015 edition of the Monon Bell Game stayed consistently lopsided.

For the seventh straight season, the Little Giants (10-0, 9-0) rolled over the Tigers (8-2, 7-2) in blowout fashion, retaining the bell with a 45-17 win at Blackstock Stadium on Saturday afternoon.

With the win, Wabash claims the North Coast Athletic Conference title and claims the automatic bid to the NCAA playoffs that comes along with it. For the Tigers, the loss ends their season, after a midseason loss to Ohio Wesleyan University killed their chances at an at-large bid.

“We knew they were going to make plays, and we knew we were going to get some plays too, but they made more plays than we did and the score showed that,” junior quarterback Matt Hunt said.

Thanks to injuries, the Tigers were at a disadvantage before the game even kicked off.

The DePauw defensive line was thin right up the middle after senior Mike Mitsch went down with a broken fibula in practice earlier in the season. Junior Peter Nelson was also out for the Tigers after suffering a season-ending ACL tear.

“Mike and Pete are a luxury that we didn't have this week,” junior linebacker Will Longthorne said. “They are both so good and provide powerful performances week after week. It was tougher without them but at the end of the day it is a team effort and we didn't make enough plays.”

On offense, DePauw’s stable of running backs was also weak. Senior Amen Galley missed out on his final collegiate game with a torn ACL and first-year Ramon Lopez also didn’t suit up. Junior Jason Kirchhoff played, but was limited with a broken hand.

When things did get started, it was turnovers that cost the Tigers a chance at breaking out of their Monon losing streak.

Hunt threw an interception on the game’s opening drive after the Tigers had been moving the ball effectively. Wabash quickly took advantage of DePauw’s mistake, finding the endzone in just two plays.

After the two teams traded touchdowns, the Tigers found themselves with possession and marching toward a score that could tie the game.

The drive looked promising after a 21 yard completion from Hunt to his little brother, first-year Andy Hunt, put the Tigers inside the Wabash 35 yard line. But the Tiger's luck would run out, as the Little Giants recovered a Kirchhoff fumble on the next play. Once again, the Little Giants took advantage of the turnover, as Mason Zurek found the endzone on a 10 yard run.

The Tigers managed to keep themselves in the game with a 37-yard field goal from junior kicker Marko Adams to make the score 21-10. But the Little Giants would have an answer, as quarterback Connor Rice would take it himself into the endzone on Wabash’s next drive.

With the Tigers trailing 28-10, Hunt had DePauw driving once again late in the first half. On this occasion, he had his pass picked off by Delon Pettiford in the endzone. This time, the Little Giants marched 47 yards in 4 plays and put themselves in position to extend their lead to 24 with a field goal as time expired.

“We had 3 first half turnovers and were down by 3 scores going into halftime, not to say there is a direct correlation between those two numbers, but I think they are related in some way,” Hunt said.

The two teams traded scores on their first possessions of the second half and the Little Giants rounded out the scoring with a five yard touchdown pass to Sammy Adams.

Hunt finished the day with up and down numbers. He completed over 50 percent of his passes for 244 yards and two touchdowns, ran for a career-high 129 yards, but threw two costly interceptions.

Kirchhoff was the only DePauw running back to get any touches, rushing for just 18 yards on 10 carries.

For the Little Giants, running back Mason Zurek provided most of the pop on offense. The senior finished out his regular season with 278 yards on 37 carries and finished with two touchdowns.

“Obviously we had a tough time,” Longthorne said. “When you can't stop the run you're in for a long day.”

The 2016 version of the Tigers will likely similar to what fans saw this fall. Hunt will be back under center and DePauw will return most of its receiving core, except for Connor Jeffers who will graduate in May. The Tigers will lose Galley out of the backfield but Kirchhoff proved this year that he’s more than ready to take over as the primary tailback.

On defense, the loss of the Mitsch up the middle and senior Adam Folta in the secondary will hurt but junior linebackers Will Longthorne and Tommy Gray will be returning.

“[I’m] especially proud of our seniors,” Lynch said. “They really made great strides in their career here. They went from two wins, to four wins, to seven wins, to eight wins and that’s not easy.”

Only time will tell if the Tigers will continue that progression of improvement. A loss to Ohio Wesleyan has hurt their postseason hopes the last two seasons and they’ll also have to keep an eye on Wittenberg and Denison.

But sometimes the biggest measurement for DePauw’s improvement is how they play against their rivals up north.