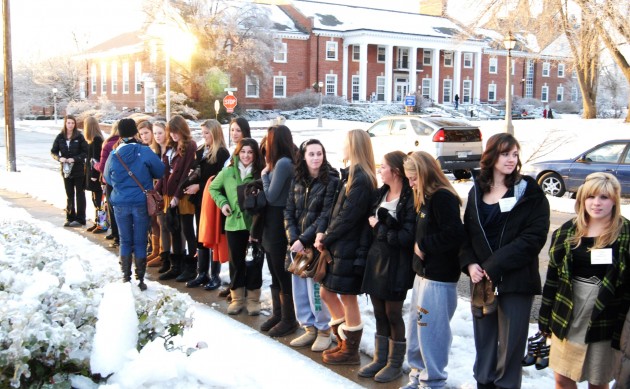 Every Christmas, LeeAnn Biggs '84 serves "Pref Night Pie" to her family, who understand the meaning behind the dessert. It started as a sorority tradition; Biggs served it on preference night ­— the last night of rush — at Alpha Chi Omega while she served as rush chair her senior year.

"Everyone knew what Pref Night Pie was," Biggs said.

The dessert remains a mainstay at her dinner table, and she recalls that different houses had their own specialties. Alpha Chi was known for its pie.

"Houses were known for different things. As a chair, you were trying not to duplicate things," Biggs said.

While the desserts have changed over the years, men's and women's rush has mainly stayed the same with a few exceptions; most notably, the switch to second semester.

Dave Bohmer '69, director of the Media Fellows program and an alumnus of Delta Upsilon, recalls having rush during the first week of college.

There were 13 fraternities and 10 sororities at that time, and rush took place the week before classes began. The men would move into their houses immediately, while women moved in sophomore year.

Rush for men and women is still one week, but now happens following Winter Term so students can spend first semester meeting greek students. Biggs and Bohmer had family ties to other greek houses, but were unfamiliar with most of the chapters at DePauw.

"You were not allowed to have any contact with houses, nor did you really know anything about them unless you knew alumni," Biggs said.

Biggs said although the freshmen may not have known about any of the houses, chapters hadn't made up their mind about the new recruits either.

"Being known is both an advantage and disadvantage, makes it better and worse," Biggs said.

Professor of communication Jeff McCall '76, who was a Lambda Chi Alpha, said it was hard to form a clear opinion of the houses, but having less information about the houses was in some ways better.

"I guess I would say the houses were more alike back then because the rushees didn't have the time to stereotype into certain houses," McCall said.

He added that although less information may have affected decisions negatively, the system today is not perfect either.

"I'm sure there were times people didn't get matched very well or bad decisions were made but that still happens now," McCall said.

For Laura Dunshee '87, who joined Alpha Chi Omega, having rush at the beginning of the year was a way to meet older women.

"I think the best thing about it was the exposure to so many upperclassmen so soon," Dunshee said.

Although placement tests and orientation took place during the same week, everyone knew they were on campus primarily to rush. When Dunshee experienced rush, there were four rounds and 10 houses. The rounds were conducted in a similar fashion to today, with Round 1 called the "cookie and punch" round. Attire became more and more formal after potential new members eliminated four houses.

"I can remember wearing a wrap skirt and polo and thinking I was really something," Dunshee said.

The cocktail dresses of today's final round equaled the bright pink dress that Dunshee wore. The conversation became progressively more serious, and Biggs remembers feeling like she was proving herself to the sorority women.

"It starts to get to be that game, there was a little bit of that," Biggs said. "And it's a confidence thing. You are gone from home for five minutes and you have to make this monumental decision."

Bohmer also recalls feeling the gravity of his decision.

"In one week, your life has gone through major changes," Bohmer said. "You are leaving home for the first time . . . Meeting brand new people, getting ready to start classes at a college, and I'm now picking out where I'm going to live for the next four years of my education."

Although a monumental decision, Bohmer said the new recruits did not have the time to think too hard about the details.

Biggs wondered if she had made the right decision, but her overall rush experience was positive.

"I mostly had a very good time, very, very big decisions — there is a lot riding on it, but it is also a fun ride," Biggs said.

Greeks have been on campus since 1845, when Beta Theta Pi fraternity appeared on Indiana Asbury University's campus. The first greek letter sorority – Kappa Alpha Theta – was founded at DePauw in 1870.

PJ Mitchell '06, a greek life coordinator and an alumnus of Phi Kappa Psi , believes the future of greek life looks strong so long as greek students and independent students unite.

"I think there is always a lot of small tweaks and making things better here and there," he said. "As a community, something we need to improve on is the relationship between all of our groups. Bringing more visibility and programming to all students is something we are really working on."