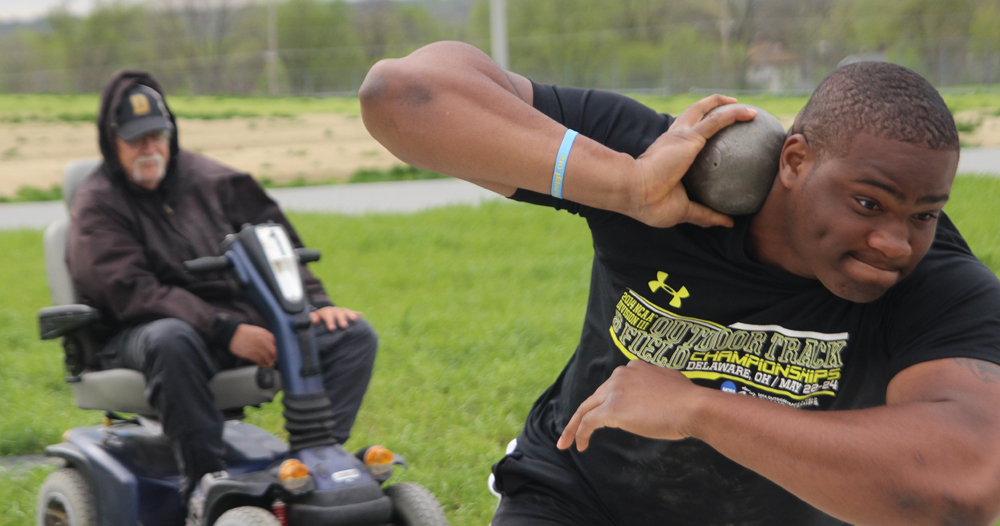 Tim Hreha (left) looks on as junior Marcus Dozier (right) practices shot put
behind Blackstock Stadium on Monday. Over the weekend, Dozier posted
a discus throw of 53.36 meters, the longest in Division III in the nation.
SAM CARAVANA / THE DEPAUW

The fact that Marcus Dozier is only a junior at DePauw University is hard to believe. And for good reason.

Let’s start with where he stands in DePauw’s track and field history. As of now, he already holds the indoor and outdoor shot put record, and is six feet away from breaking the school’s discus record. Not bad for someone who made it his goal to outperform what he did his sophomore year.

“After last semester, everyone just assumed…they [were] like, ‘oh, are you a senior?’” Dozier said. “Placing sixth at nationals [my sophomore year], I mean, that’s really, really hard to beat. But then I come into this season, and…break the record on the first meet, and qualify for indoor nationals…I’m very excited.”

But Dozier hasn’t only impressed DePauw. He is currently ranked second nationally in shot put and 19th for his discus throwing.

“What’s probably the best thing about Marcus is that he’s just a fun guy to be around,” Kori Stroffregen, DePauw track and field head coach said. “And so, it’s easy to coach him, and easy to be motivated by him. He wants to be a lot better, so that’s what we’re all kind of striving for now.”

Standing at 6’2" and 255 pounds, Dozier works out three to four times a week in season, watching what he eats the day before each meet. When it comes to practice, Dozier tries to make the environment as similar to a meet as he can.

“You can’t change the weather at a meet,” Dozier said. “If it’s raining, I’m going to practice in the rain. I’m not going to go inside just to change things up.”

While being one of the best is always a good position to be in, it has its challenges as well. Everyone has their eyes on Dozier, and of course, everyone wants to beat him. But Dozier welcomes the challenge.

“Now the expectations there,” said Stroffregen. “It’s a high expectation and he likes that and wants that.”

Last week’s meet at Rose-Hulman Institute of Technology was nothing new for Dozier, as he placed first in both discus and shot put while also posting the longest discus throw of the year in all of Division III track and field.

With the North Coast Athletic Conference Championships just over a week away, and nationals not far behind, Dozier looks to put the finishing touches on his monster of a season.

“I always walk through the Lily Center and see the pictures on the wall of the four individual [national] champions at DePauw,” Dozier said. “I want to be the fifth one.”