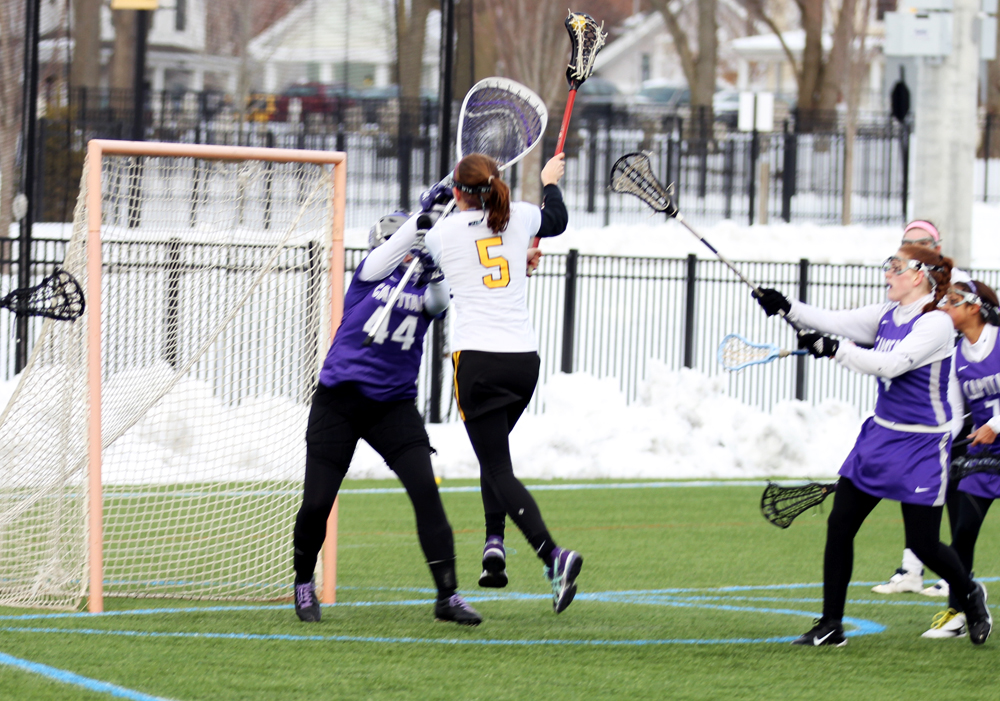 Senior Carey Kunz shoots during a breakaway versus Capital University.
The Tigers went 7-9 overall and 3-5 in the
North Coast Athletic Conference this season.
SAM CARAVANA / THE DEPAUW

After three years of being a varsity sport the women’s lacrosse team made waves this season bringing home seven victories to mark the team’s success rate.

In the 2015 season the women finished 7-9 overall and 3-5 in North Coast Athletic Conference play, compared to their three victories from a season ago.

For the seniors on the team the past few seasons have been a whirlwind.

“Looking back at the past three years, it's amazing how much the team has grown and changed,” senior Carey Kunz said. “Being a part of a first-year program is something not everyone gets to be a part of and it really has been fun to see the changes and the history that has been made from the start.”

Senior Megan Morrison adds that she has seen so much improvement over the years.

“This was a great last season for me as a senior, we had some amazing freshmen join our team this year and everyone on the team clicks well,” Morrison said.

The biggest uproar and highlight for the Tigers was their match up against Ohio Wesleyan University on April 14. DePauw started off trailing behind the Battling Bishops, but with help from sophomore goalie Liz Hawkins, who made a save with 46 seconds remaining to keep the Battling Bishops from tying the score, and the Tigers’ teamwork DePauw slid by and defeated Ohio Wesleyan by just one goal, 14-13.

First-year Emma Flynn agrees with Kunz that it’s been a great season.

“There have been so many highlights. Despite the score we always played our hardest this season, fighting for the whole 60 minutes,” Flynn said. “That showed especially when we beat OWU.”

Another successful game came early in the season when the Tigers faced Trine University defeating them 21-2, DePauw University’s widest margin of defeat. This was the team’s first victory of the season.

Over the course of the year, the Tigers faced tough practices and games, but through it all they grew closer as a team and have become a stronger program.

Kunz mentioned the most challenging part of the season was learning how each opposing team worked.

“Each game is interesting because every team plays a different type of attack or defense and we had to learn to adjust to each style of play,” Kunz said.

The Tigers biggest deficit came when the team faced Augustana College at the beginning of April. The Vikings were in control throughout the match up. They outshot DePauw 42-19 including 32-16 on goal. Augustana also held a 23-16 edge in ground balls and 20-12 in draw controls. The Vikings were 12-of-17 in clears with DePauw successfully clearing 8-of-16 opportunities.

Even though the Tigers were faced with a new battle starting every game the women learned how to play with each other.

“We figured out each others strengths and were able to put that together to work as a solid unit on both attack and defense,” Kunz said. “We also became a lot more confident in our abilities, and after that it seemed like everything came together and we were able to win more games.”

The Tigers have a bright future in upcoming seasons with a young team, as only three seniors will be graduating. Even though the seniors who were with the team from the beginning are leaving they are excited for how the team will grow.

Said Morrison: “It's been a great experience for me to play lacrosse these last three years and I'll miss playing, but I know our team will continue to improve so I look forward to seeing how they do in the future.”