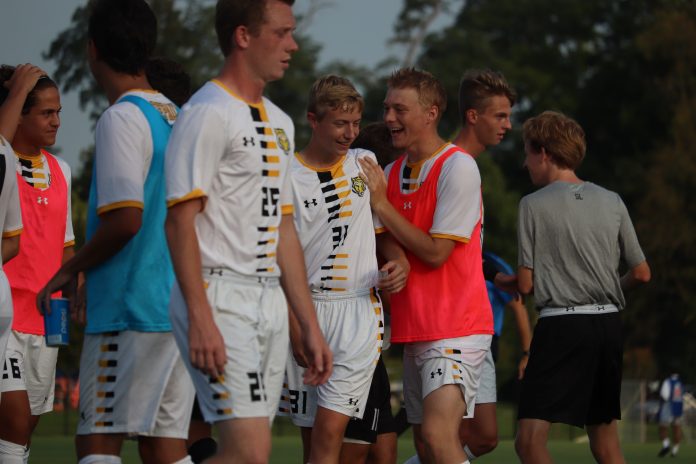 The Tigers beat the St. Mary-of-the-Woods Pomeroys 3-2 with  a last-minute goal in their home game on Tuesday, Oct. 3.

The Pomeroys started strong with high-pace attacks, disorganizing DePauw’s defense.  The first goal was scored by St. Mary-of-the-Woods 13 minutes into the first half.

The rough start did not discourage the Tigers according to coach Brad Hunter.

“The early goal against us didn't change our style of play, but it did change our focus, and in that match that was a critical piece,” Hunter said.

The Tigers fought back to win possession in the rest of the first half and kept constant pressure on Pomeroys’ goal. They made a total of 15 shots compared to only three from the visitors. Sophomore Jack Schrepfrman tied the game in the 34th minute with an assist from first-year Zach Napora.

The hosts continued their offensive game in the beginning of the second half. They used one-touch passes to break down Pomeroys’ defense. The defenders moved up to midfield to deliver long balls and make early interceptions.

In the 49th minute, the Tigers took the lead when senior Sam Kramer scored his first goal of the game. After a right-wing cross from first-year Quinn Flaspohler was blocked, Kramer tapped the ball into the net.

The team pressed hard to prevent the Pomeroys’ attacks. The defensive midfielders stepped back to cover the spaces and the guests could not get passed DePauw’s defense.

The Pomeroys equalized from a dead ball. In the 79th minute, Nabilsi scored his second goal with a powerful freekick from the right. Senior goalkeeper Dylan Ruzbasan could not make a clean save and let the ball slip through his hands into the net.

At the end of the game, the referee called for a left-wing free kick for the team. Senior Jake Brady curved the ball to the back post. After a cross from junior Jake Limauro, Kramer scored again with a low header to the left corner.

The Pomeroys flocked into Tigers’ penalty box for their final attacks. They tried to play long balls and take over the aerial battle, but DePauw’s defense managed to make clearances. The game ended 3-2 in favor of the Tigers.

“At half time my coach talked about playing free kicks past the goal to be headed back across the net,” Kramer said of his last goal.

Senior captain Jay Klein continued to make an impact despite being closely followed by the Pomeroys’ defenders.

“As a senior, most teams know me by now and typically will have a double team on me. I want this,” he said. “This allows me to draw in two players at once which in turn opens up more space for me to assist my teammates.”

The Tigers will play next at Wooster College on Oct. 5 at 12 p.m. Stay tuned for more action from the team.