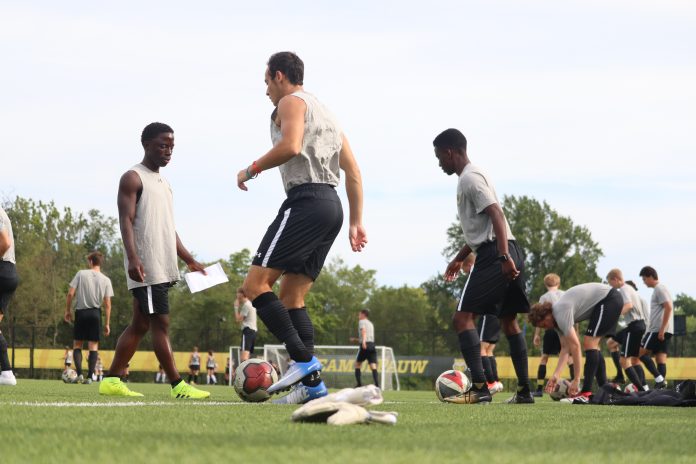 The DePauw men’s soccer team had an easy win over the Anderson Ravens in their home opener on Sept. 3 with a final score of 11-0.

From the beginning, the Tigers out-dribbled the Ravens and controlled the ball most of the game. Crosses from both wings were a threat to the Ravens’ keeper. Within the first 12 minutes, junior Grady Bruch scored the first goal.

The Tigers slowed their pace after substitutes came in. The Ravens had a few chances to score, but the Tigers' defenders made prompt tackles and saves. Towards the end of the first half, sophomore Jalyn Crittenden smashed the ball into the right corner with a powerful strike from the edge of the box. It was 5-0 for the Tigers at half-time.

The team maintained their dominance at second half after key players returned. In the 57th minute, Klein scored his third goal of the evening.

A minute later, junior Gary Bruch put his name one the scoreboard for the second time with a sensitive one-touch finish. In the 60th minute, junior Carlos Martinez dribbled through three defenders and passed the ball to sophomore Justin Brinegar, who scored the eighth goal for the team with a shot to the bottom right corner.

Realizing they were going to stay ahead, coach Brad Hauter replaced half of the team with some of the younger players, but this did not stop the Tigers from scoring. They finished the game with three more goals by junior Zach Leech, first-year Nick Mourouzis and first-year Layken Simkins. The final score was 11-0.

The biggest star of the game was Klein. He attributed part of his success to the support of his fellow players.

“It is really good to see that our offense is high-powered working,” Klein said. “And I want to pay tribute to all of my three goals to my teammates for giving me great passes in the box.”

The hattrick hero also got one assist in the match. Besides Klein, Martinez efficiently led the offense with energy and skillfulness in his plays.

“I thought it was a good result,” coach Hauter said. “It was one of those days when the ball just kept going in for us, but the thing we need to work on is the attention to detail. We took our foot off the gas at moments and disconnected on defensive runs. I was disappointed to see that.”

The big win did not make the team lose their focus.

“The next game is going to be even harder because we are expecting to play at a high level,” said first-year Enzo Sartorio. “We got to continue to play and practice hard to get good results.”

The next game for the Tigers is at Franklin on Tuesday, Sept. 10 at 7:30 p.m. Stay tuned for more updates on our team.