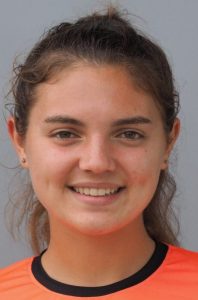 26:00 showed on the clock. The Tigers held a 2-0 lead in the second half over Carthage College, and both teams were showing clear signs of fatigue. A Tiger defender had illegally touched the ball with her hand, leaving only Reanna Stiehler, a freshman goalie from a small town in Florida, in the way of preserving DePauw’s two-goal lead. The opposing Lady Red lined up her shot as Stiehler prepared to throw her body in front of the ball.

Sometimes, players must bail each other out; that’s simply the nature of athletics. This, however, was a game-defining moment. There are only a few chances to score in a soccer game, and this shot would either put the Lady Reds back in contention or put DePauw back in comfortability.

Stiehler stretched. Perfect form and perfect read. It still wasn’t enough. Impeccably placed shots are incredibly hard to block, and there are no metrics for effort and form. Stiehler was not pleased with the goal allowed even though it wasn’t her fault she was in that position. Regardless of the result, she did everything she could for herself and for her team.

That is not an uncommon thing with her.

“In the [goalie] position, you have to take control and be constantly talking. I tend to take charge off the field and it translates in my play,” Stiehler said.

Stiehler describes herself as a perfectionist, which does not work with with the position she plays. She said, “If it’s not perfect, it’s not good enough.” Mistakes from mid-fielders and forwards can be hidden in the minute plays made upfield- goalies’ mistakes are always on full display. How can a perfectionist play a goalie, the only position on the field that is measured solely off her imperfection? She does not take such mistakes lightly. “Every time I make a mistake, it sits there,” Stiehler said. “I’m pretty hard on myself about it, and I try not to make the same mistake again.”

Another way her personality is reflected on the field is through the role she has in the first place. She has an enormous sense of responsibility resting on her shoulders, and her new coach, Kristin Allen, recognizes that.

“We’ve asked a lot from a freshman to come off the line and come out big,” Allen said. “In the first two games, she’s played a little small, and then we’ve challenged her to come out and be huge, and that’s what she has been.”

Allen, a first-year coach, took a big risk by placing Stiehler as the starter, but she has an utmost confidence and sense of determination in Stiehler’s abilities. “We’d rather see the mistakes of her coming out and being aggressive and strong as opposed to her sitting back and being safe,” Allen said.

Claiming a starting role as a first year was no easy task, but Stiehler doesn’t see it that way. “Soccer is my life, and it’s just the same pressure as always. It’s keep the ball out of the net at all costs. Make sure you’re telling your team exactly what to do,” Stiehler said.

Off the field, Stiehler carries herself in a way that’s different than most first years. Her sense of humor is self-deprecating: a common theme for perfectionists. She chose to be a goalie, she says, because “w hen I was a kid, I was too fat and slow to play field, and then I got really good at it.” Her passion levels for soccer are only matched by one thing: her academics. She does not want 99’s on tests; she wants 100’s and anything less is a failure. “I am a perfectionist when it comes to school; I do not like to mess up,” she said. As tired as she can be, schoolwork is on her mind if soccer is not. There is a reason she is an Honor Scholar.

Her daily routine includes a 6 a.m. jog, at least one class every day, an intense homework load, and additional team-mandated workouts or games. What can you say about Stiehler that isn’t every coach’s dream? When asked what she likes to do for fun, she casually replied, “Work out.” She’s dedicated to her craft, mindful of her shortcomings and aims to be the best possible version of herself. Maybe that’s why she’s good at what she does – in her own words, there’s always something that can be better.