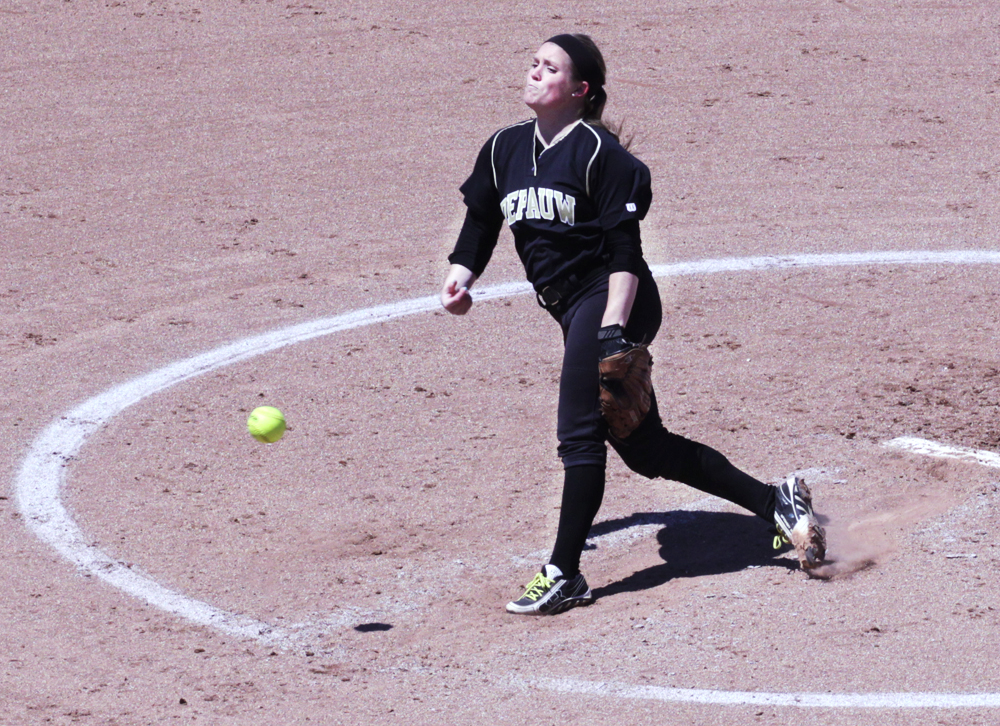 Senior Kahla Nolan pitches during a game agianst Wooster College on Sunday.
The Tiger's kick of the NCAC tournament with a
home game against Denison University on Friday at noon.
ZACH TAYLOR / THE DEPAUW

It’s not often that a softball pitcher goes 11-4 with a 2.11 ERA and punches out 142 batters while playing with an 80 percent torn ACL.

Yet this is the case for first-year Emma Baldwin, who has had to deal with the injury since August.

“I don’t really think about the fact that I have a torn ACL when I am pitching,” Baldwin said, who wears a brace to stabilize the tear. “Sure, it takes a little adjustment because you have to be more careful with where you step…but I don’t notice it anymore.”

Baldwin is only one of the many bright spots in the Tiger’s pitching staff, which has been lights out this season, carrying a team ERA (earned run average) of 2.92 and a 1.40 ERA in conference play.

“Our pitching staff put in a lot of extra work this season,” senior pitcher Kahla Nolan, who is the ace of the staff, said. “Along with the hard work I think that we have really dedicated people and competitive people on our staff who love the game.”

Much of Nolan’s personal success has come from her pinpoint control.

“If she misses a spot, it’s like ‘what happened?’ because she throws the ball, I mean, we’re talking inches,” head coach Erica Hanrahan said. “We don’t throw to areas. It’s not like ‘hey, throw a curveball, let’s see where it goes.’ It’s ‘throw a curveball to one of these nine places'.”

Nolan has also had to deal with her fair share of setbacks. Having been a Type-1 Diabetic since she was nine, Nolan has often had to take time out of practice to fix her blood sugar. On top of this, Nolan has also been dealing with a forearm bruise that developed after the team’s games against Franklin College in mid-March.

“We think that it came from the contact between my arm and hip at the release point in the pitching motion,” Nolan said.

Nolan and Baldwin have developed a special bond that’s helped them both on the mound. Last season, Nolan accounted for almost all the innings pitched for the team. Baldwin’s emergence has helped lessen the workload for her.

“The relationship is, ‘thank goodness I have you’,” said Hanrahan.

“We trust each other pitching and that we will get the job done,” Baldwin said. “Kayla has been a great role model to me…She gives me something to aspire to be.”

It also helps that Hanrahan was a pitcher in college and works as a specialized pitching coach.

“Every practice is a lesson for the pitchers,” Nolan said of Hanrahan’s knowledge of pitching. “She is able to make in game corrections by saying a phrase or keyword that reminds us pitchers to make a self correction to a specific pitch.”

Nolan and Baldwin have become the team’s one and two on the mound over the course of the season.

With Nolan and Baldwin starting most games and combining for over 127 innings, Hanrahan often turns to first-year pitchers Bekkah Roberts and Kaitlyn Holden to come in to relieve the two workhorses.

“The fact that we’ve got KJ [Kaitlyn] and Bekkah to use if anywhere something happens, we are…confident with them,” Hanrahan said. “They’re ready to go…It’s a good comfort zone to have if something happens with [Nolan and Baldwin].

Out of the four pitchers, Roberts has the lowest speed, specializing in off-speed pitches. As a southpaw, she’s brought in to face left-handed hitters in certain situations.

“I give a different look to throw batters off balance,” Roberts said.

Holden also comes in to change things up for batters, who are use to seeing the high velocity that Nolan and Baldwin bring.

This weekend, the team will open up North Coast Athletic Conference tournament play against Denison University (19-17) with a 27-12 record. Expect the pitching staff to play a big part in carrying the Tigers through the tournament.

“If you do not have pitching on your team, no matter how good your offense is, you’re not going to make it as far as…everybody’s goals are,” Hanrahan said. “If you look at the teams left in our conference that made it to…the tournament, it’s the best four pitching staffs.”

That’s not a coincidence.