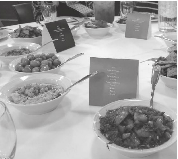 Guests enjoyed a traditional Palestinian dinner at the Prindle Institute
for Ethics Thursday night during a visit from The Conflict Kitchen.
LEAH WILLIAMS / THE DEPAUW

The United States is almost always involved in conflicts with other nations. For many people, it is easy to ignore it. Conflict Kitchen seeks to draw attention to international affairs using food.

Conflict Kitchen is an art project in the form of a restaurant in Pittsburgh that serves cuisine only from countries with which the United states is in conflict. Thursday evening, the Janet Prindle Institute for Ethics hosted co-director Dawn Weleski and culinary director Robert Sayre. Students, faculty, staff and community members could buy tickets to attend the meal and talk given afterward at Prindle. They also gave a public lecture on Monday and worked with several classes and Studio Art majors throughout the week.

“When I saw this job and started interviewing for it, my wife, Sarah Gerkensmeyer, kept sending me wonderful ideas,” he said. “One of those things was Conflict Kitchen.”

Conflict Kitchen frequently hosts functions to further the experience they provide, and sometimes do visiting events.

“We get asked pretty often to go places,” said Sayre. “We don’t as often say yes.”

Sayre explained that, to go somewhere and run an event, they need a large enough kitchen to produce their product.

About every four months, Conflict Kitchen switches the featured country. In the past, they have done North Korea, Cuba, Iran, Afghanistan and Venezuela. They are currently serving Palestinian food, which they were able to prepare and serve at the Prindle Institute on Thursday. Guests received a traditional Palestinian meal that included mezza, or appetizers, and a chicken and couscous dish called maftoul.

Each guest also received a colorful piece of paper that explained Conflict Kitchen, the conflict in palestine and some of the food and customs they were about to enjoy.

During dessert, Weleski and Sayre talked about the origin of Conflict Kitchen and what they do now. Weleski started it with her co-director Jon Rubin. As they were more successful, they were able to hire Sayre. They also can now visit the countries they feature in preparation. Weleski and Sayre were recently in Palestine, where they learned about the customs and recipes, and bought ingredients. They shared a slideshow of their trip with guests, then took questions. Weleski and Sayre invited guests to Moore’s Bar after, for drinks and discussion until 9:30 p.m.

Of those who attended, students seemed to enjoy the event.

“Having Conflict Kitchen come brought us a literal taste of culture many of us will get to experience, and got us thinking of the ethics of conflict,” said sophomore Prindle intern Amy Brown.

Senior Taryn Hampton, who got to work with Weleski and Sayre in her art class, also appreciated her week-long experience.

“It was really a nice way to round out the whole experience and getting the idea of what it means to be involved in social practice as an art form,” said Hampton.