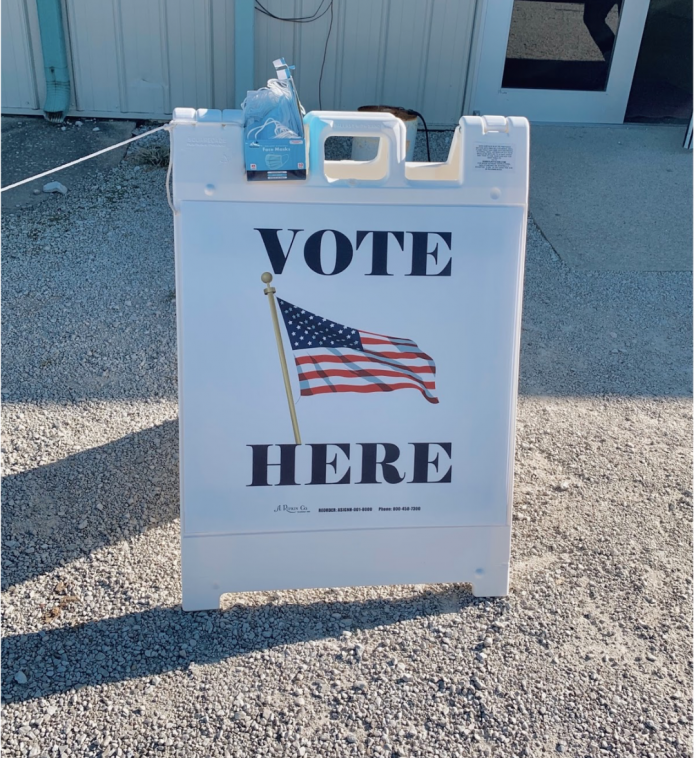 Note: This was written before the presidential election results were announced.

Before the Q&A began, the faculty shared their overall thoughts and expertise about the United States’ political climate in relation to the election.

According to Gellman, the electoral college is a compromise and has been problematic from its start in the 1787 Constitutional Convention. Gellman highlighted that from 1800 to 2000, there were only 3 times that a presidential nominee did not win the popular vote in addition to the electoral college.

If President Trump were to get a second term, it would be the third time this century. “What used to be very infrequent is now becoming all too common,” Gellman said.

Political science professor Dr. Clarissa Peterson criticized the candidates in the election and the history of their words and actions, both in and out of office. “No matter who wins in this election, we have lost as a country,” Peterson said.

Peterson tied the electoral college’s role in electing the next president to the United States history that is intertwined with white supremacy. “White supremacy has a hold on this country that we cannot shake,” Peterson said. “We recognize that it’s ingrained in who we are as America, [but] until we come to terms with that, we can’t really get beyond where we are now.”

Despite the electoral college’s failure to represent voters, Dr. Emmitt Riley, professor of Africana studies, highlighted the role Black people in Detroit and Philadelphia will play in the election for Vice President Joe Biden. “I want to tip my hat to Black people today,” Riley said. ”The votes that we’re waiting to count now are disproportionately coming from majority-Black urban communities.“

The term white supremacy, Riley says, is not exclusive to people who march with the Klan or affiliate themselves with extremist groups. “We don’t talk about the ways in which white supremacy infiltrates itself as a political ideology that the people we love– our colleagues, our neighbors, our family members, our church members–  are participants in and benefit from.”

After the 30-minute introductory conversation, a number of questions were addressed during the next hour in this Zoom session.

Q:  Could the panelists expand on the notion “Regardless of who wins the election, the United States has lost,” and the collapse of democracy?

“Most citizens now have a duty that they didn’t have in the past– figure out how to inoculate yourself from misinformation. If you want a democracy to decline, you need something that is scarier than the collapse of democracy… in this case, I think the writing on the wall is clear that the ‘enemy’ is persons of color, and Black persons in particular. [This was very similar to] Nixon’s ‘Southern Strategy.’ They weren’t even keeping this a secret- [Nixon’s] strategists said in an interview in the New York Times in 1970 that… it was to get as many White people afraid of Black people and their political power, and [have them] quickly run away from the Democratic party and go Republican. And Lindon Johnson, when he signed the Civil Rights Act, he told his chief of staff that [he thinks] they just turned the south over to the Republican party for generations.”

Q: What do we do now? Where do we go from here?

“We go from here with people acknowledging the ways in which white supremacy keeps them in their positions… most White people, in particular- allies, are so busy telling themselves, ‘They’re racist, but I’m not… Just because I voted for Trump does not make me a racist.’ Well, when you look at what a racist is- passive racists are also racists… we’ve got to acknowledge that. Do I think that we will ever acknowledge it? No! Because this president is clever… in making sure that those who don’t understand that connection never will.”

“Stop voting for him!”

Q: Why are the pollsters all wrong?

“They keep underestimating people in rural counties…. There were some Trump supporters who were gonna stay home… but Trump said, ‘Hey, we might lose,’ so they went out and voted. The journalists didn’t realize the depth of white supremacy in this country and the way it can be used as a motivator.”

Q: We struggle between having a partisan discussion and a political discussion. Could you help us understand how to manage a dialogue?

“As a Black faculty member, I occupy a unique position because I’m racialized and I talk unapologetically about issues according to race… In my courses, I don’t necessarily do partisan discussions. It is a discussion about ‘this is what our politics is and these are theories we can use to explain these models, and these are the critiques of these particular theories…’ I don’t get into, ‘Oh, why are you supporting Donald Trump?’ we don’t get into supporting candidates in general… students will say, ‘Oh, I feel that Donald Trump is the greatest person in the world,’ well, I don’t care how you feel- what does the scholarship say?”

“You need to ask yourself if the statement is really partisan or not. If you make everything partisan, then you can’t talk about anything… [For] example… ‘Donald Trump is a facist,’ is not a partisan statement. I’m going to give you the textbook definition of facism: a form of authoritarian… characterized by dictatorial power… there’s no moral content to that whatsoever- it doesn’t say you’re a bad person if you’re a facist- but we’ve crammed the moral content into that word. There are people who’ll look at the textbook definition of facism and [will] prefer that. They’re so afraid of what democracy might yield that they’re [saying], ‘You know what? I’d rather be under the control of a dictator who happens to agree with policies I agree to.’ So, you voted for a facist- but I don’t think that’s a partisan issue.”

Q: Why are there hispanic and latino voters and black voters who voted for Trump when so many of these policies counter the interest of [these people of color]?

“Black people are… very conservative on social issues. Black men, like everyone else, are committed to upholding the patriarchal structure, and I think we see that with Trump’s attempt to appeal… When it comes to latino voters- in particular… there are a lot of [conservatice] Cuban Americans who live in Miami Dade County… We can also connect some of this behavior back to white supremacy and its impact on marginalized communities. The way white supremacy works is that it teaches you to hate yourself and to hate Blackness, and so people- particularly Hispanics that can pass for White- typically will behave differently because they don’t want to seem part of a marginalized community.”

“There also is [a little] research on differences in latinos on how they’ve got here- those who have been here for a while are more ingrained by American ideals and are bothered by those who are just now coming, thinking that they’re trying to get something they do not deserve.”