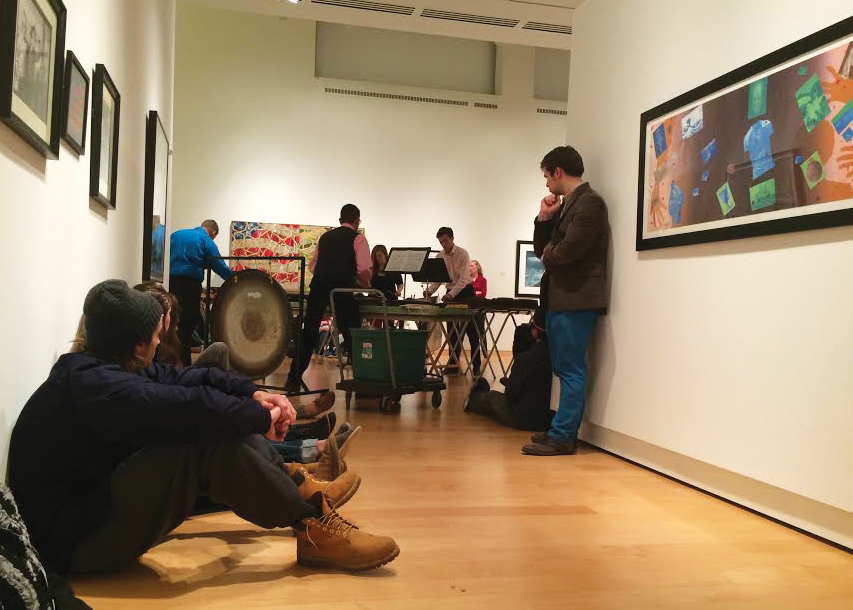 Students listen to music and readings at "Percussion @ Peeler."
LEAH WILLIAMS / THE DEPAUW

Surrounded by art and instruments, students crowded into a small gallery to hear music and readings from their classmates.

“I love how it’s kind of an amalgamation of a lot of different kinds of arts,” said Price. “I thought that was awesome just to bring all of those together.”

Students read original work that fit the mood of the performance and was accompanied and followed by more musical performances.

“I think it was just an opportunity that was presented to Professor [David] Crouse and he just asked, based on the content of the show and the direction that they wanted the music and the writing to go in,” Volel explained. “Sort of taking this mystical, political stance.”

Volel read an original story called “Listen to How the Floorboards Creak.”

Price, who played the flute with the percussion ensemble, looked forward to performing in Percussion @ Peeler. 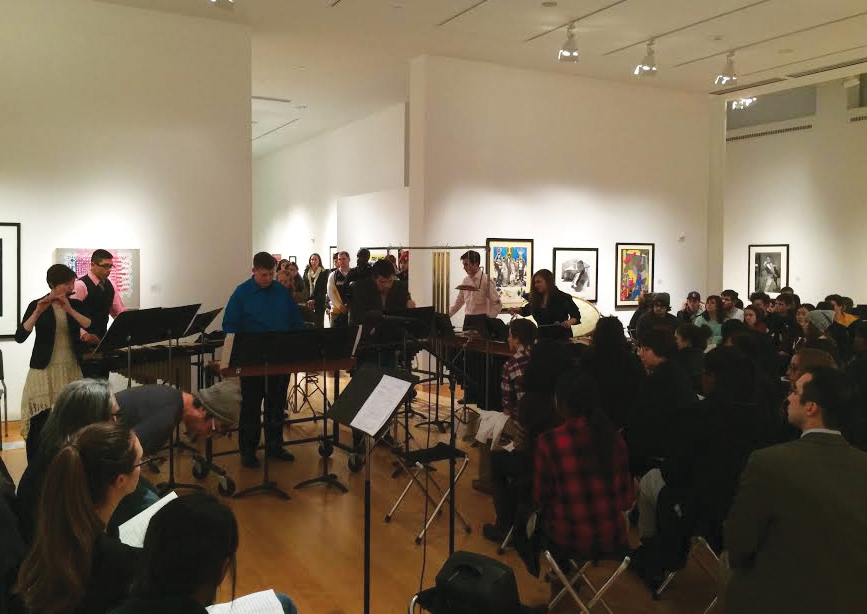 “I did it last year as well, and it was probably one of my favorite performing events of the School of Music of the whole year, so I’m really glad I got invited back,” she said. “I had a great time. I just love playing with other ensembles.”

The director of the performance also participated. Whiting performed the piece  "The Earth Only Endures" by composer Jerome Kitzke, while reciting American texts with an anti-war sentiment from the Tewa (a linguistic group of Pueblo Native Americans), Allen Ginsberg, Walt Whitman and the Lakota (a dialect of the Sioux Native American language).

The event took place among the exhibit “Infinite Mirror: Images of American Identity,” devoted to art depicting issues of assimilation into American culture, examining American subcultures and contemplating the ‘melting pot’ of America. Students were encouraged to move during the event as different people performed and walls blocked the view.

“Percussion @ Peeler is just the best of all of the worlds,” said Mariah Taller, a first-year student and member of the Percussion Ensemble. “It’s art and percussion and creative writing and poetry all in one.”