With just over three weeks until Nov. 3, both parties have been calling on voters to show up for the general election. Millions of Americans have already mailed in their ballot, and millions will show up in-person to the polls.

“I’d like to say to everybody, vote,” Sen. Kamala Harris said during Wednesday’s Vice Presidential Debate. “Please vote. Vote early, come up with a plan.”

In March, after the spread of COVID-19, Wisconsin came under scrutiny for their mishandling of the state’s primary in relation to the virus. Due to a lack of poll-workers, Wisconsin had to close many of their polling places. According to CNN, Milwaukee only had five operational polling places, instead of the typical 180.

States have since looked at regulations regarding voting to create safe and equitably accessible methods for individuals to participate in the election. For DePauw students, their home states’ decision will dictate their options for the election in November.

A number of options are being explored, such as encouraging students and younger individuals to volunteer as elections judges. For example, DePauw students living remotely who feel comfortable are eligible to volunteer. Election judges check voters in, organize ballots and help voters understand how to fill out the ballot. Retirees, most of whom are over the age of 60 and a vulnerable group in the pandemic, have traditionally made up a significant portion of election judges.

The most commonly discussed changes, however, affect voting regulations. Some states have extended early voting in an attempt to minimize the amount of voters who will be in contact with each other. Some states have also increased opportunities to vote by mail. Voting by mail has raised some controversy among political figures such as President Donald Trump, who has scrutinized the validity and security of mailed-ballots.

States that have allowed mail-in ballots before, however, have not reported an increase in voter fraud. Using numbers from the Heritage Foundation’s Voter Fraud database, Amber McReynolds and Charles Stewart III, opinion writers for The Hill, report that 0.00006% of votes cast by mail in the last 20 years have been fraudulent.

According to DePauw’s COVID-19 safety procedures, on-campus students are restricted from non-essential travel. Voting-by-mail has been encouraged.

For out-of-state-students first years like Joseph Sullivan, Brooks Coats and sophomore Lindsay Uhrich, voting by mail is the easier option, regardless of the pandemic. They each described wanting to avoid the hours-long drives it would take to vote in-person.

Sullivan says he knows “some people are voting by mail because they’re worried about in-person voting.” None of the students interviewed expressed concerns about the security of mail-in ballots.

Coats, who has voted both in-person and by mail before, compared the two methods. He says that voting in person is easier because there’s no urge to procrastinate and they’re “picky,” with the formatting for mail-in ballots.

Many students expressed an interest in voting in the upcoming federal election. First-year Elias Alexander said, “I want to vote because it’s one of the handful of ways we can influence the government. There’s petitioning and other things, but voting in particular is so integral to the democratic process that it’s hard to imagine living in our society without doing so. I’m not glorifying its efficacy or anything because voting can feel pretty hopeless, but you should use what’s handed to you.”

Sullivan feels, “it gives you the right to participate in political discussion. If you don’t vote … you shouldn’t complain.”

The federal election will take place on Nov. 3 this year. Registration deadlines vary by state. 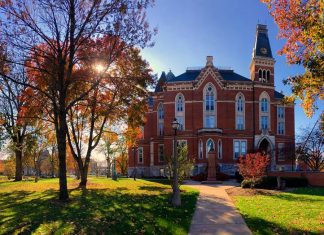 Vanessa Torres - October 28, 2021
0
Due to COVID-19, DePauw no longer had haunted houses in Greek residences, escape rooms at East College, or social events where students could dress...

Advice on the First Night Out

Current Trends in Student High Risk Drug and Alcohol Use

Top 10 Songs to Add to Your Halloween Playlist